About The Holiday Homes 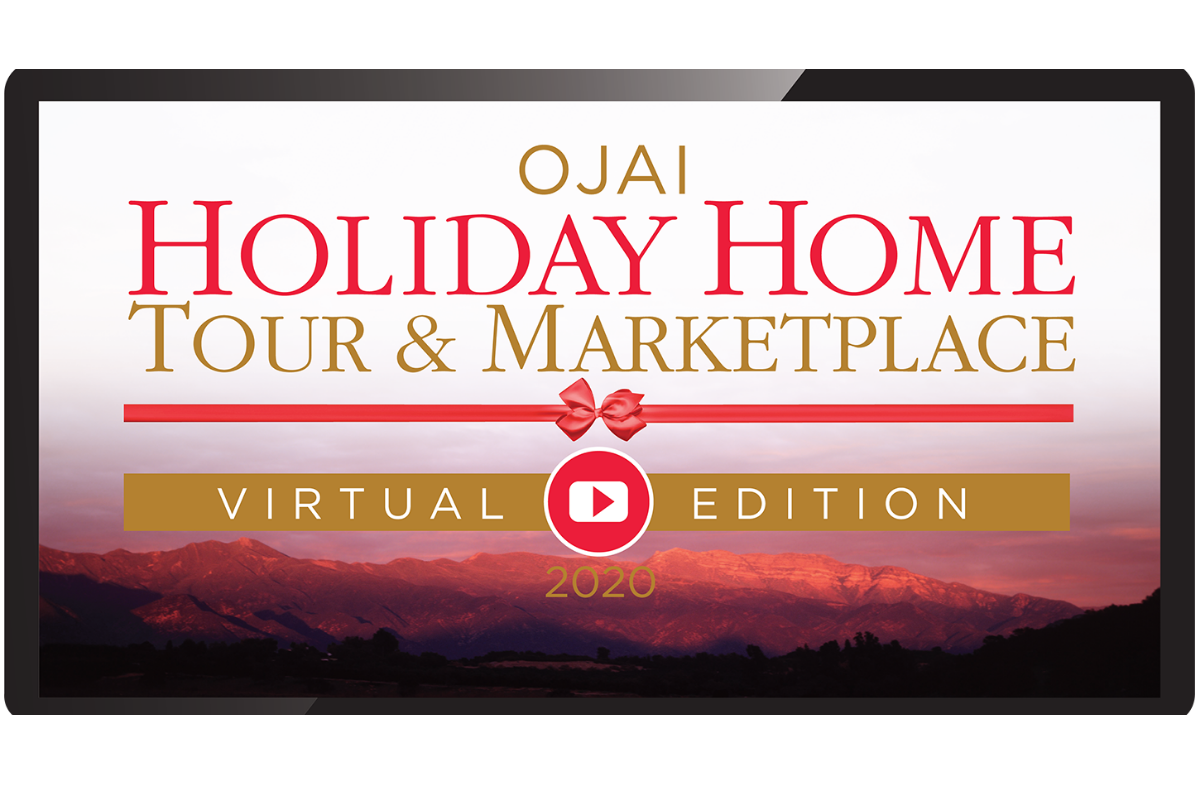 Learn more about this year’s must-see properties that will be adorned with floral inspirations created by local designers.

Be a Designer for our Tabletop Trees & Menorahs 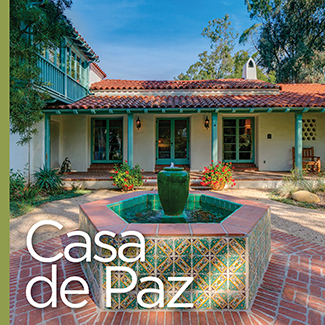 This historical landmark in Ojai’s charming neighborhood, the Arbolada, designed by George Washington Smith, is a classic example of the Spanish Colonial Revival style reminiscent of simple Andalusian farmhouses. Commissioned by Edward Drummond Libbey in the early 1920s as “Spec House A” the house has hosted many fascinating residents, including mafioso Jimmy (the Weasel) Fratiano, the Huyler family of chocolate factory renown, and the son of spy novelist John LeCarre.

Owners Tiese and Robert Quinn describe it in more picturesque terms – ¨elegant simplicity.¨ There is a feeling of understated sophistication with many original architectural details such as the tile roof over high beam ceilings, polished rich wood and old world imported Spanish tile floors that grace the rooms of the home.

The Native American-themed art throughout creates the perfect artistic atmosphere. There are bronzes in several rooms by Allan Houser, Cyrus Edwin Dallin, and Charles Russell. On the walls are a watercolor by actor/artist Buck Taylor and oils by Z.S. Liang as well as local favorite and friend of the owners, Sharon Butler.

The upstairs, now the master suite, has been created from the two original upstairs rooms. Looking down from the wrought iron balcony, or passing through the trio of French doors below, you feel transported to the Spanish countryside. The centerpiece courtyard fountain, adorned by bright Tunisian tiles imported from Spain 100 years ago, welcomes you to a tranquil setting. A saltwater pool is lined with tile by local artisans RTK Tiles.  A separate weaving studio completes the sanctuary, making it the ideal home for the owners, who moved to Ojai after instantly falling in love with a picture as seen in a magazine. When you see this beautiful abode, you will understand why!

SPEC HOUSE “A” — Passing through the wrought iron gate covered by Cecil Brunner roses opens a view of the front of the house sheltered by the majestic oaks which fill the property.  For many years this property was known as “Kathy’s Oaks” for the daughter of Harry Finley, a successful Beverly Hills florist who owned the property at the time.  Many long time Ojai residents still refer to the property this way.  The Peace Guy quietly watches visitors approach.

The approach to the house is on original brick walkways passing the fountain which was placed in front of the covered cloister and the front door.  Although the jar on the fountain is not original, the tile is just as placed in 1921 – 1922 when the house was built.  This tile, along with that of the living room floor and the tile which circles the living room, is original to the house and already old when imported from Spain for the home.

LIVING ROOM — Enter one of the three sets of French doors facing the cloister to be met by the expanse of living room that remains as designed by George Washington Smith with its vaulted and beamed ceiling and fireplace, protected by the large bronze created by Cyrus Edwin Dallin in 1910, called “The Scout.”  The large collection of Native American art is visible throughout the home, much of which is historical.  In a place of honor over the fireplace is an oil painting by contemporary artist, Z.S. Liang, while an oil by Roy Anderson on the facing wall provides a splash of color and action.  An antique bronze of wolves is supported by a Stickley Library Table, one of several pieces in the living room handed down from the owner’s grandparents.

LIBRARY — This cozy room was added in about 1996 along with the three bedrooms and two baths behind it.  Although designed to complement the original, it is just enough different to not be confused as original to the house.  The room contains an oil collage by local artist and friend Sharon Butler which is over the fireplace and an oil by Francis Livingston over the couch.

DINING ROOM — Featuring French doors to the patio and many gardens, the dining room showcases the Steven Handelman lighting fixtures which are throughout the house, the small alcove with a 17th century figure, a printer’s cabinet that was in the owner’s father’s print shop in Los Angeles, and an oil painting featuring Harvest by Tim Soliday over the Stickley sideboard.

The table is set for a time of harvest Thanksgiving during the period of the Harvest Moon.  Wedgwood China “Cream Color on Celedon,” Wallace sterling silver “Lily” from the early 1900’s and inherited from the owner’s grandmother, and Libbey “Mosque Rose” glassware also from early 1900 and hand cut in the basement of the Libbey Glass.  The owners always include an unused place setting for those who have walked on.

MASTER BEDROOM — The master suite was created from the two bedrooms and bathroom that originally were the only bedrooms in the home with the exception of the maid’s quarters.  A Billy Scheck oil faces the bed while dolls made by the owner’s mother during WWII are above the bed.  Over the bathtub is a painting by Bill Bender called Bringing home Christmas.

OUTDOORS — The Pool is salt water and the pool tile is by local RTK Tile Studio. 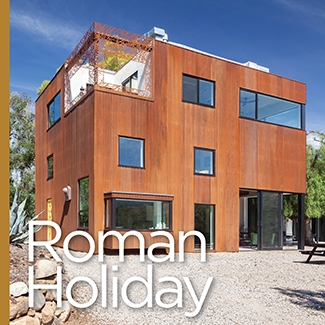 After receiving the prestigious Rome Prize in 2008, architect Fred Fisher and his wife, Jennie Prebor, along with sons Henry and Eugene, spent a transformative year in Rome. Returning to Los Angeles, they found nine acres with an olive grove hidden away at the edge of Ojai with gorgeous mountain and valley views that inspired them to choose the site despite its derelict condition. While the house was being planned Jennie established a store on the Arcade, BlancheSylvia, and the boys attended Ojai Valley School.

This is the home a renowned architect designs for his own family – an oasis of comfort for their friends as well as a gorgeous venue for community fundraisers.  The three-story “box on a hill.” covered with rusted corrugated metal, is reminiscent of the Tuscan villas on hilltops that left such an impression on them. From this perch, the views on all sides are breathtaking, and the light dances throughout – the perfect spot to savor a Pink Moment.

Unique touches abound in every corner – brightly colored rugs and pillows delight the eye, accenting the bright primary colors – a fire-engine red kitchen island, custom cabinetry by artist Roy McMakin, a yellow Dutch door, and purple sofas.  The home is adorned with an eclectic collection of works by Ojai artists including John Nava, Guy Webster, and Beatrice Wood. The furnishings were carefully curated for aesthetics and ambiance. A cozy upstairs nook with fireplace and bookshelf-lined sitting area invites quiet reflection or family interaction. The laser-cut steel stair railing is a work of art in itself. A stargazing deck adjoins the bedroom. The home respects the ¨legacy¨ property that they are committed to preserve for the Ojai we all value so dearly.

Footnotes from the owners, Fred Fisher and Jennie Prebor:

ARTWORK — The Cougar & Bird painting in vestibule is by Tim Ebner, and the tapestry is by Ojai artist John Nava. The piece is a test weaving for a Commission in Princeton’s Firestone Library, for which we designed the renovation.

The flag is a family heirloom, an 1874 ensign. My great grandmother (Fred’s) was married under it. The map is a print of a high resolution scan made by the “Nolli Map project “ of University of Oregon and Stanford led by Erik Steiner. The photo on metal in the vestibule is by William Bailey and small Chuck Arnoldi by window.

The green photo in the library is by Guy Webster & used for a Procol Harum album cover, next to Karl Blosfeld flower photo.

(Fred’s) My watercolor of house concept on black chest next to dining table. 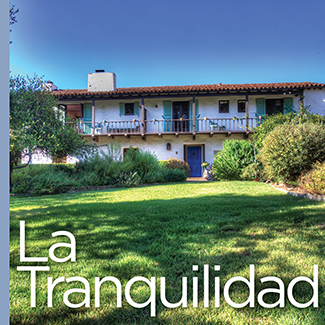 In 1929, Austen Pierpont designed this Spanish Colonial style home on four of the original 60 acres of Country Club Estates, to recreate the look of Santa Barbara in Ojai. Original owners Mary and Roger Bard, who christened the place La Tranquilidad, planted many oaks, as well as the pomegranate tree which still adorns the courtyard. Pierpont recreated the traditional Monterrey style of whitewashed walls, with balconies running the full length of the house in front and back. Large windows set in thick adobe walls make the bedrooms bright and offer splendid views of the scenic mountains and upper Ojai Valley, framed by lush trees and bright landscaping. Contrasting the white walls are dark hardwood floors and bannisters, built-in cabinetry and bold original tiles, all adding to the charm and authenticity of the home.

The house is currently home to Linda Granat. She and her late husband Frank purchased the home in 1991 when they were looking for a retreat from their life in New York where they own the legendary Knickerbocker Restaurant. Linda knew the minute she walked up to the house it was where she wanted to live. Around every corner are serendipitous spots inviting moments of peaceful respite or social gatherings – coffee patios, outdoor dining and picnic spots, book nook window seats, four swings suspended from huge trees – and stone pathways meandering in every direction, beckoning you to wander and discover. An old rock oven sits sentinel over the tranquil view, while notes from the Steinway grand piano waft on the breeze.

Linda has brought a bit of French flavor to the Spanish home, including a collection of French posters collected by her husband Frank. The poster once hung in their New York apartment but now lines the elegant stairwell of the home. Whimsical folk art adds color and charm to every room. Not far from the center of town, but feeling like miles away from everything, this iconic piece of Ojai architecture personifies its original name, La Tranquilidad.

Footnotes from the owner, Linda Granat:

In the dressing room art by Ojai artist Elisse Pogofsky-Harris and her work is also in the dining room between the windows.

ABOUT FRANK GRANAT — Born in San Francisco, Frank was the son of one of the founders of Granat Brothers Jewelers. After graduating from Stanford University in 1950, Frank went on to a long and successful career as a Broadway producer and restauranteur in New York City, establishing the famous Knickerbocker Bar & Grill. A favorite in Greenwich Village, the Knickerbocker was known for its jazz and was a favorite among many celebrities from Alec Baldwin and Chris Noth to Ben Stiller, Jessica Lange and Susan Sarandon.

Be a Designer for our Tabletop Trees & Menorahs