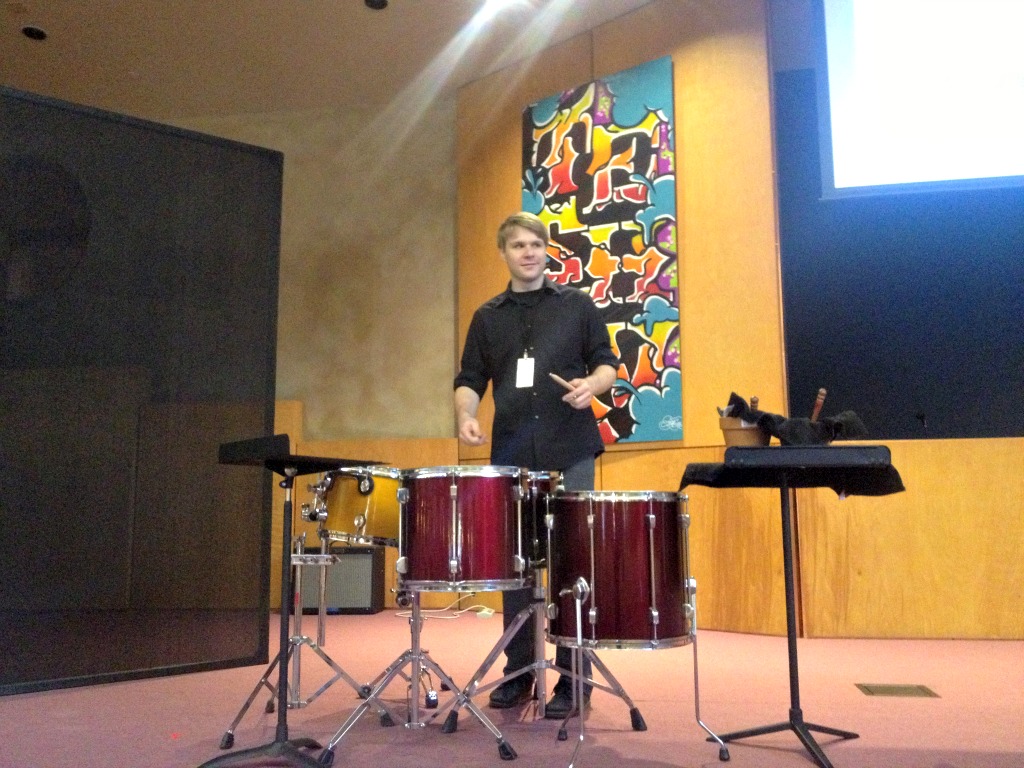 Percussionists can play trees, hit sticks together, make music with bones or buildings or bricks – and they do.

What with rehearsals, late night and talk and early morning and pretty much anytime performances this year, the members of red fish blue fish can be hard to track down. But doctoral student Dustin Donahue, who’s the lead for the ensemble at OMF2013, sat down for an in-depth chat about cool percussion instruments, the (short) history of the percussion ensemble, and his own percussion goals.

Dustin, tell me about your involvement in red fish blue fish.

I joined four years ago. The group consists basically of Steve Schick‘s students [at UCSD], so it’s a rotating roster.

How did you get started in percussion?

I played piano for most of my life …

Do you think of the piano as percussion?

I do consider it a percussion instrument. You see that with Lou Harrison specifically and with this festival. Every now and then I do end up playing the piano still, but at some point I switched to being a rock ‘n’ roll drummer as a youngster.

In high school I got tired of playing in band – it’s always transcriptions and stuff you’re playing along with the band. I got interested in the birth of the percussion ensemble in the ’30s and ’40s. I found John Cage’s Credo in Us, and a few friends of us put it on. Then the door opened, and I fell in.

I grew up outside of Chicago and did my undergrad at the University of Wisconsin, in Madison. I did a lot of orchestral playing, but by the end of my time there, I’d come to know Steve’s playing. It was always a goal to come meet up with him at some point, and then it was a dream come true to be in the group and be working with him.

How many times have you been to Ojai?

This is my third year. It’s almost like a summer home now.

It’s provisional, Steve can’t be here, so the way red fish blue fish works, I’m a leader right now. Every project we do, one of us is the organizing person, and I happened to get this one.

What are you experiencing with the Festival this year as you’re rehearsing and getting ready for all of these concerts?

There’s a couple of threads I really appreciate [at Ojai], one of which you’re seeing with the concerts we’re doing some of the earliest percussion music — the Cage music, the Harrison fugue: the foundation of our instrument. Along with a  couple of other people from the 1930s, Cage and Harrison are the foundation of the percussion ensemble.

Ojai’s trying to trace a lineage from that West Coast explosion in the 1940s to the ’60s, with Terry Riley, to people like John Luther Adams who are in some ways taking up that lineage, that sort of West Coast experimental music tradition.

There’s definitely something in the air out here that puts that music in context.

I guess we’ve been talking about this a little, but how do you think Ojai teaches musical history?

The thing that encapsulates all of that [this year] is “Strange and Sacred Noise” by John Luther Adams – every movement of the nine movements is dedicated to  now-legendary, mostly West Coast composers. That piece in particular, he’s sort of looking back at all of his influences and all of his mentors, all of whom wrote extensive percussion music. That piece looks back at that experimental tradition through percussion writing.

Talk to me about the most interesting instruments you’re using this year.

Certainly, the Cage concert on Saturday –  it’s going to have the most audience coming up to the stage.

Third Construction is like a museum of unusual instruments. I’m playing actually a donkey’s jaw, a Peruvian percussion instrument. That piece in particular draws a lot of attention.

I think as a percussion group, we’re fascinated by Strange and Sacred Noise. It takes traditional instruments like tam-tams. The tam-tam movement always strikes me – it’s just a quartet of tam-tams, and we’re used to hearing that as the climax of an orchestral movement, but here it’s 10 minutes straight, tam-tams making long, sustained tones.

It’s moments like that, these little things that let us explore our einstrument in a different way or hear it in a different context, that are particularly exciting for us.

He takes the siren, almost always only used in [Edouard] Varèse’s music, and puts it into a a movement – long, sustaining waves of sirens.

Is there anything totally new for you this year?

New for us would be this Lou Harrison organ concerto. He was always looking to percussion to find new sounds; he loved the gamelan but didn’t necessarily want to directly take that instrument since it’s not his culture. He wanted to find an American idea of the gamelan.

One of the things I love, one of the greatest instruments of this weekend, Harrison calls them great bells: They’re oxygen tanks that have been sawed off and hung. They make a beautiful sound; there’s nothing else like it.

I think a lot of [percussion] is about exploring sound and finding that in any resources you have available to you. Both Harrison and Cage are drawing from both [natural and urban] worlds. [This weekend,] Credo in Us has a buzzer, tin cans, a phonograph — and a couple of pieces later, there’s a piece called Inlets, producing these gurgling sounds, shells filled with water. We’re enjoying the sounds of humans and the sounds that are naturally produced.

Are you a composer as well?

It’s happened a couple of times, but I wouldn’t call myself a composer. What I do mostly, a big part of my own creative work, has been this moment in the 1960s where they’re called open scores. There’s an indeterminiate element in its notation or instruction, and you have to fill in a substantial amount of information to make the performance. John Cage has a piece called Variations 2; it just consists of points and lines on transparencies.

I’m very interested in these pieces that require the performer to have a substantial amount of creative input, and where I might have to bring an instrument or a complex number of instruments. With these open pieces that I do a lot of work with, the composer provides a loose set of guidelines, and I provide my own interest and background. There’s something I find really fascinating about this proess. It gives me a way of working with John Cage.

So the musical life of a percussionist is quite different from that of most musicians in a traditional orchestra or even in less traditional groups.

We’re in a very different place than the violinists and cellists of the world. Our oldest solo piece is now, let me do some quick math, 1956, 57 years, that’s really a person’s lifetime, and we’re in a very different place. Percussion is one of the world’s oldest and first instruments, but as far as our classical music tradition goes, it’s one of the newest and least defined, which is one of the fascinating things about being part of it right now.