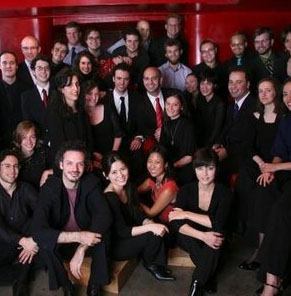 The Knights are an orchestral collective, flexible in size and repertory, dedicated to transforming the concert experience. Driven by an open-minded spirit of camaraderie and exploration, they engage listeners and defy boundaries with programs that encompass their roots in the classical tradition and passion for musical discovery. For their outstanding virtuosity, innovative programs, and bold mission, The Knights are at the forefront of “the future of classical music in America” (Los Angeles Times).

The Knights’ 2013-2014 season features a collaboration with the Mark Morris Dance Group at Austin’s Texas Performing Arts, a weeklong residency at Dartmouth College, return engagements at Ravinia, Caramoor, and Central Park (their sixth consecutive season at the free Naumburg Orchestral Concerts), and a continued partnership with WQXR-New York Public Radio resulting in live broadcasts throughout New York City. In October, The Knights premiere a Concerto for Santur, Violin, and Orchestra by artistic director Colin Jacobsen and Silk Road virtuoso Siamak Aghaei, followed by a performance and live recording at Dumbarton Oaks in Washington, DC, featuring Stravinsky’s “Dumbarton Oaks” concerto on the work’s 75th anniversary. In the spring, The Knights embark on the orchestra’s fifth European tour with a return to the Dresden Music Festival and appearances across Germany. The orchestra will debut at the renowned Ojai Festival and Berkeley’s Cal Performances, featuring the world premiere of a new opera by Steven Stucky and Jeremy Denk, under the baton of Robert Spano.

The Knights launched the 2012-2013 season with three concerts at the Ravinia Festival, where the orchestra was joined by Yo-Yo Ma, Itzhak Perlman, and Dawn Upshaw. Other highlights were a collaboration with the Joshua Redman Quartet at Town Hall, a US tour with pipa virtuoso Wu Man, and a return to the Naumburg Bandshell, where they premiered a new work created together by members of ensemble. In December 2012, Artistic Directors Colin Jacobsen and Eric Jacobsen were selected from among the nation’s top visual, performing, media, and literary artists to receive a prestigious United States Artists Fellowship.

Recent recordings include an all-Beethoven disk released in January 2013 by Sony Classical, their third project with the label; 2012’s “smartly programmed” (NPR) A Second of Silence (Ancalagon), which debuted among iTunes’ top ten classical recordings; a live recording with cellist Jan Vogler of the Shostakovich Cello Concerto No. 1 alongside arrangements of Shostakovich waltzes and Jimi Hendrix’s “Machine Gun”; and New Worlds, featuring works by Copland, Dvorak, Ives, Gabriela Lena Frank, and Osvaldo Golijov. In 2010, Orange Mountain Music released Lisa Bielawa’s Chance Encounter with The Knights and soprano Susan Narucki. Mozart, the ensemble’s collaboration with Lara and Scott St. John in the Sinfonia Concertante and Violin Concertos Nos. 1 and 3 for Ancalagon, received a 2010 JUNO Award for Classical Album of the Year. Strings magazine proclaimed, “These gifted young players have created a flawless recording.” The Knights can also be heard on the soundtrack for Francis Ford Coppola’s film Twixt.

The roster of The Knights boasts a remarkable diversity of talents. Members are composers, arrangers, singer-songwriters, and improvisers who bring a range of cultural influences to the group, from jazz and klezmer to pop and indie rock music. The musicians are graduates of Juilliard, Curtis, and other leading music schools, and members have performed as soloists with leading orchestras worldwide. Active as chamber and orchestral musicians, they participate in the world’s most prestigious music festivals, including Marlboro, Tanglewood, Verbier, Lucerne and Salzburg, and perform with the Royal Concertgebouw Orchestra, Metropolitan Opera Orchestra, Philadelphia Orchestra, Milwaukee Symphony, Toronto Symphony, New York Philharmonic, and Yo-Yo Ma’s Silk Road Ensemble.

The Knights evolved from late night chamber music reading parties with friends at the home of violinist Colin Jacobsen and cellist Eric Jacobsen. The Jacobsen brothers, who are also founding members of Brooklyn Rider, serve as artistic directors of The Knights, with Eric Jacobsen as conductor. The unique camaraderie within the orchestra retains the intimacy and spontaneity of chamber music in performance.