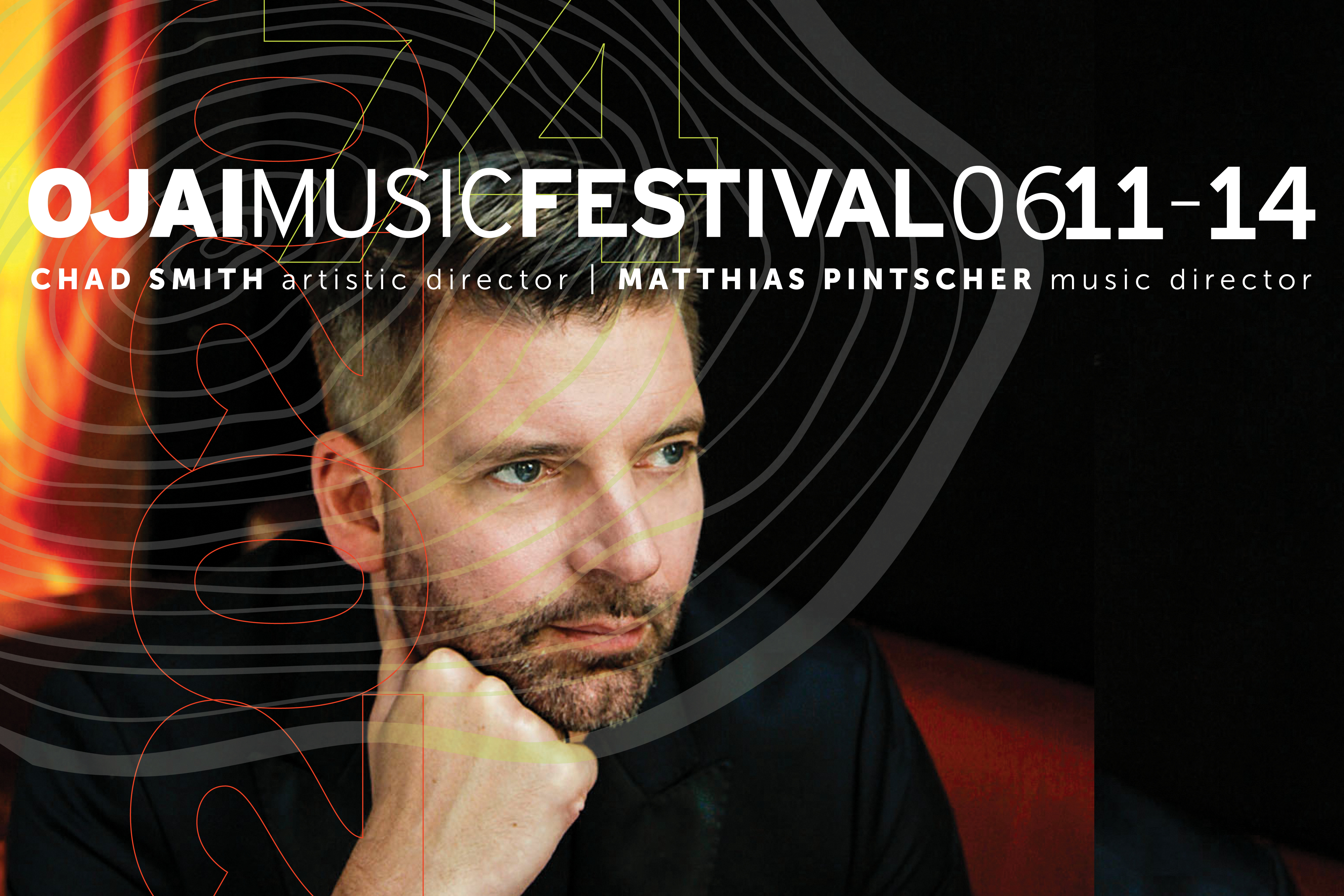 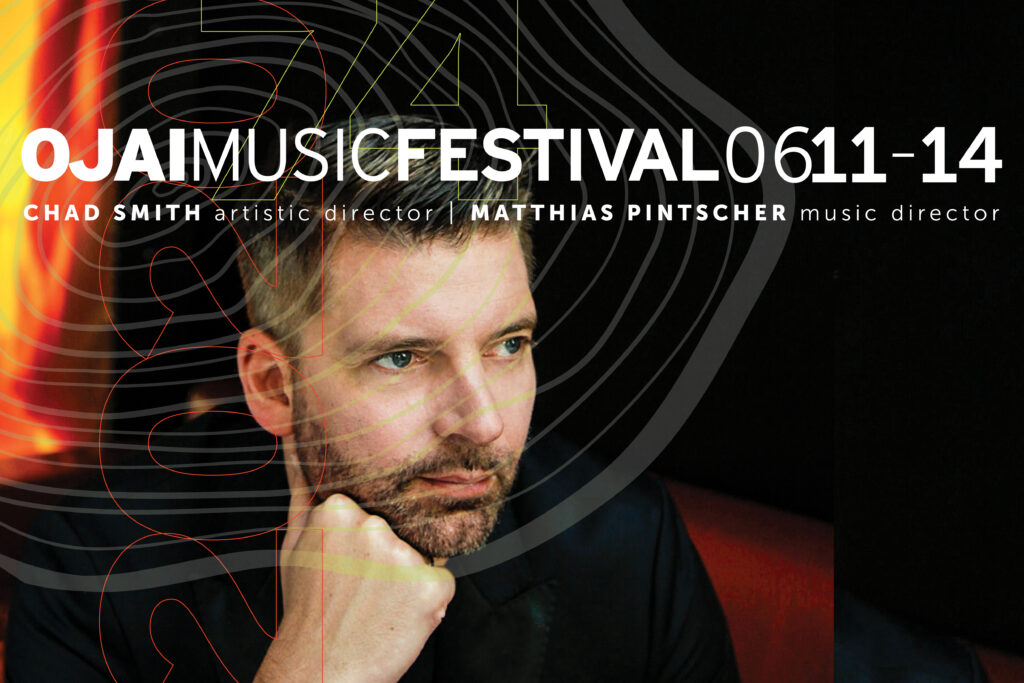 The 2020 Festival celebrates Pintscher as composer, conductor, and collaborator; welcomes the residency of his Ensemble intercontemporain (EIC) in its first Ojai appearance; and anticipates the return of the Calder Quartet

Building connections between today’s most progressive composers and those from the past six centuries, the Festival explores the sonic worlds of Matthias Pintscher, seven-time Ojai Music Director Pierre Boulez, and composer Olga Neu-wirth with highlights:

The 74th Ojai Music Festival, June 11-14, 2020, celebrates Music Director Matthias Pintscher as composer, conductor, and collaborator, and his commitment to strengthening the interactions and connections between the music of today and seminal works from across the centuries.

Joining Mr. Pintscher will be the Ensemble intercontemporain (EIC) in its first appearance at the Ojai Music Festival. Mr. Pintscher is Music Director of the EIC, the world’s leading contemporary music ensemble founded by seven-time Ojai Music Director Pierre Boulez. The 2020 Festival welcomes the return of the Calder Quartet and the LA Phil New Music Group, plus the Ojai debuts of mezzo-soprano Tamara Mumford, tenor Andrew Staples, and singer/songwriter Della Miles. Matthias Pintscher said, “Since I received the invitation to serve as Music Director for the Ojai Music Festival, I am in an inspiring state of excitement, passion, and curiosity on all imaginable levels. Ojai is truly a magical place that allows all of us to find out more about ourselves. Here we can take risks, be bold, be introspective, and dare to wade towards the unknown, even the big unknown inside ourselves. Working and living in NYC and Paris I naturally wanted to create the vision of building a musical “invisible bridge” between two equally strong musical cultures – how they clash with, and yet complete each other today. It is a journey and it is my privilege to take you by the hand and to walk with you in this beautiful sonic garden where we are all invited to explore and discover together.”

Matthias Pintscher said, “Since I received the invitation to serve as Music Director for the Ojai Music Festival, I am in an inspiring state of excitement, passion, and curiosity on all imaginable levels. Ojai is truly a magical place that allows all of us to find out more about ourselves. Here we can take risks, be bold, be introspective, and dare to wade towards the unknown, even the big unknown inside ourselves. Working and living in NYC and Paris I naturally wanted to create the vision of building a musical “invisible bridge” between two equally strong musical cultures – how they clash with, and yet complete each other today. It is a journey and it is my privilege to take you by the hand and to walk with you in this beautiful sonic garden where we are all invited to explore and discover together.”

Artistic Director Chad Smith commented, “Here in Ojai you will find an oasis of music making of the highest caliber in a relaxing and openhearted environment. Audiences and artists create memorable moments together – moments of discovery and of deep listening, and moments when we realize we are hearing the future of music play out in front of us. This journey, where music of today interconnects to seminal musical moments of our great tradition, requires a bold guide, an imaginative programmer, and an enthusiastic advocate. Therefore, I am thrilled to welcome Matthias Pintscher, one of today’s singular composers and most sought-after conductors, as Music Director. Matthias embodies Ojai’s commitment to adventurous music making and to introducing virtuosic artists to our community. This year we will meet his extraordinary Ensemble intercontemporain. Their arrival is both an exciting first and a powerful connection to Ojai’s storied past. Alongside works by Matthias, Boulez’s provocative and riveting music will be a featured thread across the Festival, as will the music of Olga Neuwirth, one the most brilliant composers of our time.”

Chad Smith, who serves as Ojai’s Artistic Director for the 2020 Festival, was named in October to the position of CEO for the Los Angeles Philharmonic. As announced last month, Ara Guzelimian will serve as Ojai’s next Artistic Director beginning with the 2021 Festival, following Mr. Smith’s decision to step away from Ojai, given his recent appointment. Details for Mr. Guzelimian’s first Festival – the Ojai Music Festival’s 75th – will be announced in 2020.

Based in Paris, Ensemble intercontemporain is considered one of the leading performance organizations devoted to contemporary new music and was founded in 1976 by former Ojai Music Director Pierre Boulez. Now led by Mr. Pintscher, EIC’s 31 soloists share a passion for 20th to 21st century music and collaborate closely with composers of today to explore instrumental techniques and develop projects, which interweave music, dance, theater, film, and the visual arts. EIC last appeared in the US in 2015 for Mr. Pintscher’s inaugural year as their music director. Their last Los Angeles appearance was in 1986 with Pierre Boulez.

The Calder Quartet, which made its Ojai debut at the 2015 Festival with Music Director Steven Schick and returned in 2016 with Music Director Peter Sellars, will present during the 2020 Festival a thoughtfully balanced mix of new and old works for the Ojai Dawns and Libbey Bowl concerts. The Calder will perform a wide range of works by Olga Neuwirth, Matthias Pintscher, Cage, Schubert, and Ives. Hailed as one of American’s great quartets, the Los Angeles-based Calder Quartet is currently composed of violinists Benjamin Jacobson and Tereza Stanislav, violist Jonathan Moerschel, and cellist Eric Byers. Violinist Tereza Stanislav joined the quartet in 2019, replacing Andrew Bulbrook who was an original member of the quartet. Founded in 1998 at the University of Southern California, the group takes its name from American sculptor Alexander Calder.

Since the first concert in 1981, the LA Phil New Music Group has performed works by some of the sharpest minds in composition. Their Ojai appearance in June 2020 marks a return after nearly two decades, performing Steve Reich’s seminal Tehillim on Friday, June 12.

The 2020 Festival will feature the Ojai debuts of several performers. Singer/songwriter Della Miles, who created the role of Eleanor in the world premiere of Olga Neuwirth’s opera American Lulu at the Komische Oper Berlin in 2012, will reprise her role on opening night, Thursday, June 11, in the Suite for Eleanor. Mezzo-soprano Tamara Mumford and tenor Andrew Staples will be the featured soloists in Mahler’s Das Lied von der Erde arranged by Glenn Cortese on Sunday, June 14. 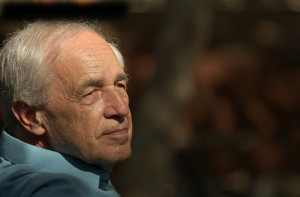 Known as one of today’s foremost composers, Matthias Pintscher will have his works interspersed throughout the 2020 Festival, including Bereshit, Nur, Uriel, and 4° quartetto d’archi Ritratto di Gesualdo. In addition to his music directorship of the Ensemble Intercontemporain founded by Pierre Boulez, Mr. Pintscher’s connection with Boulez was a deeply personal friendship and an interwoven professional path that also included their respective roles with EIC, IRCAM, the Lucerne Festival Academy, and now the Ojai Music Festival. Boulez’s works to be performed by EIC include his sur Incises and Mèmoriale.

The 2020 Festival also shines a light on the work of the prolific, ingenious, daring, and deeply relevant work of Austrian composer Olga Neuwirth. Three of her major works will be performed during the Festival with EIC, Calder Quartet, and singer/songwriter Della Miles including Suite from Eleanor, which received its premiere in 2015 at the Salzburg Festival. Additional featured music of Ms. Neuwirth during the Festival will include in the realms of the unreal performed by the Calder Quartet and Aello – ballet mécanomorphe with the EIC.

Prior to the start of the 74th Festival in Ojai, an Ojai Music Festival Preview Concert at the LA Phil’s Noon to Midnight on June 6 will offer the US Premiere of Ms. Neuwirth’s Le Encantadas o le avventure nel mare delle meraviglie. Mr. Pintscher will conduct the EIC with members of IRCAM (Institute for Research and Coordination in Acoustics/Music), also founded by Boulez.

IRCAM is a Paris-based public research center dedicated to both scientific research on sound and the creation and transmission of music. Ms. Neuwirth’s Le Encantadas o le avventure nel mare delle meraviglie is inspired by Herman Melville’s descriptions of the Galapagos Islands and the sounds of Venice, the city of islands. The performance, which requires the capacities of an indoor venue, will utilize the full Walt Disney Concert Hall placing musicians throughout the Hall. . Prior to this US concert, Ms. Neuwirth’s Le Encantadas has been performed in Europe, including at the Philharmonie de Paris (2015), the Lucerne Festival (2016), and most recently, the Elbphilharmonie in Hamburg (2019). This Ojai Preview Concert will be the first appearance of an Ojai program as part of the LA Phil’s Noon to Midnight.

Chad Smith commented, “Olga’s spatial work, Le Encantadas o le avventure nel mare delle meraviglie, is a work of extraordinary imagination and technical brilliance. It is also a deeply affecting work requiring a special acoustic environment – one tailor-made for Walt Disney Concert Hall. With EIC in residence at Ojai, Matthias and I thought a perfect way to kick off the Ojai Music Festival this year was to present Olga’s work at the LA Phil’s Noon to Midnight festival.” 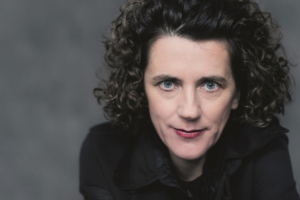 The last time Ms. Neuwirth’s works were performed in Ojai was in 2002 with the world premiere of Incidendo/fluido for piano with pianist Marino Formenti. “Thrilling and ingenious, Neuwirth’s works are musically innovative, socially and politically critical and ethically earnest. They are an expression of her convictions and her finely honed sense of justice, capturing almost every conceivable genre and mood: from light to dark, brutal to tender, tragic to comic, real to imagined, social to existential. Olga Neuwirth has at times risked being ostracized by the music world and society in general for what she believes. Yet she does not let this discourage her, but pushes herself to step outside her comfort zone and cut across categories to embrace people and affinities of every imaginable race, age and gender,” wrote Catherine Saxon-Kerkhoff (Berlin 2015) of Ms. Neuwirth.

The Genesis Cycle
In celebration of the EIC’s 40th birthday in 2017, Matthias Pintscher curated the Genesis Cycle by inviting seven composers from seven different countries to write a new, approximately ten-minute work capturing one of the seven days of Creation. The pieces reflect the Old Testament’s telling of how the universe came to be, as well as the composers’ own creative process of musical imagination. For the Ojai performance and US premiere, Genesis Cycle will include the world premiere of an eighth day with a new work by Japanese composer Toshio Hosakowa, entitled The Flood. The first seven days comprise works by Mark Andre, Franck Bedrossian, Chaya Czernowin, Joan Magrane Figuera, Stefano Gervasoni, Marko Nikodijevic, and Anna Thorvaldsdottir. This joint project is a compelling panorama of composition in the present day with various stylistic leanings.

Furthering the dialogue between new and old music, the Festival will explore Mr. Pintscher’s interest in Mozart with a performance of the Gran Partita, as well as Mahler’s Das Lied von der Erde, Bach’s Brandenburg Concerto No. 4, and Gesualdo’s arrangement by Sciarrino.

Free Concert for the Community
The 2020 Ojai Music Festival will culminate on Sunday afternoon with a free concert event for the community at the Libbey Bowl with the Calder Quartet and guest artists. It will feature the music of Angélica Negrón, Gabriela Ortiz, Copland, and Stravinsky. Additional program details will be shared in the spring of 2020.

Ojai Talks
The 2020 Festival begins with Ojai Talks hosted by Ara Guzelimian, who will return as Ojai’s Artistic Director with the 2021 Festival. On Thursday, June 11, a series of discussions will begin with an exploration of the 2020 Festival programming and its connection with the sonic world of Pierre Boulez. More on-site and online dialogue during the 2020 Festival includes Concert Insights, the pre-concert talks at the Libbey Bowl Tennis Courts with Festival artists. Pre-concert interviews with artists are also broadcast through the Festival’s live streaming programs.