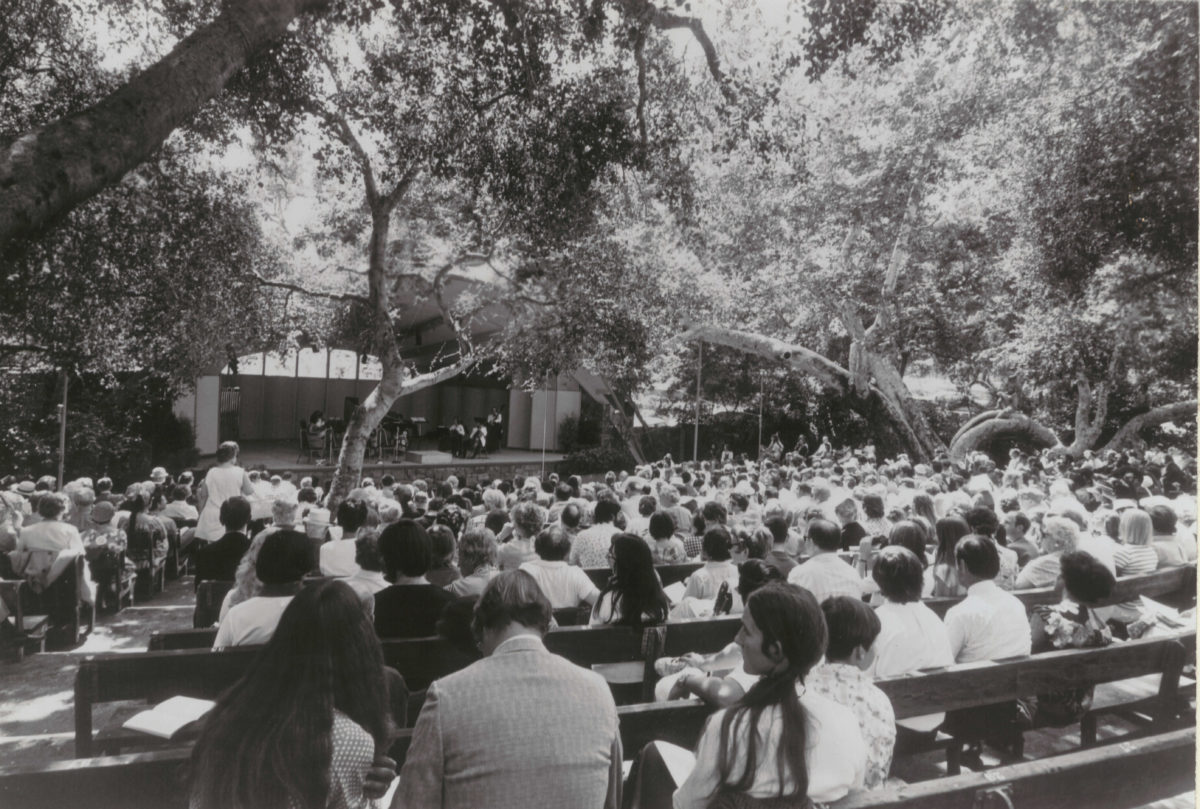 For seven decades, the Ojai Music Festival has been a laboratory for the special chemistry that results from combining insatiable curiosity with unbounded creativity. The formula is simple: Each year a music director is given the freedom and resources to imagine four days of musical brainstorming. Some have approached their task with caution, fearing that Ojai might be like other places. But, of course, it’s not. More often this unique blend of enchanted setting and an audience voracious in its appetite for challenge and discovery has inspired a distinguished series of conductors, performers, composers to push at boundaries and stretch limits.

At its inception in 1947, under the guidance of Festival founder John Bauer and conductor Thor Johnson, the Festival featured a balance of classics and more contemporary fare. By the time Lawrence Morton took over as Artistic Director in 1954 the emphasis had shifted to new music and Ojai soon became the showcase as well as a home-away-from-home for such 20th century giants as Luciano Berio, Pierre Boulez, Elliott Carter, Aaron Copland, Lou Harrison, and Olivier Messiaen, not to mention two Southern California “locals”: Arnold Schoenberg and Igor Stravinsky. It was Morton who established the tradition of rotating Music Directors and with this innovation each year’s Festival became the reflection of a succession of larger-than-life personalities, including Robert Craft (joined in 1955 and 1956 by Stravinsky), Copland, Ingolf Dahl, the late Lukas Foss, Boulez, Peter Maxwell-Davies, as well as such rising stars as Michael Tilson Thomas, Calvin Simmons, Kent Nagano, John Adams, Esa-Pekka Salonen, Pierre-Laurent Aimard, and David Robertson. Through the years Ojai’s Music Directors have invited distinguished soloists, first-rate chamber ensembles, and world-class orchestras to join them in exploring the intersection between new music and everything from jazz and improvisation to electronics and computers; dance, theater, and experimental staging to social and political issues, not to mention repertory that might go back to the Middle Ages or reach across the globe.

Looking back, it would be difficult to identify any overarching aesthetic premise, though from year to year there has been no shortage of agendas. Rather, the thread running through these past decades has been this Festival’s consistency in promoting creativity and innovation. Here in Ojai hallowed masterpieces and in-your-face experiments can be uneasy bedfellows sharing a berth that is a pedestal of repose for one, a trampoline for the other. And that rumble you hear? It is the steady grumbling from an audience whose outspoken views on any and every subject are the entitlement of its loyalty. Its passion is the true barometer of the health of this Festival. No smugness here; no indifference, either. This is a place for enthusiasms, often excessive, and opinions, sometimes vociferous, and a hunger for shared discovery that reaffirms, year after year, why music matters in the first place.