In Search of Beginning

sur Incises — written specifically for the musicians of EIC — occupies a lofty position in the Boulez canon. A prime exemplar of the composer’s labyrinthine creativity, it proliferated from a brief, occasional work: Incises for solo piano, which was written for the contestants in  the 1994 Umberto Micheli Piano Competition in Milan. Boulez defined “Incise” as “a rhythmic unit of several notes analogous to a motif.” In 1996 he expanded to Incises as a birthday gift for the music patron Paul Sacher’s 90th birthday. The labyrinth is never linear: in fact, Incises itself adapted a musical idea spelling Sacher’s name (as transcribed into the notes E-flat—A—C—B—E—D), which Boulez had introduced in Messagesquisse for his 70th birthday in 1976.

sur Incises went through various expansions and revisions into the vast, scintillating structure we hear for an ensemble of nine musicians. The composer continued to refer to it as a “work-in-progress.”

The number three plays a determinative role, beginning with three groups of three players each: three pianos, three harps, and three percussionists playing tuned instruments. Boulez initially had in mind “a kind of piano concerto” for Maurizio Pollini “although without reference to the traditional form,” he recalled. Stravinsky’s use of four percussive pianos in Les noces was among his sonic models.

A good deal of the work’s fascination lies in Boulez’s endlessly inventive combinations and juxtapositions of texture. The instrumental cast of characters dramatizes a kind of deconstruction of the piano as sound-producing object, which is then “reassembled,” as the musicologist Wolfgang Fink observes: “the harps represent the piano strings, while the resonators of the bells, vibraphone, and marimba represent its soundboard” and the steel drums evoke “a prepared piano.” Boulez also uses strategic spatial positioning of the players to highlight the shifting textures: as the music ricochets between groups, “you see what you hear.”

The percussion instruments and harps, explains the composer, “are at times completely integrated and sometimes play only a minor role.” In one section, “the pianos play an elaborate ostinato passage, thus a very strict compositional structural form while the percussionists simultaneously play very free figures. But you also find moments when this role play is divided up, such that one piano and one percussionist play the free structures while the other pianos and percussionists must follow the strict ostinato movement … Another attractive aspect is that at times you encounter very quick changes followed by sections of continuous instrumental combinations.”

Wanting to do away with “the idea of compartments in a work,” Boulez refers to the example of Proust, “where you find that the narration is continuous.” Even though Proust’s great novel is divided into chapters, “the work has to be read in one go. That is one of my main goals in music (for large works). I don’t want any breaks in the music, but you can introduce new ideas and abandon some other ideas, like the characters in a novel.”

The blank page holds terror — and endless possibility. For there is no single right beginning, but as many beginnings as can be imagined. Matthias Pintscher dramatizes the act of creation by boldly linking it with the myth of cosmogony with which the Bible begins. bereshit, the very first word of the Hebrew Torah (and of what is more widely known as the Book of Genesis), reminds us of how slippery our putatively fixed points of origin actually are.

That the first word of divine revelation should begin not with aleph but with the second letter of the alphabet is a matter of much discussion in Jewish teaching, as is the inaccuracy of the familiar translation “in the beginning” (there is no definite article in the construction bereshit). Properly, the phrase means “in a beginning.” Deeply fascinated by the bridges between spoken and musical language, Pintscher — who learned Hebrew while living in Israel during his 20s — remarks that “words [in Hebrew] are like islands, like energy sources” because so much is derived from “short root words” — such as the root rosh (“head”) in bereshit. Elsewhere, Pintscher likens the piece to “a great river.”

EIC premiered bereshit in Paris early in 2012; later that year, Pintscher introduced his two-part Chute d’Étoiles (“Falling Stars”), which similarly addresses the theme of cosmic beginnings — here, conceptualized as the Big Bang and paying homage to a sculptural installation by Anselm Kiefer.

The musical point of departure in bereshit is also a psychological one: “as if you woke up in a strange room in the pitch darkness of night, realizing your whereabouts only after a few seconds,” according to the composer. “In this state, you attempt to make out the shapes of the space. It is a beginning of a beginning from absolute darkness and shapelessness. Very cautiously and gradually, particles disentangle and then condense, fitting together in shapes.”

The initial sound, emerging from silence, is an incredibly soft, flutelike, sustained F in the highest register of a solo double bass. Pintscher likens the note F to a “horizon” that stretches across the composition. It gives way to percussive sounds “from which elements then detach and condense.” He describes the music as “highly organic,” the material “developing slowly, in quasi-chronological fashion.” Overall, bereshit “arose from the idea of liberating an entire compendium of sounds, gestures, rhythms, and orchestral combinations from a primordial state of sound.” Within Pintscher’s body of work, bereshit‘s concept of sound and space “ventures far beyond the chamber music-like dimension of ensemble forces.” 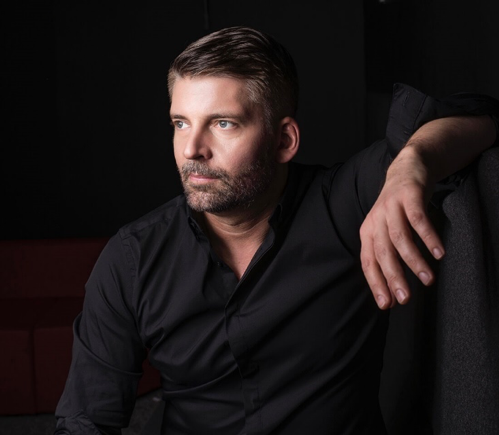