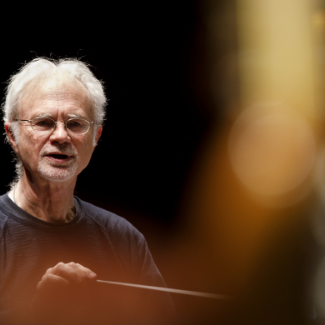 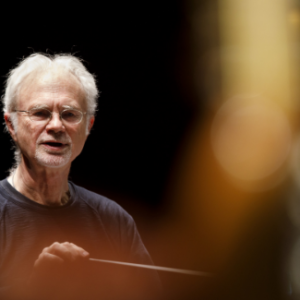 Composer, conductor, and creative thinker – John Adams occupies a unique position in the world of music. His works stand out among contemporary classical compositions for their depth of expression, brilliance of sound, and the profoundly humanist nature of their themes; his stage compositions, many in collaboration with director Peter Sellars, have transformed the genre of contemporary music theatre. Spanning more than three decades, works such as Harmonielehre, Shaker Loops, El Niño and Nixon in China are among the most performed of all contemporary classical music.

As a conductor he has led the world’s major orchestras, programming his own works with a wide variety of repertoire ranging from Beethoven, Mozart and Debussy to Ives, Carter and Ellington. Among his honorary doctorates are those from Yale, Harvard, Northwestern and Cambridge universities and from The Juilliard School. A provocative writer, he is author of the highly acclaimed autobiography Hallelujah Junction and is a frequent contributor to The New York Times Book Review. Since 2009 Adams has been Creative Chair of the Los Angeles Philharmonic.

Born and raised in New England, John learned the clarinet from his father and played in marching bands and community orchestras during his formative years. He began composing age ten and his first orchestral pieces were performed while he was still a teenager. In 2017 he celebrated his 70th birthday with festivals of his music in Europe and the US, including special retrospectives at London’s Barbican, Cité de la Musique in Paris, and in Amsterdam, New York and Geneva, among other cities. In 2019 he was the recipient of both Spain’s BBVA ​‘Frontiers of Knowledge’ award and Holland’s Erasmus Prize ​“for notable contributions to European culture, society and social science.

Conducting highlights in 2019/20 included performances with the Los Angeles Philharmonic, The Philadelphia Orchestra and the Netherlands Radio Philharmonic Orchestra. With the Orchestre Philharmonique de Radio France John made his debut in February 2020, giving the European premiere of his latest piano concerto Must the Devil Have All the Good Tunes? together with Icelandic pianist Víkingur Ólafsson.

Recent recordings include Grammy-nominated albums Doctor Atomic (featuring the BBC Symphony Orchestra and BBC Singers conducted by Adams, with Gerald Finley and Julia Bullock) and Scheherazade.2, a dramatic symphony for violin and orchestra written for Leila Josefowicz, as well as Must the Devil Have All the Good Tunes? (written for and performed by Yuja Wang, together the Los Angeles Philharmonic under Gustavo Dudamel) and the Berliner Philharmoniker’s ​‘John Adams Edition’, a box set comprising seven of his works, conducted by Rattle, Dudamel, Petrenko, Gilbert and Adams.