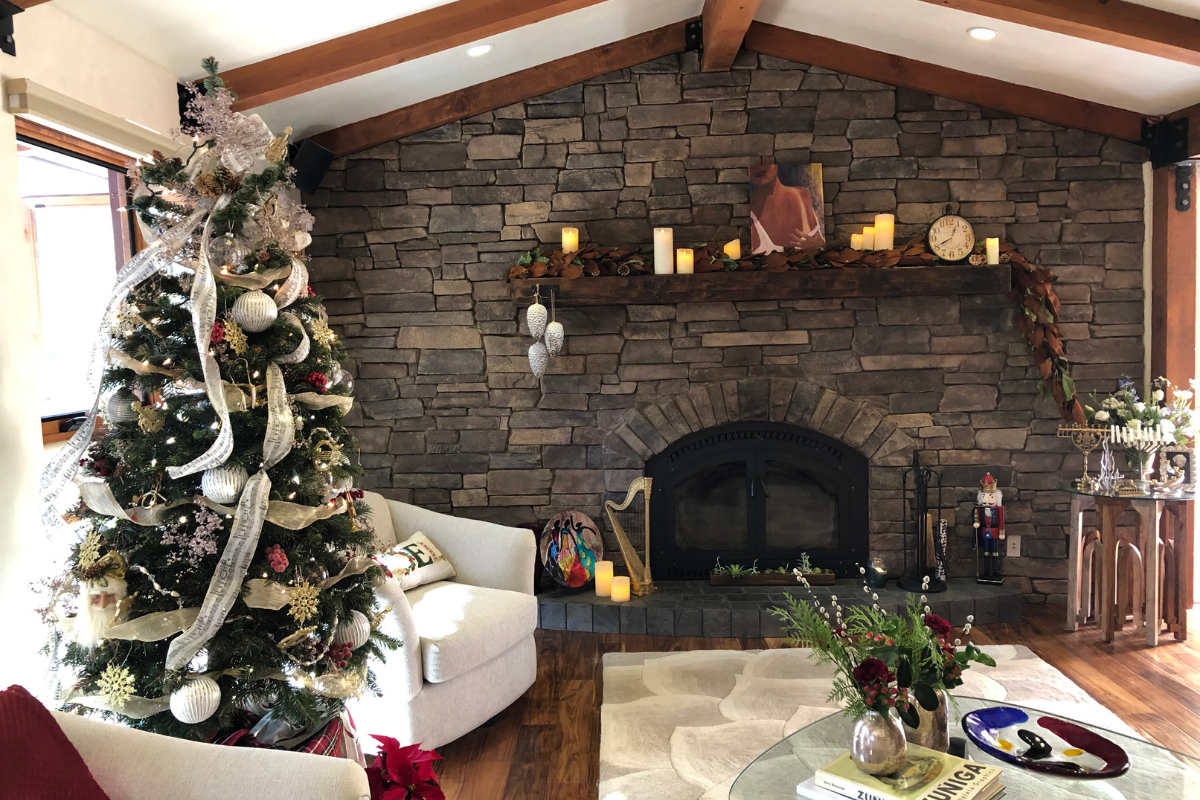 A WEEKEND OF HOLIDAY FESTIVITIES IN OJAI, CALIFORNIA

A benefit for the Ojai Music Festival and its BRAVO education and community program,
which offers free music workshops to the Ojai Valley public schools and the community

Get ready to be inspired at the 23rd Annual Ojai Holiday Home Tour & Marketplace on November 16 and 17 in the beautiful Ojai Valley. This treasured tradition, presented by the Ojai Festival Women’s Committee, invites guests to tour four distinctive Ojai Valley homes adorned with floral inspirations.

This year the selected homes are:

The Wall House: An award-winning home designed by a renowned architect for his own family, this contemporary masterpiece boasts a spacious open interior featuring a raised platform for the concert grand piano, sunken conversation area around the fireplace and a combined kitchen/dining area where the family enjoys memorable times together.  The 12-acre secluded property includes peach and apricot orchards, organic food and flower gardens, and bound by tributary streams to the Ventura River on both sides.

Tuscan Ranch: This gem of old world charm boasts gorgeous frescoes, colorful tiles, and ornate wrought iron details. Gracious outdoor living spaces add to the ambiance of this stately home, where the grounds are as lovely as the house. Everywhere you turn, there is beauty to be discovered, with touches of whimsy as well as practicality.

Foothill Farm: The current owners were fastidious about maintaining the architectural integrity of this 1906 classic when they modernized. They have a unique knack for integrating an eclectic array of art, from pre-Colombian to modern, and making it look perfectly suited amid the impeccable craftsmanship of this timeless French Normandy treasure.

El Sombrero: Reflecting the owners’ commitment to sustainability and modest sensibility, this modern-day “shack” fits in perfectly on an idyllic 1.25-acre lot in the East End and offers as much living space outdoors as indoors, incorporating countless unique features.

Musicians and Performers will also be present at each house look in. For a detailed list of musicians and performance times, click HERE.

Also taking place the same weekend is the Holiday Marketplace with its new location at the Libbey Park, across from the historic Ojai Downtown Arcade. The companion event will feature a collection of curated lifestyle and fashion items from more than 40 vendors. Admission to the Marketplace is free and open to the public.

A group discount is also available for 8 or more people. Organizers request no cameras allowed on the tour or children under 12 years of age. Comfortable shoes are highly recommended (no high-heeled shoes allowed). A free shuttle service will be available for El Sombrero.

Elizabeth Samia Cohn is new to Ojai but not new to floral design. For the past 20 years, east coast to west coast, Elizabeth has been designing florals and event venues, and homes ranging from mountain bungalows to coastal interiors. She moved from Boston to Ventura County just three years ago and fell in love with Ojai. She recently purchased the floral design shop formerly known as Digs, and has transformed it into Forage, a beautiful juxtaposition of interior design and florals.

Her work has been seen in Martha Stewart Weddings, Elle Décor, Style Me Pretty and many others. Some of her past clients have included Niche Media, Boston Red Sox, New England Patriots, and Neiman Marcus. Her design approach is to create a full experience for her clients using responsibly sourced florals and design elements, which has given her the opportunity to work in interior and exterior landscape construction, and design for luxury homes and commercial buildings.
Address: 25 Baldwin Road, Ojai, CA; Phone: (805) 646-3447; Web: forageojai.com 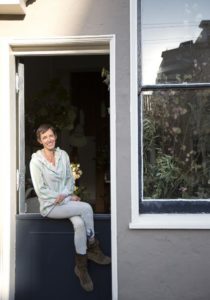 Louesa was born in the middle of Ohio in the middle of the 1960s. She grew up there and Kentucky. After studying printmaking at the Rhode Island School of Design she moved to California and began working at Chez Panisse, where she learned Californian culture and its beauty working closely with Erica Tanov. Louesa then went on to open August, a seminal fashion, art, and community hub which became an early proponent of the intersection of luxury apparel and green socially responsible textile practices. In 200, she returned to her lifelong love of foraged and gleaned floral work.

She divides her time between the Bay Area and Los Angeles, and currently lived in Ojai. She has created floral installations for Vivienne Westwood, John Baldesarri, Michael Pollan, Alice Waters, and Carolyn Murphy for Vogue and House Beautiful. Her floral work has been featured in a number of national and international magazines and media, including Vogue, C magazine, Sunset, and Martha Stewart Living. Her latest venture, Foraged Flora (Ten Speed Press/Random House) is now available for purchase.
Web: LouesaRoebuck.com 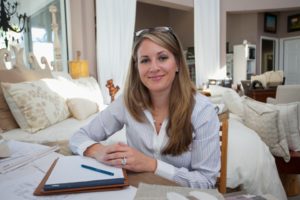 Janelle is the owner and lead designer at Janelle Interiors Design Showroom in Ojai. She specializes in construction design, color consulting, custom furniture, lighting and much more. Janelle has a successful design career furnishing homes all over the greater Los Angeles area, Santa Barbara, and Palm Springs Desert communities.

Janelle received her BA from Metropolitan State University of Minneapolis, Minnesota. Her degree concentrations were specifically in Fine Arts, Art History and Psychology. Her career began with 550 Design of Minneapolis where she trained under a senior staff of highly experienced designers. Specializing in residential and hospitality design, her experience quickly brought her to Palm Desert, California in early 2004. Her desert career began with Ambiance Unlimited where she refined her residential design skills and completed the model homes for PGA West’s Greg Norman Estates Country Club. With an interest in construction design she then joined the luxurious Andalusia Country Club design team and assisted owners in the creation of their dream homes. In 2009 she then opened Janelle Interiors as an independent design corporation and has since designed homes in some of the desert’s premier clubs.

Relocating to Ojai in 2012 she opened up her design showroom where clients can view the extensive home furnishing resources. Janelle’s design approach is, “Simple but Elegant,” with attention to the planning of space and style. She prides herself in creating a look and feel that coincides with her clients
dream or vision in any project.
Showroom: (805) 640-0194; Web: JanelleInteriors.com 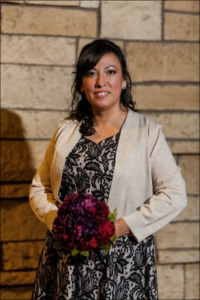 Angela’s Flowers was originally started by Angela Mc Elroy in Ventura. She decided to move to beautiful Ojai Valley, where she continued to live until recently. Angela then sold the business to Joanne Moore approximately in 1989, who owned it until about 2006, until she decided to sell it to friend Laurie Barnett who then sold it to Irma. Irma began working for Angela’s Flowers when she was just a sophomore at the local high school. It was her first job and honestly believes it will be her last. She loves what she does so much it doesn’t seem like work, and has been with the business for over 20 years.
Address: 226 W Ojai Ave #102, Ojai; Phone: (805) 646-5404; Web: AngelasFlowersOjai.com

Posted on November 1, 2017 by Gina Gutierrez

We look forward to seeing you at the Holiday Home Look In on November 10-11, 2018, a benefit for the Ojai Music Festival and its BRAVO music education and community programs. Here are several reminders to make your day more enjoyable!

**Tickets are still available this weekend. You may purchase tickets at our will call box office located at the St. Thomas Aquinas Church Center at 185 St. Thomas Drive, Ojai**

Due to possible Highway 101 closures, we are suggesting to patrons who are coming from south an alternate route to Ojai if parts of Highway 101 and Highway 1 will continue to be closed over the weekend.

From Los Angeles, Orange and San Diego Counties, take I-5 N to CA-126 West bound to CA-150 West bound (10th Street exit) in Santa Paula. Follow CA-150 West that will lead you into Ojai. Although this is a fast route, and even faster than taking HWY 101, we suggest giving yourself additional time for travel over the weekend.

Due to Spectrum internet issues, if you have additional questions, please call Anna Wagner at 805 794-0424.
For current updates on road closures visit: vcemergency.com

If you have additional questions, please contact us at 805 646 2053 or email info@ojaifestival.org. For up-to-date information on the day of the event, please call 805 646 2094 and listen to the recorded message.

Enter to win prizes from Holiday Marketplace vendors and the grand prize an Ojai Spa Weekend Getaway! Tickets are $20 for 3 and can be ordered online or by calling 805 646 2053. Click here to order raffle tickets online or call 805 646 2053 to purchase over the phone. Proceeds benefit the Ojai Music Festival and its BRAVO music education programs in the schools and community.

This raffle is registered with the CA Dept. of Justice under registration RF1651.