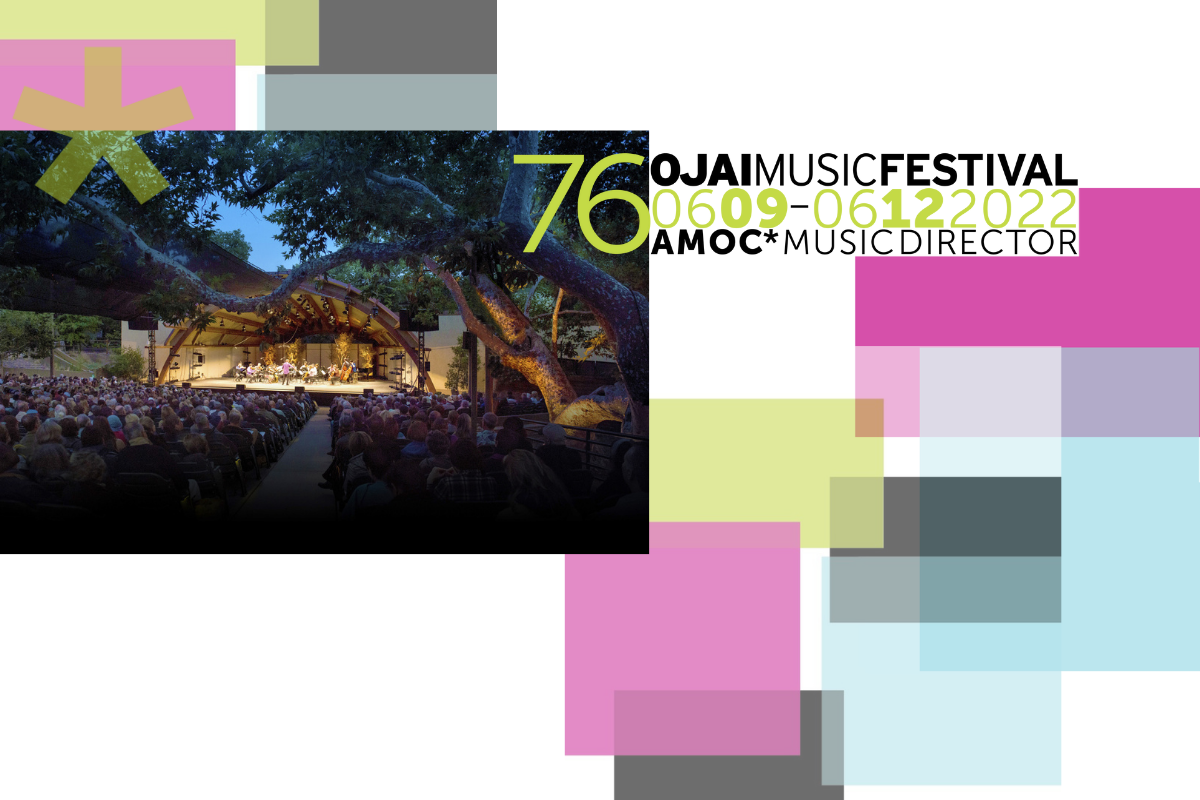 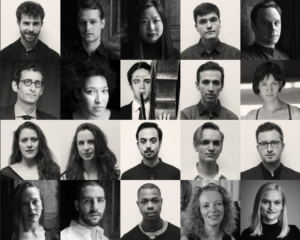 Additional concert performances will include EASTMAN, a multi-dimensional performance piece, reflecting on Julius Eastman’s art and the larger context of his life, creativity, and humanity. Other programs will range from works of Vivaldi and Bach to Cassandra Miller, Reiko Fueting, and Hans Otte in a special performance of The Book of Sounds. Musical guest artists will include the early-music ensemble Ruckus, cellist Seth Parker Woods, composer/pianist Anthony Cheung, clarinetist Gleb Kanasevich, violist Carrie Frey, and percussionist Mari Yoshinaga

“We are thrilled for audiences to meet AMOC and our formidable guest collaborators as creators and performers. This Festival, with its numerous world premieres, including six new theatrical productions, is a loving portrait of this moment in time, full of work that is based on our artists’ own experiences. As we climb out of this pandemic and meet each other in a moment when many of us still feel a lingering fear of contact with others, we believe it’s more important now than ever to find intimacy again, to gather together through rituals of performance. And we can’t imagine a more transcendent place to do that than at Ojai.” — Zack Winokur, Artistic Director of AMOC, 2022 Music Director

Ojai Festival’s Artistic and Executive Director Ara Guzelimian commented, “As we mark the 75th anniversary of the Festival’s founding in 1947, we celebrate the spirit of Ojai which has always led the way to new and unexpected horizons, a spirit embodied in the work of AMOC. This brilliant assembly is representative of a new generation of artists – in their fearless melding of disciplines, in their spirit of collaboration as a central artistic premise, and their collective commitment to creation as well as performance. Together, they have produced some of the most exciting work to emerge in recent years. Their music directorship at Ojai is the first curatorial project that involves every single member of AMOC, and it has been an exhilarating process to devise these programs together. I happily anticipate a Festival full of joyous discovery and adventure.”

WORLD PREMIERES
Programming for the 2022 Festival will include a premiere performance of AMOC’s staging of Olivier Messiaen’s deeply affecting song cycle Harawi for soprano and piano. In addition to Julia Bullock and Conor Hanick’s performance of this sweeping work, this semi-staged production breaks open Messiaen’s musical explorations of love and death into a newly physicalized and theatrical dimension through the choreographic work of Bobbi Jene Smith and Or Schraiber, directed by Zack Winokur. Harawi, written in 1945, is based on an Andean love song genre of the same name, with texts by Messiaen and incorporating the Quechua language.

The world premiere of Family Dinner, commissioned by the Ojai Festival, anchors the Saturday evening slot of the 2022 Festival. Family Dinner is a cycle of mini-concertos by Matthew Aucoin, each movement of which spotlights a different member of AMOC. The piece will also feature spoken “toasts” delivered both by AMOC artists and special guests.

The Festival will present the premiere of LA-based composer Carolyn Chen’s How to Fall Apart, a newly-AMOC-commissioned one-hour work integrating text, gesture, and music. This will be a first-time collaboration between Chen and AMOC, and will feature AMOC members Jay Campbell, Julia Eichten, Keir GoGwilt, and guest collaborators Yiannis Logothetis and Matilda Sakamoto.

A new full-length collaborative dance work created especially for the Ojai Festival by AMOC member and choreographer Bobbi Jene Smith, Open Rehearsal, evolves and adapts parts of Smith’s most recent film, Broken Theater, which was developed and shot at Mass MoCA and La MaMa. The piece explores themes of power, love, and trust through the theatrics of rehearsal and will feature music by Schubert, Bach, Connie Converse, and Pete Seeger.

The Cello Player, another new collaborative piece, will receive its first performance at Ojai. Created by Or Schraiber, Yiannis Logothetis, Coleman Itzkoff, and Bobbi Jene Smith, The Cello Player is a dance-music piece excavating the complexity of ancient relationships: the tortured conception of friendship as a messy amalgam of love, hatred, insecurity, and neediness.

Rounding out the world premieres in Ojai will be an Ojai Festival-commissioned song cycle, the echoing of tenses, by Anthony Cheung. The piece sets poems by Asian-American writers interconnected by the larger theme of memory, made complicated by the circumstances and tensions of cultural and personal identity, family, migration, loss, and reflection. The various poems by Arthur Sze, Monica Youn, Jenny Xie, Ocean Vuong, and others will be sung, spoken, and interwoven throughout. The work features Paul Appleby, Miranda Cuckson, and Cheung himself as pianist.

Bookending the four-day event on Sunday evening, AMOC will bring the 2022 Festival to a close with a joyful, high-spirited program that brings together every one of the Festival’s artists, in every discipline, for a grand finale and communal catharsis. The program will feature a broad array of Baroque music featuring countertenor Anthony Roth Costanzo and Ruckus, and the Festival will conclude with the entire company performing Julius Eastman’s jubilant, mesmerizing Stay On It.

Additional musical highlights of the four-day Festival will include EASTMAN, a multi-dimensional performance piece, reflecting the performers’ consideration of Julius Eastman’s art and the larger context of his life, creativity, and humanity; a rare performance of the complete epic solo piano work The Book of Sounds by pioneering German composer and pianist Hans Otte played by Conor Hanick; and a program titled About Bach, which pairs works of Bach with contemporary reflections on his music by Cassandra Miller and Reiko Fueting.

The Festival offers its first performance of a work by one of Southern California’s most vital and distinctive musical voices, Andrew McIntosh. McIntosh’s Little Jimmy was inspired by a visit the composer made to a backpackers’ camp called Little Jimmy, located on Mt. Islip in the Angeles National Forest.  Little Jimmy, performed by pianists Conor Hanick and Matthew Aucoin and percussionists Jonny Allen and Mari Yoshinaga, is programmed alongside Messiaen’s Harawi.

COMMUNITY OFFERINGS
During the four days of the Festival, free community activities will occur in Libbey Park and throughout Ojai, as well as ongoing integration of the Festival’s year-round BRAVO music education program in the public schools.

AMOC, 2022 MUSIC DIRECTOR
Founded in 2017 by Matthew Aucoin and Zack Winokur, the mission of AMOC (American Modern Opera Company) is to build and share a body of collaborative work. As a group of dancers, singers, musicians, writers, directors, composers, choreographers, and producers united by a core set of values, AMOC artists pool their resources to create new pathways that connect creators and audiences in surprising and visceral ways. AMOC recently received a $750,000 grant from The Andrew W. Mellon Foundation “to support visionary artists in collaborative processes that re-envision a long-enduring art form in an artist-centric and contemporary manner.”

ARA GUZELIMIAN, ARTISTIC AND EXECUTIVE DIRECTOR
Ara Guzelimian is Artistic and Executive Director of the Ojai Music Festival, having begun in that position in July 2020. The appointment culminates many years of association with the Festival, including tenures as director of the Ojai Talks and as Artistic Director 1992–97. Guzelimian stepped down as provost and dean of the Juilliard School in New York City in June 2020, having served in that position since 2007. At Juilliard, he worked closely with the president in overseeing the faculty, curriculum, and artistic planning of the distinguished performing arts conservatory in all three of its divisions: dance, drama, and music. He continues at Juilliard as Special Advisor, Office of the President.

Previously, Guzelimian held the position of artistic administrator of the Aspen Music Festival and School in Colorado, and he was long associated with the Los Angeles Philharmonic at the beginning of his career, first as producer for the orchestra’s national radio broadcasts and, subsequently, as Artistic Administrator. Mr. Guzelimian is editor of Parallels and Paradoxes: Explorations in Music and Society (Pantheon Books, 2002), a collection of dialogues between Daniel Barenboim and Edward Said. In September 2003, Guzelimian was awarded the title Chevalier des Arts et des Lettres by the French government for his contributions to French music and culture.

OJAI MUSIC FESTIVAL
The Ojai Music Festival represents an ideal of adventurous, open-minded and open-hearted programming in the most beautiful and welcoming of settings, with audiences and artists to match its aspirations. As its 75th anniversary approaches, the Festival remains a haven for thought-provoking musical experiences, bringing together innovative artists and curious audiences in an intimate, idyllic outdoor setting. Each Festival’s narrative is guided by a different Music Director, whose distinctive perspectives shape programming — ensuring energized festivals year after year.

Throughout each year, the Ojai Music Festival contributes to Southern California’s cultural landscape with in-person and online Festival-related programming as well as robust educational offerings that serve thousands of public-school students and seniors. The organization’s apex is the world-renowned four-day Festival, which takes place in Ojai, a breathtaking valley 75 miles from Los Angeles, which is a perennial platform for the fresh and unexpected. During the immersive experience, a mingling of the most curious take part in concerts, symposia, free community events, and social gatherings. During the intimate Festival weekend, considered a highlight of the international music summer season, Ojai welcomes up to 7,000 patrons and reaches 35 times more audiences worldwide through live and on-demand streaming of concerts and discussions.

COVID-19 HEALTH AND SAFETY PLANNING
The Ojai Music Festival is committed to the health and safety of the Festival and greater Ojai communities. Given changing conditions, we continue to consult with county and state public health officials to determine the best practices (which may include masking and vaccination requirements) to put into effect for the June Festival. We will communicate our policy and any required protocols as we approach the June Festival. Please check our website for updated health and safety information to plan your visit.

SINGLE TICKET FOR 2022 OJAI MUSIC FESTIVAL
2022 Ojai Festival single tickets are on sale and range from $50 to $150 in the reserved section of Libbey Bowl. Lawn tickets available at $20. Tickets may be purchased online at OjaiFestival.org or by calling (805) 646-2053.