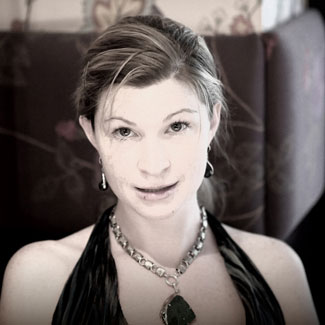 Christine Southworth (b. 1978) is a composer and video artist based in Lexington, Massachusetts, dedicated to creating art born from a cross-pollination of sonic and visual ideas. Inspired by intersections of technology and art, nature and machines, and musics from cultures around the world, her music employs sounds from man and nature, from Van de Graaff Generators to honeybees, Balinese gamelan to seismic data from volcanoes.

Southworth received a B.S. from MIT in 2002 in mathematics and an M.A. in Computer Music & Multimedia Composition from Brown University in 2006. In 2003 she co-founded Ensemble Robot, a collaborative of artists and engineers that design and build musical robots. She is the general manager of the MIT-based Gamelan Galak Tika, and has composed several pieces for the group and performed at venues including Lincoln Center, Carnegie Hall, EMPAC, the Cleveland Museum of Art, several Bang on a Can Marathons, and the Bali International Arts Festival. In 2010, she helped design Gamelan Elektrika for her piece Supercollider, which was premiered at Lincoln Center Out of Doors Festival with the Kronos Quartet. In addition to gamelan, she studies bagpipe, playing both the Galician Gaita and the Great Highland Bagpipe.

Southworth’s compositions have been performed throughout the U.S., Europe, and Indonesia by ensembles including Kronos Quartet, Gamelan Galak Tika, Calder Quartet, Bang on a Can All-Stars, Gamelan Semara Ratih, California EAR Unit, Andrew W.K., and Ensemble Robot. She has received awards from the American Music Center, UCross Foundation, LEF Foundation, American Composers Forum, Meet the Composer, New England Foundation for the Arts (NEFA), the MIT Eloranta Fellowship, and Bang on a Can and has been a fellow at UCross Foundation and The Hermitage Artist Retreat.

She has four recordings available on Airplane Ears Music: ‘Zap!’ (2008) and ‘Gamelan Galak Tika: Bronze Age Space Age (2009)’, Christine Southworth String Quartets (2013), performed by The Calder Quartet, Kronos Quartet, Gamelan Galak Tika, and Face the Music, with support from the American Music Center CAP Recording Grant, and ‘In My Mind and In My Car’ (2013), for Evan Ziporyn on bass clarinet, electronics and video.