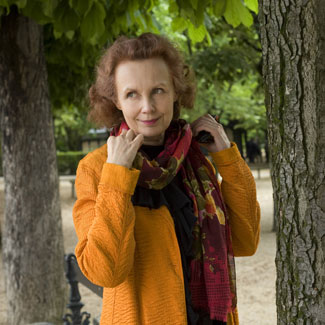 Kaija Saariaho is a prominent member of a group of Finnish composers and performers who are now, in mid-career, making a worldwide impact. Born in Helsinki in 1952, she studied at the Sibelius Academy there with the pioneering modernist Paavo Heininen and, with Magnus Lindberg and others, she founded the progressive ‘Ears Open’ group. She continued her studies in Freiburg with Brian Ferneyhough and Klaus Huber, at the Darmstadt summer courses, and, from 1982, at the IRCAM research institute in Paris – the city which has been most of the time her home ever since.

At IRCAM, Saariaho developed techniques of computer-assisted composition and acquired fluency in working on tape and with live electronics. This experience influenced her approach to writing for orchestra, with its emphasis on the shaping of dense masses of sound in slow transformations. Significantly, her first orchestral piece, Verblendungen (1984), involves a gradual exchange of roles and character between orchestra and tape. And even the titles of her next, linked, pair of orchestral works, Du Cristal (1989) and …à la Fumée (1990) – the latter with solo alto flute and cello, and both with live electronics – suggest their preoccupation with colour and texture.

Before coming to work at IRCAM, Saariaho learned to know the French ‘spectralist’ composers, whose techniques are based on computer analysis of the sound-spectrum. This analytical approach inspired her to develop her own method for creating harmonic structures, as well as the detailed notation using harmonics, microtonaly and detailed continuum of sound extending from pure tone to unpitched noise – all features found in one of her most frequently performed works, Graal théâtre for violin and orchestra or ensemble (1994/97).

Later Saariaho has turned to opera, with outstanding success. L’Amour de loin, with a libretto by Amin Maalouf based on an early biography of the twelfth-century troubadour Jaufré Rudel, received widespread acclaim in its premiere production directed by Peter Sellars at the 2000 Salzburg Festival, and won the composer a prestigious Grawemeyer Award. Adriana Mater, on an original libretto by Maalouf, mixing gritty present-day reality and dreams, followed, again directed by Sellars, at the Opéra Bastille in Paris in March 2006. Emilie, an opera and monodrama for Karita Mattila had its premiere in Lyon in March 2010.

Around the operas there have been other vocal works, notably the ravishing Château de l’âme (1996), Oltra mar (1999), and the song-cycle Quatre instants (2002). And the evening-long La Passion de Simone, portraying the life and death of the philosopher Simone Weil, formed part of Sellars’s international festival ‘New Crowned Hope’ in 2006/07.

The experience of writing for voices has led to some clarification of Saariaho’s language, with a new vein of modally oriented melody accompanied by more regular repeating patterns. This change of direction has been carried over into orchestral works including Aile du songe for flute and chamber orchestra (2001) and the stunning Orion for large orchestra (2002) , Notes on Light (2006) for cellist Anssi Karttunen and the Boston Symphony Orchestra and the Bergman-inspired Laterna Magica (2008) for Sir Simon Rattle and the Berlin Philharmonic Orchestra. Most recently D’OM LE VRAI SENS, was written for the clarinettist Kari Kriikku.

In the profusion of large and small works which Saariaho has produced in recent years, two features which have marked her whole career continue to stand out. One is a close and productive association with individual artists – not least Amin Maalouf and Peter Sellars, as well as the conductor Esa-Pekka Salonen, flautist Camilla Hoitenga, cellist Anssi Karttunen, soprano Dawn Upshaw, and pianists Emmanuel Ax and Tuija Hakkila. The other is a concern, shown equally in her choice of subject matter and texts and in the profusion of expression marks in her scores, to make her music not a working-out of abstract processes but an urgent communication from composer to listener of ideas, images and emotions.

Saariaho has claimed major composing awards in The Grawemeyer Award, The Wihuri Prize, and The Nemmers Prize, and in 2011 was awarded The Sonning Prize. In May 2013, Saariaho was awarded the Polar Music Prize. In 2015 she will be the judge of the Toru Takemitsu Composition Award.

In 2013, the chamber version of Saariaho’s oratorio La Passion de Simone was presented at Melos Ethos Festival, Bratislava. In May 2014, Maan varjot for organ and orchestra was premiered by Olivier Latry and the Montreal Symphony Orchestra, conducted by Kent Nagano. The piece was performed later that year with the Orchestre de Lyon and the Philharmonia in London, conducted Esa-Pekka Salonen.

The music of Kaija Saariaho is published exclusively by Chester Music and Edition Wilhelm Hansen, part of the Music Sales Group of Companies.