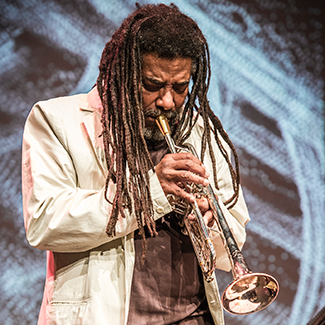 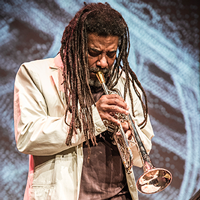 A trumpeter and multi-instrumentalist, composer, and improviser, Ishmael Wadada Leo Smith has been active in creative contemporary music for over forty years. His systemic music language Ankhrasmation is significant in his development as an artist and educator.

Born in Leland, Mississippi, Smith’s early musical life began in the high school concert and marching bands. At the age of thirteen, he became involved with the Delta Blues and Improvisation music traditions. He received his formal musical education with his stepfather Alex Wallace, the U.S. Military band program (1963), Sherwood School of Music (1967-69), and Wesleyan University (1975-76). Mr. Smith has studied a variety of music cultures: African, Japanese, Indonesian, European and American.

He has taught at the University of New Haven (1975-’76), the Creative Music Studio in Woodstock, NY (1975-’78), and Bard College (1987-’93). He is currently a faculty member at The Herb Alpert School of Music at California Institute of the Arts. He is the director of the African-American Improvisational Music program, and is a member of ASCAP, Chamber Music America, and the Association for the Advancement of Creative Musicians.

Mr. Smith’s music philosophy Notes (8 Pieces) Source a New. World Music: Creative Music has been published by Kiom Press (1973), translated and published in Japan by Zen-On Music Company Ltd. (1976). In 1981 Notes was translated into Italian and published by Nistri-Litschi Editori.

He was invited to a conference of artists, scientists and philosophers “Third Culture Copenhagen” in Denmark 1996, and presented a paper on his Ankhrasmation music theory and notational system for creative musicians. His interview was recorded for Denmark T.V., broadcasted September 1996.

Smith’s music for multi-ensembles has been performed since 1969. Tabligh for double-ensemble was performed by Golden Quartet and Classical Persian ensemble at Merkin Concert Hall (2006) and by Golden Quartet and Suleyman Erguner’s Classical Turkish ensemble at Akbank Music Festival in Istanbul (2007). His largest work Odwira for 12 multi-ensembles (52 instrumentalists) was performed at California Institute of the Arts (March 1995). His Noh piece “Heart Reflections” was performed in Merkin Concert Hall, NY (November 1996).