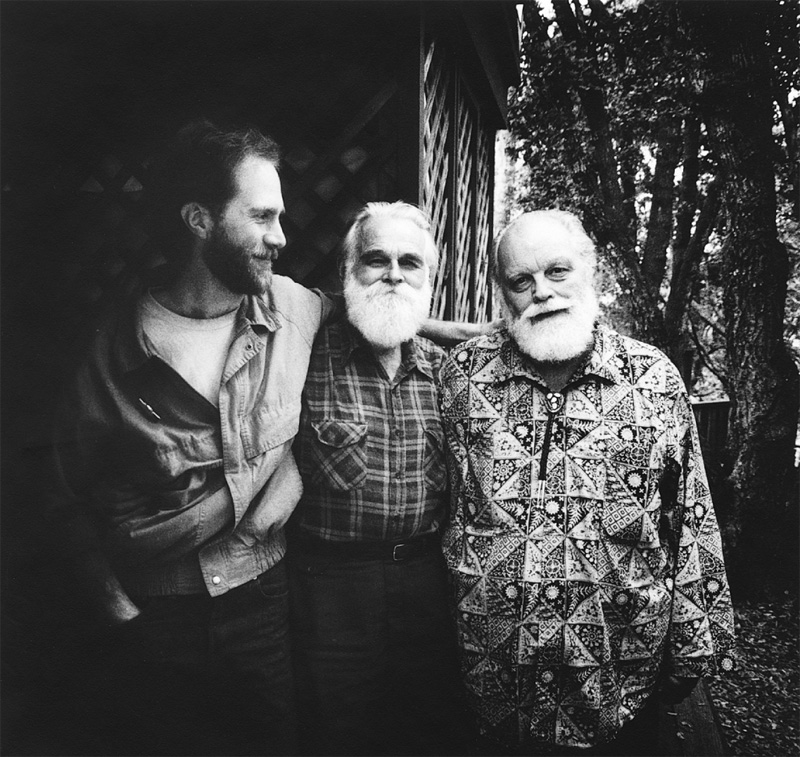 The great redwood has fallen.
Light streams into the forest.
The sound will reverberate
for generations to come.

The passing of Lou Harrison marks the end of an era in American music that began with Charles Ives and continued on through Henry Cowell, Ruth Crawford Seeger, Harry Partch, Conlon Nancarrow, and John Cage.

The expressive range, diversity of media, prolific quantity, and consistent quality of Lou’s music are perhaps unequalled among recent composers. From heroically dissonant orchestral counterpoint to explosive percussive rhythms to ravishing, timeless music for gamelan, his body of work embraces most of the important currents in the music of our time.

Lou always fearlessly pursued his own way. While still a young man, he left the competitive careerism of New York City to make his home on the California coast. There, surrounded by the beauties of nature and the richness of Pacific cultures, he created his own uniquely personal world, grounded in his credo: “Cherish. Conserve. Consider. Create.”

As a teacher Lou introduced many young Western musicians to the music of other cultures, or as he called it, “the whole, wide, wonderful world of music.” His diminutive Music Primer remains a wellspring of creative wisdom about the life and the craft of a composer.

Through his wide-ranging friendships, Lou was a central figure, connecting five generations of musical independents. His spirit lives on in his music and through the gifts he gave to so many younger musicians. I feel blessed to have been among them.

Thirty years ago, as an aspiring young composer, I won second place in a composition contest. I was especially thrilled since one of the judges was Lou Harrison, whose music I very much admired. Emboldened, I made the pilgrimage to San Jose State University, where Lou was teaching at the time. I was delighted to find the man himself to be every bit as scintillating and engaging as his music.

From that day on, Lou was a generous mentor, an attentive friend, and an inspiring model to me, as he has been for many other younger composers. Lou always treated me with respect as a younger colleague. His matter-of-fact embrace of my aspirations removed any shred of doubt in my mind that I would make a life as a composer.

When I first visited Lou and his partner Bill Colvig at their home in Aptos, they picked me up at the bus station in Santa Cruz. Bill was driving and Lou insisted that I ride in the front seat. He wouldn’t take no for an answer. From then on, whenever we drove anywhere together this was the seating arrangement. Lou always treated me like visiting royalty.

In my mid-thirties I found myself weighing the risk of quitting my day job to devote myself to composing full-time. My boss offered me the opportunity to continue working half-time. As I often did, I called Lou for his perspective.

As usual, Lou spoke directly to the situation: “There are no half-time jobs, John. Only half-time salaries.”

I promptly quit my job and never looked back.

Over the years Lou taught me many lessons about the art of composition and the life of a composer. He also gave me the best conducting lesson I ever had.

In 1988 Lou and Bill came to Alaska for a concert of Lou’s music with the Fairbanks Symphony. On the program was his Suite for Violin, Piano and Small Orchestra, which I conducted. As a percussionist I’d always had steady time. And as an occasional conductor I’d always prided myself on my precision and attention to detail.

After the dress rehearsal I asked Lou what he thought.

“You remind me of John Cage,” he said.

Intrigued and vaguely flattered, I asked: “How so?”

“When John used to conduct he wanted to hear every detail of the music and he tried to show every nuance of the score. So, of course, the tempo would gradually slow down.”

Instantly I recognized that I was doing the very same thing. At the next night’s concert my conducting was leaner, crisper, and steadier in tempo—a style I’ve tried to maintain ever since.

This lesson from Lou was not just about conducting. It was also a lesson about teaching. Lou was fond of recalling that his teacher Henry Cowell would often begin a sentence by saying “As you know . . .” and then impart some wonderfully unexpected pearl of wisdom. In his own teaching Lou employed this technique brilliantly, using the gentle touch of flattery to prepare receptive minds for the gifts of learning.

For their concert Lou and Bill brought with them the Sundanese gamelan degung, Sekar Kembar. As far as we can tell, this was the first time a gamelan had been heard “live” in Alaska. Bill played various instruments in the ensemble and he was featured as a soloist playing the suling flute in Lou’s tunefully sunny Main Bersama-sama for horn, suling, and gamelan.

This was Lou’s one and only visit to Alaska. But it was a homecoming for Bill. In the late 1930s Bill had left Berkeley to live for several years on the rough and ready frontier of Alaska and the Yukon, and he was thrilled to be back in the North again.

After the concert Lou and Bill came out to my cabin for a party. My place was deep in the woods. I had no running water and heated with a wood stove. The temperature in the boreal forest that night was well into the forty-somethings below zero. Accustomed to warmer climes, Lou was good-humored in his forbearance. But Bill was in his element. The colder it got the better he liked it. The aurora borealis dancing in the sky that night was the icing on his cake.

In 1991 I composed Five Yup’ik Dances, based on traditional songs of the First People of the Yukon-Kuskokwim delta. These pieces are composed entirely of “white notes,” with no sharps or flats. After looking through the score Lou was very enthusiastic, saying: “You’ve rediscovered those seven tones as something wild, fresh and new.” Encouraged by Lou’s reaction, I went to compose Dream in White on White—a larger work in Pythagorean diatonic tuning which led eventually to the seventy-five-minute expanse of In the White Silence.

Sometime in my mid forties, I began to feel acutely the professional limitations of my life in Alaska. While colleagues elsewhere had blossoming careers, things seemed to be moving very slowly for me. I thought seriously about moving someplace closer to the centers of musical life. I decided to apply for a fellowship and asked Lou if he would write a letter of recommendation for me. Although he was very busy, he cheerfully agreed.

When I received the letter first thing I noticed was the signature, in Lou’s incomparable calligraphy. (This was before the development of the lovely “Lou” computer font.) But beyond the elegance of his hand, I was touched by the heart of his message. Among other things Lou observed that by choosing to live in Alaska I had chosen to develop a deep relationship with place and to avoid what he called “the group chattering of the metropolis.”

This, he said, had allowed the growth of my work to be “both integrated and in ‘real time.’”

Clearly Lou understood the meaning of my life choices better than I did!

I didn’t receive the fellowship. But that letter from Lou was an enduring gift. I haven’t thought about leaving the North since.

One summer when an orchestral work of mine was performed at the Cabrillo Music Festival, I spent a memorable week with Lou and Bill. After the concert that included my music we had dinner. My piece had been well performed and well received, and I was in an upbeat mood. At the time Lou was enjoying a surge in performances of his orchestral music, and I suggested that this must be gratifying to him.

I asked him to elaborate.

“The orchestra is a glorious noise. But the heart and soul of our music lies elsewhere. We’re the ones who form our own ensembles, make our own tunings, build our own instruments and create our own musical worlds. We’re the ‘Do It Yourself’ school of American music!”

I was humbled. Here Lou was finally starting to receive from the classical musical establishment some measure of the recognition he deserved, yet he wasn’t seduced at all. He always had a singular dedication to the deepest roots of his music and an unwavering sense of who he was.

At a time when gay couples were still largely invisible to the straight world, Lou and Bill openly and tenderly showed their profound love for one another. Their thirty-three years of shared life and devotion are a model and an inspiration for all couples.

As their flowing beards and hair turned white, Lou and Bill grew to resemble one another more and more. When Bill died in 2000, Lou was at his side, holding his hand. “It was a peaceful death,” said his soul mate. “He was so beautiful . . . like a beautiful animal returning to Nature.”

Like many of their friends, I worried that Lou would soon follow Bill. But he continued his life and work with undiminished energy and enthusiasm well into his eighty-sixth year. When he died, he was on his way to a festival of his music.

As Lou once quipped: “All good things come to an end. Even the twentieth century!”

Yet Lou Harrison and his joyful, ecumenical life and music seem more vital and pertinent than ever before.