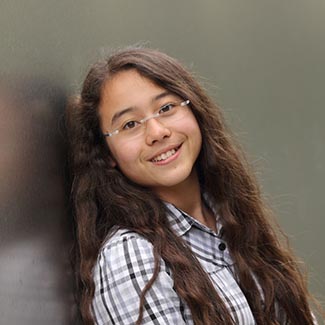 Sharon Hurvitz (17) has been a Composer Fellow of the LA Philharmonic since 2013. She recently won First Prize in the High School Division of the 2015 Robert Avalon International Competition for Composers, is a Music Composition Honorable Mention Winner (2016) and Merit Winner (2015) of two National YoungArts Foundation Competitions, was a 2014 Finalist in the ASCAP Foundation Morton Gould Young Composer Awards, and a 2015 Finalist in the National Young Composers Challenge. She also was First Place winner two years in a row at the Music Teacher’s Association of California Composers Today State Contest and has been granted its highest accolade for high school and college-age composers, a five-year (2015-2020) honorary membership in The Young Composers Guild. She also was recently commissioned by the Olympia Philharmonic Society for performance by its Youth Orchestra in June 2016. Sharon is a graduate of Yamaha’s International Junior Original Concert Program, where starting at age ten, she performed her own compositions in four U.S. National Yamaha Junior Original Concerts and two National Association of Music Merchants Conventions, including NAMM’s 2012 opening Breakfast of Champions, while studying composition with Yamaha Music Academy Director, Carlton Liu. Now taking piano repertoire lessons with Mark Richman, she has performed in four Celebration of Young Talent Concerts (2 Concerto, 2 Chamber), and numerous other recitals for solo, chamber and piano 4-hands. Sharon also studied violin for 8 years with Chyi-Yau Lee of the Long Beach Symphony Orchestra, and took four years of cello at public schools in San Gabriel, California, where she became Principal Cellist with the Advanced Orchestra and recipient of a 2012 U.S. National School Orchestra Award. She then enrolled in the Classical Piano Department of the Los Angeles County High School for the Arts, where she has won its 2014 and 2015 Awards for Outstanding Achievement in Music – Piano, and is also a 2015 College Board AP Scholar with Honor. Sharon is fluent in Mandarin Chinese, having studied at the Chinese School of San Marino for 8 years.