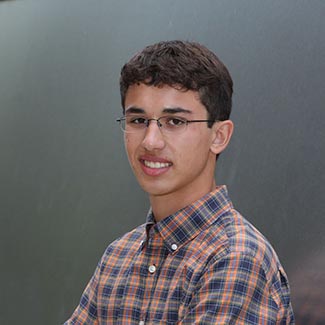 Robby Good (15) is a sophomore at Hart High School in Santa Clarita. Robby started his musical journey at age 6 with piano lessons, and is currently studying piano with Richard Parizer. He started playing percussion at age 9 and is currently studying under Matt Cook. At 12 years of age, Robby started taking composition, percussion, and ensemble classes at California Institute of the Arts through the Saturday CAP Program. Robby’s first original percussion composition made its debut at the Cal Arts Spring Concert in 2014. In May of 2014, Robby was recognized by Assemblyman Scott Wilk for his dedication to Music Composition. In 2016, he received an honorable mention in the ACF NextNotes High School Composition Awards. While at Hart High, Robby has had the privilege to be a part of the Hart High marching and jazz bands as well as the acclaimed Wind Ensemble under the musical direction of Anthony Bailey. Robby was selected as a percussionist to the 2015 SCSBOA All-Southern High School Honor Symphonic Band. He received a Superior Rating on marimba from the SCSBOA Solo Ensemble. He was also selected to perform in the William S. Hart High School All District Honor Band as a percussionist and pianist under the direction of Professor Sharon Lavery from USC. Robby is a member of the California Scholarship Federation and the National Jr. Honor Society. He currently studies music composition with Professor Ian Krouse of UCLA.