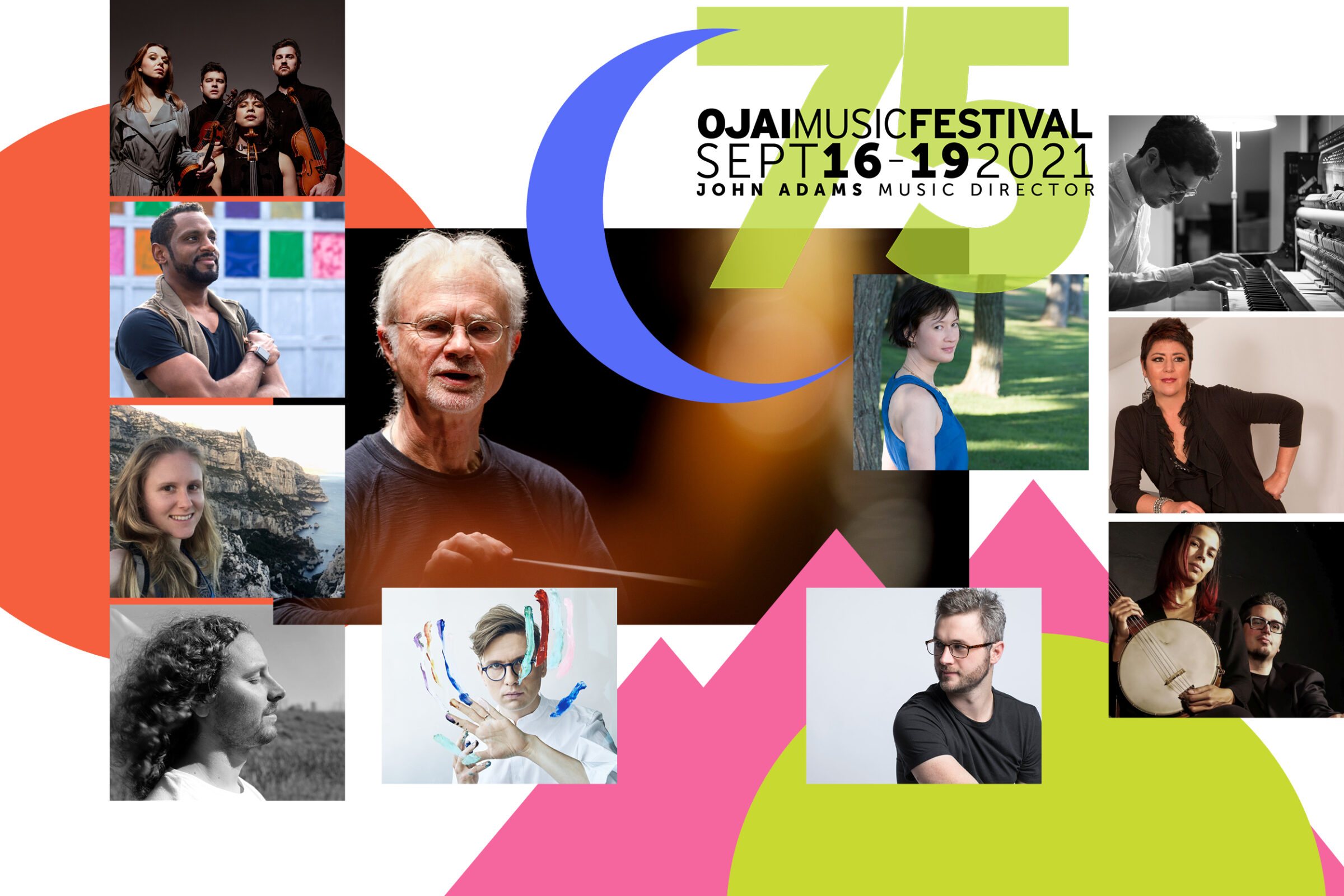 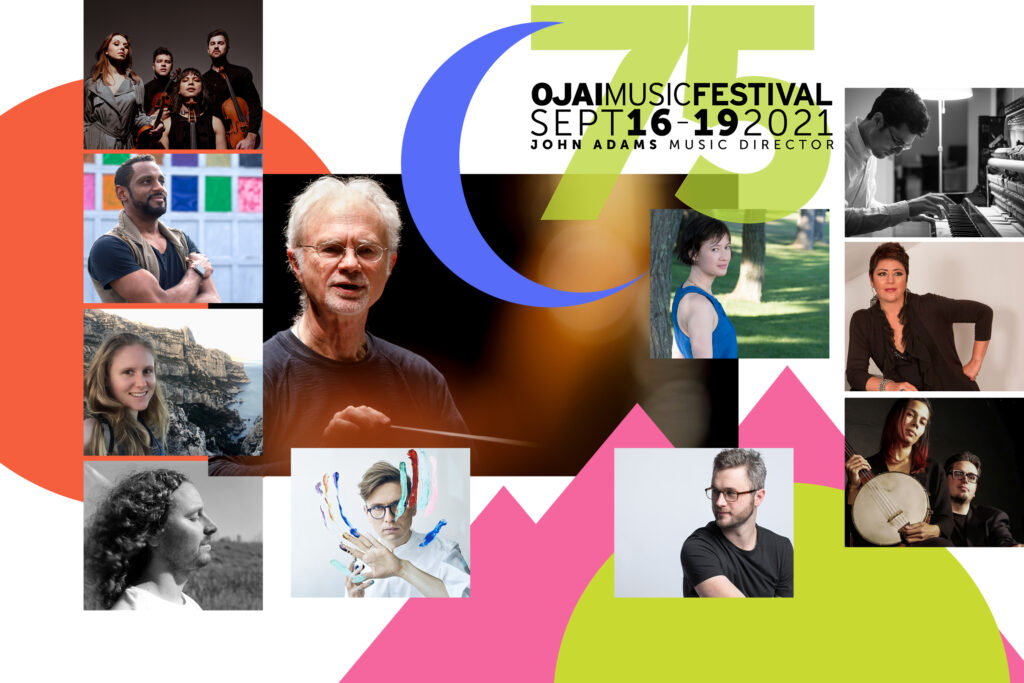 John Adams, 2021 Music Director
Composer, conductor, and creative thinker – John Adams occupies a unique position in the world of music. His works stand out among contemporary classical compositions for their depth of expression, brilliance of sound, and the profoundly humanist nature of their themes; his stage compositions, many in collaboration with director Peter Sellars, have transformed the genre of contemporary music theatre. Spanning more than three decades, works such as Harmonielehre, Shaker Loops, El Niño and Nixon in China are among the most performed of all contemporary classical music.

As a conductor he has led the world’s major orchestras, programming his own works with a wide variety of repertoire ranging from Beethoven, Mozart and Debussy to Ives, Carter and Ellington. Among his honorary doctorates are those from Yale, Harvard, Northwestern and Cambridge universities and from The Juilliard School. A provocative writer, he is author of the highly acclaimed autobiography Hallelujah Junction and is a frequent contributor to The New York Times Book Review. Since 2009 Mr. Adams has been Creative Chair of the Los Angeles Philharmonic.

Born and raised in New England, Mr. Adams learned the clarinet from his father and played in marching bands and community orchestras during his formative years. He began composing age ten and his first orchestral pieces were performed while he was still a teenager. In 2017, he celebrated his 70th birthday with festivals of his music in Europe and the US, including special retrospectives at London’s Barbican, Cité de la Musique in Paris, and in Amsterdam, New York and Geneva, among other cities. In 2019 he was the recipient of both Spain’s BBVA ‘Frontiers of Knowledge’ award and Holland’s Erasmus Prize “for notable contributions to European culture, society and social science.”

Conducting highlights in 2019/20 included performances with the Los Angeles Philharmonic, The Philadelphia Orchestra and the Netherlands Radio Philharmonic Orchestra. Mr. Adams made his first appearance with the Orchestre Philharmonique de Radio France in February 2020, giving the European premiere of his latest piano concerto Must the Devil Have All the Good Tunes? together with  Icelandic pianist Víkingur Ólafsson.

Recent recordings include Grammy-nominated albums Doctor Atomic (featuring the BBC Symphony Orchestra and BBC Singers conducted by Mr. Adams, with Gerald Finley and Julia Bullock) and Scheherazade.2, a dramatic symphony for violin and orchestra written for Leila Josefowicz, as well as Must the Devil Have All the Good Tunes? (written for and performed by Yuja Wang, together with the Los Angeles Philharmonic under Gustavo Dudamel) and the Berliner Philharmoniker’s ‘John Adams Edition’, a box set comprising seven of his works, conducted by Rattle, Dudamel, Petrenko, Gilbert and Adams. The official John Adams website is www.earbox.com.

In addition to 2021 Festival artist Miranda Cuckson, Julia Bullock, Davóne Tines, and Jay Campbell will make a welcome return to Ojai, having participated memorably in past Festivals. Prior to AMOC, Ojai has welcomed only two ensembles as Music Director: Emerson String Quartet in 2002 and Eighth Blackbird in 2009. Initial details of AMOC’s 2022 Festival will be announced in the coming months.

Ara Guzelimian, Artistic & Executive Director
Ara Guzelimian is Artistic & Executive Director of the Ojai Music Festival, beginning in that position in July 2020. The appointment culminates many years of association with the Festival, including tenures as director of the Ojai Talks at the Festival and as Artistic Director 1992-97. Ara Guzelimian stepped down as Provost and Dean of the Juilliard School in New York City in June 2020, having served in that position since 2007. At Juilliard, he worked closely with the President in overseeing the faculty, curriculum and artistic planning of the distinguished performing arts conservatory in all three of it divisions – dance, drama and music. He continues at Juilliard as Special Advisor, Office of the President.

Previously, Ara Guzelimian held the position of Artistic Administrator of the Aspen Music Festival and School in Colorado and he was long associated with the Los Angeles Philharmonic at the beginning of his career, first as producer for the Orchestra’s national radio broadcasts and, subsequently, as Artistic Administrator. Mr. Guzelimian is editor of Parallels and Paradoxes: Explorations in Music and Society (Pantheon Books, 2002), a collection of dialogues between Daniel Barenboim and Edward Said. In September 2003, Mr. Guzelimian was awarded the title Chevalier des Arts et des Lettres by the French government for his contributions to French music and culture.

The Ojai Music Festival
The Ojai Music Festival represents an ideal of adventurous, open-minded and open-hearted programming in the most beautiful and welcoming of settings, with audiences and artists to match its aspirations. As its 75th anniversary approaches, the Festival remains a haven for thought-provoking musical experiences, bringing together innovative artists and curious audiences in an intimate, idyllic outdoor setting. Each Festival’s narrative is guided by a different music director, whose distinctive perspectives shapes programming ensuring energized festivals year after year.

Throughout each year, the Ojai Music Festival contributes to Southern California’s cultural landscape with in-person and online Festival related programming as well as robust educational offerings that serve thousands of public-school students and seniors.  The organization’s apex is the world renowned four-day Festival which takes place in early June in Ojai, a breathtaking valley only 75 miles from Los Angeles, that transforms into a platform for the fresh and unexpected. During the immersive experience, a mingling of the most curious take part in concerts, symposia, free community events, and social gatherings. Considered a highlight of the international music summer season, Ojai welcomes 7,000 patrons during the intimate Festival weekend and reaches 35 times more audiences worldwide through live and on-demand streaming of concerts and discussions.

Having spent the past year away from in-person concerts, Rhiannon Giddens and Francesco Turrisi found themselves drawn to the music of their native and adoptive countries of America, Italy, and Ireland. The result is their latest album, They’re Calling Me Home, which speaks of the longing for the comfort of home as well as the metaphorical “call home” of death, which has been a tragic reality for so many throughout the past year.

Carlos SIMON   Fate Now Conquers
MOZART  Piano Concerto in C minor, K491
John ADAMS    Am I in Your Light (from Dr Atomic)
John ADAMS    Consuelo’s Dream (from I was Looking at the Ceiling and Then I saw the sky)
Gabriela ORTIZ   La Calaca   World Premiere of revised version