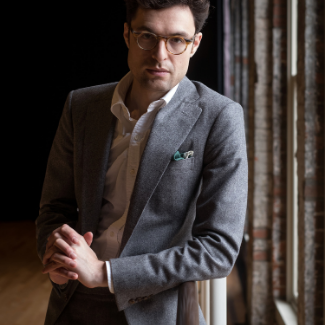 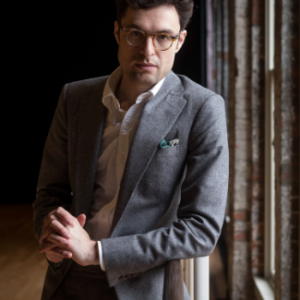 Timo Andres (b. 1985, Palo Alto, CA) is a composer and pianist who grew up in rural Connecticut and lives in Brooklyn, NY. A Nonesuch Records artist, his album of orchestral works, Home Stretch, has been hailed for its “playful intelligence and individuality,” (The Guardian) and of his 2010 debut album for two pianos Shy and Mighty (performed by himself and duo partner David Kaplan), Alex Ross wrote in The New Yorker that “it achieves an unhurried grandeur that has rarely been felt in American music since John Adams came on the scene… more mighty than shy, [Andres] sounds like himself.”

Notable works include Everything Happens So Much for the Boston Symphony with Andris Nelsons; Strong Language, a string quartet for the Takács Quartet, commissioned by Carnegie Hall and the Shriver Hall Concert Series; Steady Hand, a two-piano concerto commissioned by the Britten Sinfonia and premiered at the Barbican with Andres and pianist David Kaplan; and The Blind Banister, a piano concerto for Jonathan Biss, which was a 2016 Pulitzer Prize Finalist.

As a pianist, Timo Andres has appeared with the LA Phil, North Carolina Symphony, the Britten Sinfonia, the Albany Symphony, New World Symphony, and in many collaborations with Andrew Cyr and Metropolis Ensemble. He has performed solo recitals for Lincoln Center, Wigmore Hall, San Francisco Performances, the Phillips Collection, and (le) Poisson Rouge. Among others, Andres has collaborated with Ted Hearne, Becca Stevens, Jeffrey Kahane, Gabriel Kahane, Brad Mehldau, Nadia Sirota, the Kronos Quartet, the LA Dance Project, John Adams, and Philip Glass, with whom he has performed the complete Glass Etudes around the world, and who selected Andres as the recipient of the City of Toronto Glenn Gould Protégé Prize in 2016.

Recent and upcoming projects include a new work for the Calder Quartet through the LA Phil, premiered at Noon to Midnight; a major choral-orchestral work for the Orchester Cottbus Staatstheater, Land Mass; orchestrations for Sufjan Stevens and New York City Ballet for Justin Peck’s “Principia”; and dates at the Elbphilharmonie Hamburg, the Neue Galerie, and the Big Ears Festival with vocalist Theo Bleckmann. In November 2019, Andres curates (and performs in) “American Perspective,” a concert with the Cincinnati Symphony, André de Ridder, Dance Heginbotham, and cellist Inbal Segev, playing his concerto, Upstate Obscura. In April 2020, Carnegie Hall presents him in a piano recital at Zankel Hall, playing works by himself, John Adams, Nico Muhly, Robin Holcomb, Philip Glass, Donnacha Dennehy, Louis Andriessen, and the world premiere of a commissioned work by Gabriella Smith.

Timo Andres earned both his bachelor’s and master’s degrees from the Yale School of Music. He is a Yamaha/Bösendorfer Artist and in 2018 joined the composition faculty at Mannes School of Music.