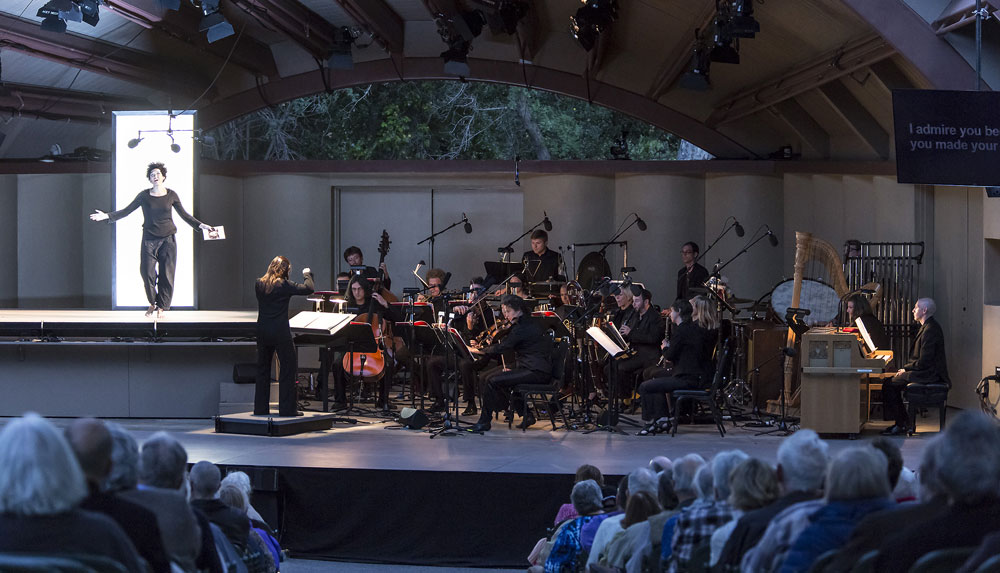 The 2016 Ojai Music Festival with Music Director Peter Sellars embodied the spirit of the Festival with an openness to exploration and risk-taking, adventure and surprise, embracing the new and welcoming the unfamiliar. Relive the 2016 Festival anytime by watching our archived live streaming concerts here.

Feedback from our audience, artists and members of the press is important to us. Read excerpts here or download the full PDF version.

In part because this 70-year-old festival’s musical leadership changes each year, its audience — loyal and attentive, with a bourgeois-bohemian vibe that aptly reflects the sheltered, fragrant Ojai — is unusually open to variation and exploration. And just four days long, the event is compact enough to give the sense that its offerings are the product of a single mind rather than a committee. This was Mr. Sellars’s personal playlist, leave it or — more often — take it. – The New York Times

The role of the work’s narrator (a fictitious sister for Weil created by the librettist, Amin Maalouf) was assumed by the rising soprano Julia Bullock, who lent the performance controlled vigor, tonal purity and fierce commitment – The Wall Street Journal

Her captivating Partita for 8 Voices was a close-harmony vocal exploration by Roomful of Teeth (in which Shaw is a vocalist) of four antique dances that sway and stretch in surprising and captivating contemporary ways. The work won the 2013 Pulitzer Prize for composition. Baritone Davóne Tines and the Calder Quartet’s later performance of Shaw’s By and By (freely set bluegrass and gospel texts) galvanized all present. In the fine acoustics of the Besant Hill School’s Zalk Theater, the rendering by Tines induced tears from many — the composer and Sellars himself among them. – Classical Voice North America

It is not only Saariaho’s work that is gripping, but the entire array of composers on “the front edge” of the next generation that Sellars celebrates. As it happens, most of those brought together for the festival are women, a disparate group with distinctive ideas for the future of music. They, and many of the performers, also represent many countries and multiple continents, brought together to illuminate musical possibilities for the 21st century. – Ventura County Star

If all this sounds like a recipe for confusion, that’s only partly the case. Despite his deliberately esoteric approach, there’s an emotional center to Vivier’s work that this performance managed to communicate very directly to the audience, and many were visibly moved by both the music and the occasion, proving once again that certain musical experiences could only happen in Ojai. – Santa Barbara Independent

Chase silently appeared on stage, an ominously chilly electronic soundscape rising in the background. She launched herself at a tam-tam, rattling and grinding metal sticks along the surface at full fury, before picking up her bass flute. Throwing her whole body into the music, slowly breathing in and whisper-shouting into her instrument, she demonstrated why she is truly one of the most vibrant performers on the concert stage. – I Care If You Listen