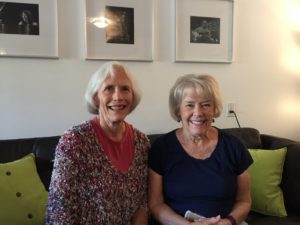 The Ojai Music Festival is pleased to announce Sandra Shapiro and Merrill Williams as new co-chairs of the BRAVO Education Committee. Both Sandra and Merrill are excited to help the program in bringing music programs to school children throughout the Ojai Valley, including Music Van, the Imagine concert, Chumash Music and Culture, Education Through Music (ETM), and the Upbeat Percussion Workshops at Continuing Care Centers.

Sandra Shapiro has lived in Ojai for ten years. As a nurse, she has experience working with new mothers in the post-partum field, as well as in school health. She is currently on the Board of the Nan Tolbert Nurturing Center, a family-directed outreach program to help families with support, education, and emotional care and served as a past president. Sandra has been an active member of the Ojai Festivals Women’s Committee for five years.

Sandra says about the BRAVO program, “This is something that draws people to be a part of supporting the Festival. It is our greater hope, desire, and awareness that children thrive when exposed to and included in musical participation. They have an appreciation of the expressive culture. Music also builds confidence, brain skills in mathematics and logic and the chance for self-expression. This translates into greater confidence and ultimately better citizens. Music and the arts are part of the powerful, ineffable sphere of the human experience.”

Merrill Williams has lived in Ojai for 44 years. Part of her extensive background in marketing and publicity was working for the Ojai Valley Inn and Spa for 15 years as Public Relations Director. There she worked closely with the national and international press. A long-time Festival subscriber, Merrill recently served as past president of the Ojai Festivals Women’s Committee and joined the Festival’s Board of Director in September. Merrill comes from a musical family; her mother was an arranger who specialized in women’s choral music. She would also lead choirs on tours to local schools and prisons. Merrill is firmly aware of the importance of music to our youth, and to society.

For more information on the Ojai Music Festival’s BRAVO education in the schools and community, click here. If you are interested in the BRAVO committee, a voluntary group that meets once a month, contact Laura Walter at 805 646 2094.

Want to help the program? Join us at the Ojai Holiday Home Tour & Marketplace, November 12 and 13, a major fundraiser for the BRAVO education programs!