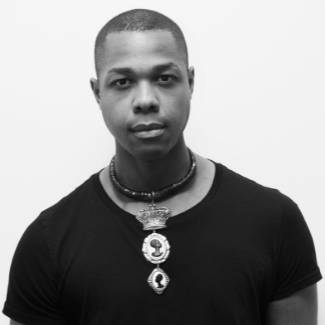 Heralded as “a singer of immense power and fervor” by The Los Angeles Times, Davóne Tines came to international attention during the 2015-16 in breakout performances at the Dutch National Opera premiere of Kaija Saariaho’s Only the Sound Remains directed by Peter Sellars and at the Ojai Music Festival presenting works by Caroline Shaw and Kaija Saariaho with the Calder Quartet and the International Contemporary Ensemble. Recent highlights include the European premiere of David Lang’s prisoner of the state with Ilan Volkov conducting the BBC Symphony, Schumann’s Das Paradies und die Peri with Louis Langrée and the Cincinnati Symphony, John Adams’s El Niño with David Robertson and the Houston Symphony, and Beethoven’s Ninth Symphony with Stéphane Denève and the Saint Louis Symphony.

Davóne Tines was co-creator with Zack Winokur and composer Michael Schachter, as well as co-librettist, of The Black Clown, a music theater experience inspired by Langston Hughes’s poem of the same name that animates a black man’s resilience against America’s legacy of oppression by fusing vaudeville, opera, jazz, and spirituals to bring Hughes’s verse to life onstage.

In summer 2019, Davóne Tines made his Opera Theatre of Saint Louis debut in the world premiere of Terence Blanchard and Kasi Lemmons’s Fire Shut Up in My Bones based on the memoir of the American journalist, commentator, and New York Times op-ed columnist Charles M. Blow. John Adams and Peter Sellars’s Girls of the Golden West was the platform for Davóne Tines’ San Francisco Opera debut, and the work was later given its European premiere by Dutch National Opera. He has appeared at the Opéra national de Paris, and Teatro Real; and made his Brooklyn Academy of Music debut in Matthew Aucoin’s Crossing in a production by multi-Tony Award-winning director Diane Paulus.