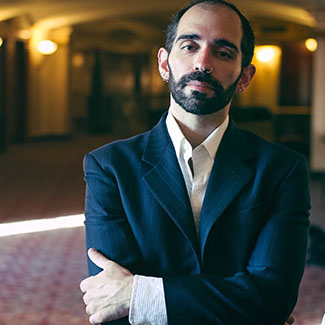 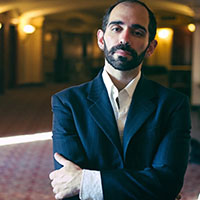 Edo Frenkel is a conductor, composer, and pianist whose work spans the repertoire of the standard western cannon, opera, and experimental music. His work has been described as “groundbreaking … an integration of raw emotion and music” (Rochestariat). His presence at the podium has “ensured performances of both intimacy and intensity” (Opera Magazine). His compositions have been lauded as “A kind of Edgar Varèse-esque cacophony for the Digital Age” (Democrat & Chronicle) that “leaves you aghast.”(kwadratuure.com).

Mr. Frenkel has guest conducted, Ensemble Meitar and Ensemble Mise-en. He was the assistant conductor to Franck Ollu at the Klangspuren Festival with Ensemble Moderne Akademie. In 2018, he served as a Conducting Fellow at the Lucerne Festival where he conducted the Lucerne Festival Academy Orchestra in performances of Kurtag’s Stele and worked as assistant conductor to Simon Rattle in Stockhausen’s Gruppen with the London Symphony Orchestra. Additionally, Mr. Frenkel has performed with Tonkünstler Orchester-Neider Östereich, Ensemble Intercontemporain, JACK quartet, and members of New World Symphony.

Mr. Frenkel served as Barbara Hannigan’s rehearsal pianist, collaborating on the Satie: Socrate project at the Ruhrtriennale Festival in Bochum, Germany and at the Park Ave. Armory in New York city. He has performed alongside jazz legends Peter Erskine and Randy Brecker. Frenkel is the pianist in the Philadelphia Orchestra’s SoundLAB which debuted as ensemble in residence during the Barnes-Stokowski Festival in October 2018.

Mr. Frenkel’s music has been performed in international festivals by artists such as Talea Ensemble, EXAUDI vocal ensemble, Tonküntsler-Orchester Niederösterreich, and Ensemble Paramirabo. He has been featured in such festival’s as Royaumont Voix Nouvelles (France), CEME (Israel), and the ME_MMIX festival (Spain).