From the Vault: Jeremy Denk’s Notes from the 2009 Festival on Bach’s Goldberg Variations 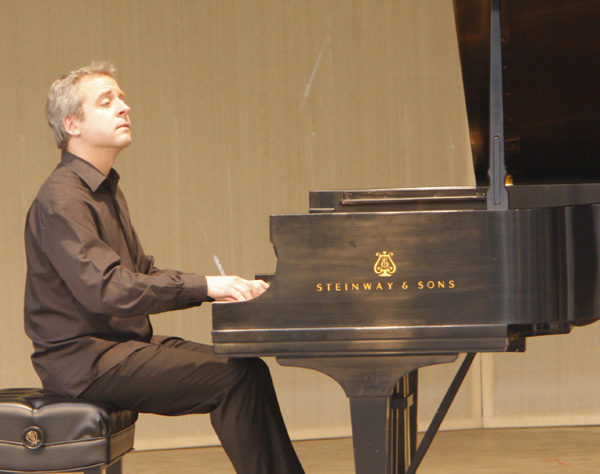 Jeremy Denk made his first appearance in Ojai at the 2009 Festival with Music Director eighth blackbird. The pianist was very thoughtful and helpful in sending over notes for his Saturday Morning Concert, which included Bach’s iconic work, Goldberg Variations (about to be released on Nonesuch Records). As we move forward Jeremy’s return to Ojai – this time as the 2014 Music Director – read about how he first explained this piece, which has become an significant part of his repertoire.

“I think the connection between the Goldbergs and the Ives First Sonata is … opposites attract?  Beauty and the Beast?  This program is a bit like a couple that you would never imagine would get together but, when you hook them up, they suddenly have a lot to say to each other.  I love the idea–a kind of painterly contrast–of the luminous, serene Goldbergs against the dark, raucous Ives Sonata.  An 18th-century German Lutheran and a 19th-century Connecticut farming family may not be all that far apart, in some sense:  they’re both spartan and spiritual.  One of my favorite parts of the Goldberg Variations is the concluding Quodlibet, where Bach takes two common tunes and superimposes them over the Goldberg harmonic ground:  a masterstroke of composition, but also a wonderful joke combining high and low, the profound and profane.  And what could be more Ivesian than that?

For me, the Goldberg Variations is a tripartite cosmos:  a third of the variations are full of humorous keyboard virtuosity, another third are extraordinary canonic demonstrations, and another third are “character pieces,” which draw on the musical world around Bach, almost reproducing that world, like a mural.  The Ives Sonata has interesting parallels to this:  it has a big arching structure of three serious movements, flanking two down-and-dirty scherzos.  The effect is that Ives journeys back and forth from the dark, wintry, severe character of his rural Connecticut family–with their plaintive hymns and ballads–to the totally different, citified world of ragtime, painting in wild contrasts a picture of Ives’s sprawling, uniquely American musical world.” – Jeremy Denk