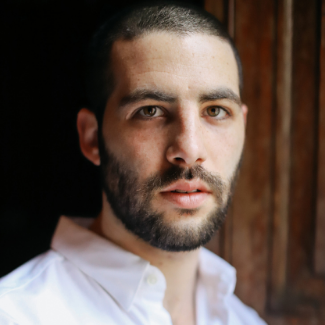 Or Schraiber studied at the Jerusalem Academy of Music and Dance. In 2010, Schraiber joined the Batsheva Dance Company, in which he danced for seven years. In parallel to his time in the company, he served at the IDF for three years. In 2017, Schraiber moved to New York City to study acting at the Stella Adler Studio. In 2019, he starred in and co-choreographed Boaz Yakin’s feature film “Aviva.” Later that year, he starred as Thaddeus and choreographed scenes in Terrence Malick’s The Way of the Wind and appeared in the national Broadway tour of The Band’s Visit.

In 2020, he created five short dance films commissioned by the Corpus Dance Company in collaboration with Bobbi Jene Smith. Later that year, he collaborated with Smith once more to create Solo at Dusk, commissioned by the Los Angeles Dance Project. Throughout the years, Schraiber’s choreography and movement direction have been seen in videos by Wim Wenders, Asaf Avidan, Netta Barzilai, The Antlers, Yemen Blues, and more. He has directed, choreographed, and appeared in several award-winning short films that were presented by film festivals all over the world.