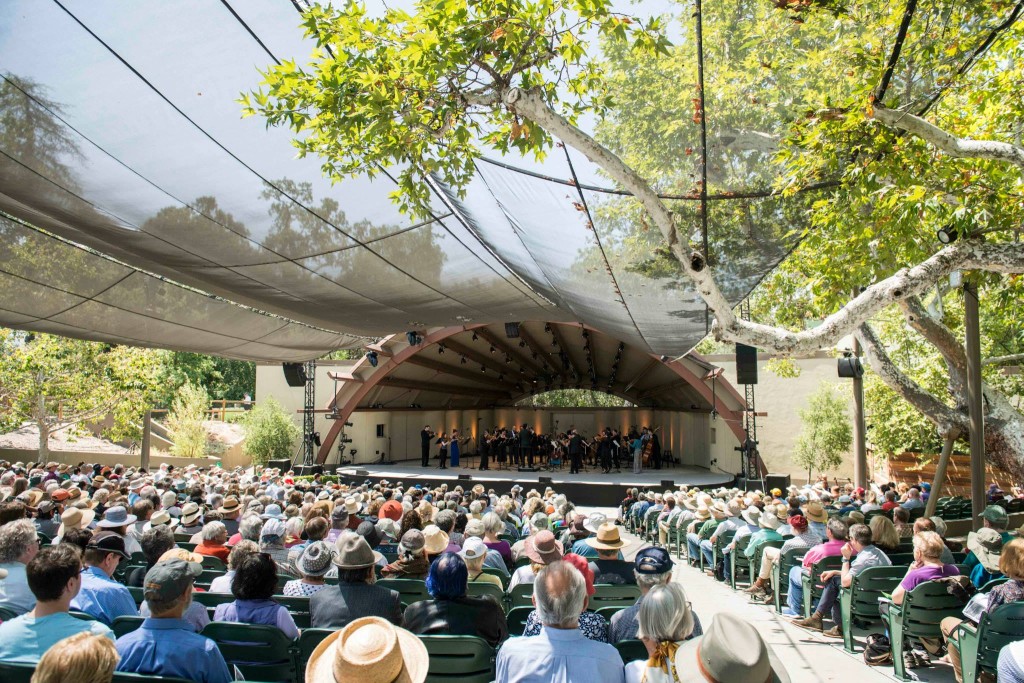 Each June, the Ojai Valley becomes a musical epicenter where audience members, industry leaders, musicians, and members of the press come together and experience innovative programming.

After each Festival, we gather feedback from audience members and colleagues, as well as share press reviews of the 2014 Festival. Read excerpts from the media, and for your convenience, download a complete press review sheet as a PDF here >>

“Like all births, there is something new in the room that wasn’t there before. For Stucky and Denk, this is a fleeting instant of transcendence, namely a miracle.”

“’The Classical Style’ is a mash-up of Glenn Gould at his most satirical, PDQ Bach at his sauciest and a distractedly erudite Rosen cooking up a French sauce while pontificating on harmonic structure in his kitchen. But underlying the jokes (good ones and the groaners) and tomfoolery, Stucky’s resourceful score and Denk’s droll text produce an ingeniously eloquent musing on the meaning of life.”

“…the concert’s second half was a revelation, with the American pianist and composer Uri Caine and his jazz sextet deconstructing aspects of Gustav Mahler’s oeuvre, including the Adagietto of his Fifth Symphony and the conclusion of “Das Lied von der Erde” (for which a cantor was added). Teasing out the earthy building blocks of these complex and deeply felt masterpieces—that is, the folk songs, military marches and Jewish wedding tunes—Mr. Caine and company reimagined Mahler’s Olympian creations in more human-scale terms.”

“On Saturday morning, he [Jeremy Denk] and Jennifer Frautschi performed with exquisite concentration all four of Ives’s Violin Sonatas, over the cawing of a multitude of crows. In typical Ojai fashion, the experience was enhanced by the presence of the vocal ensemble Hudson Shad…”

“…the definitive factor in Ojai, the thing that sets its apart from ordinary concert life, is the programming. Take that away and you just have pretty concerts in a park. For the listening gourmet, Ojai is the place to taste new things, in abundance, and take a break from Tchaikovsky and Brahms meat and potatoes.”

“…the pleasantly nostalgic backdrop offered by Stucky’s well-crafted and wide-ranging score, which empliys faux 18th-century music up to Strauss and Stucky himself. Throughout, conductor Robert Spano showed the Knights, the festival’s ‘resident’ orchestra, at their transparent best.” – Musical America

“He [Jeremy Denk] proved to be a terrific fit for this quirky, brainy, adventuresome little festival…”

“…the area’s most consistently thrilling annual event, there was plenty of incredible music to swoon over, obsess about, or just ponder, albeit in new ways.”

“From that felicitous combination came an effervescent joy in music that Denk emanates by simply being himself, a man of wit and wonder and a performer of infinite possibilities. Musicians and audience alike couldn’t stop smiling with obvious delight as they shared in his bit of musical heaven.”

The Seven Deadly Sins (libretto by Brecht) was a lot of fun, and well sung by bombshell Storm Large, portraying a woman who experienced all seven and then some, and quartet Hudson Shad.

Conductors Eric Jacobson & Kevin Fox, alongside New York’s versatile orchestral collective The Knights and the Ojai Festival Singers left the mixed-age audience of both locals and visitors enraptured by the scope of the multiplicitous beauty and wide-ranging inquiry of the festival’s finale.

– I Care If You Listen