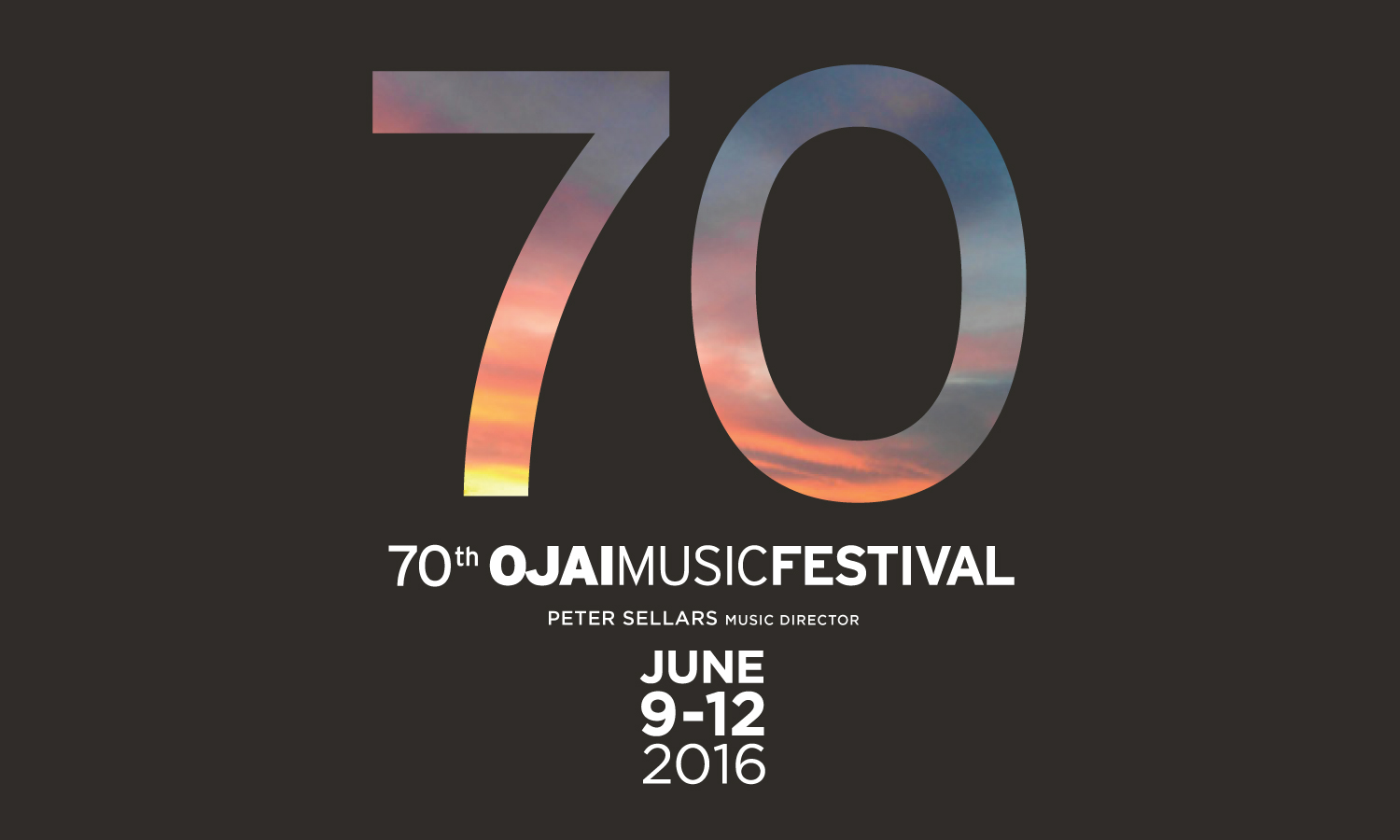 The Ojai Music Festival marks its 70th year in 2016 and to curate this milestone, Artistic Director Thomas W. Morris has invited opera and theater director Peter Sellars to serve as Music Director. For the 2016 Festival, Peter Sellars is shaping a program deeply rooted in the cultures of Ojai, starting new traditions and setting out fresh agendas for the 70 years to come. The Festival will take place June 9-12, 2016.

The Ojai Valley has long been recognized as a rare and beautiful natural site that invites retreat, renewal, and regeneration, from Chumash ceremonial life to Krishnamurti’s legendary talks under the trees. The valley has both grandeur and a human scale that inspire and allow the deepest human questions to resonate, and create a setting for the most personal search for answers. The magical play of light across the canyon and the heady aroma of orange blossoms bring the senses to life, awaken the mind, and create a profound aura of openness and well-being.

Music incites many of the same thoughts and emotions, with similar immensity and intimacy and awe. The 70th Ojai Music Festival will gather this powerful energy and spirit of inquiry and reflection into a weekend of peak experiences and secret revelations.

For the first time the composer Kaija Saariaho will come to Ojai. We will feature two of her most potent and visionary works. Her new chamber version of ‘The Passion of Simone’, a meditation on the life of the courageous French philosopher Simone Weil, written to a wise and humane text by Amin Maalouf, will receive its American premiere with the extraordinary young soprano Julia Bullock. It is a work of startling integrity and permanent challenge in dark times, with a flame of hope that burns brightly and intensely in the darkness.

Kaija Saariaho’s newest operatic creation is a sequence of two Japanese Noh plays in English versions by Ezra Pound, entitled ‘Only the Sound Remains’. Again Ojai will offer the American premiere. These two plays will be performed in the tradition of Japanese Takigi Noh in the amphitheater at the Ojai Valley School Upper Campus, lightly held in the gentle grasp of a protective arroyo under a radiant early morning sky for ‘The Feather Mantle’, a play of illumination, transcendence and evanescence, and just before midnight under an intense starlit sky for ‘Always Strong’, the harrowing and haunted story of a young warrior’s spirit struggling to return to life on earth.

From Tahrir Square in Cairo, Dina El Wedidi and her band come to America to present a new song cycle that paints a personal picture of the realities, aspirations, disappointments, and determination of the Egyptian revolution. Dina El Wedidi epitomizes the new Egyptian women of a rising generation, her gorgeous and unmistakable voice alive with courage, allure, and the breath of freedom. Her band includes traditional Egyptian and modern electronic instruments, and for these performances she will bring three extraordinary older women from the Egyptian zār tradition who are singing in full-throated solidarity with the activism and vision of Dina and her generation.

Julia Bullock will also be the center of a unique and poignant evening honoring the brilliance, daring, public courage, and private tragedies of Josephine Baker, the black icon who created a declaration of independence with her black body, and blazed a trail of irresistible challenge and charm in France in the same years that Simone Weil pursued her feminist vigil on behalf of a larger humanity. Our Ojai evening will be a very personal portrait of a fearless civil rights pioneer and visionary who paid dearly for every forward step. And kept stepping.

The final Sunday of the 2016 festival will shift into an exuberant children’s festival for the first part of the day, featuring music written and performed by, with, and for children and anyone who is ready to listen to the world with fresh ears. Those programs will then expand and flow into a huge street party culminating in sheer communal pleasure, the joy of improvisation, increasingly wild juxtapositions, spontaneous jam sessions and very, very good times.

Among the featured artists at the 70th edition of the Ojai Music Festival, we are extremely pleased and proud to welcome, in addition to ICE (International Contemporary Ensemble), Roomful of Teeth, the path breaking vocal collective, participating in the Kaija Saariaho premieres and surprising new works written for and developed by the group. Classical Indian music will be performed in breathtaking settings at specific times of day to reflect the shifting of the light, and films will be screened during those times when we crave the dark. Talks and lectures that illuminate and amplify our current history with cultural and philosophical perspectives will alternate with sessions focused on spiritual thinkers offering quieter moments of contemplation and peace.

The Ojai Valley sunrises and sunsets will do the rest.

Mr. Morris said, “Peter Sellars, no stranger to Ojai, is a true visionary, and I can think of no better person to lead the Festival’s 70th anniversary. Peter has devised a truly distinctive festival that embraces his vast knowledge and deep commitment to social issues of our time, along with his deep love of Ojai. It will be an audacious experience that includes thrilling music in unusual settings, the greatest of artists, contextual discussions to frame and amplify the music, and provocative films to further enrich our mutual adventure.”

Mr. Sellars is one of the most innovative and powerful forces in the arts, both in America and abroad. His partnership with Ojai dates back to 1992 when he directed a daring version of Stravinsky’s Histoire du soldat with that Festival’s Music Director Pierre Boulez. Mr. Sellars returned to Ojai in 2011, with Music Director Dawn Upshaw, to direct the critically acclaimed world premiere of the staged production of George Crumb’s The Winds of Destiny.