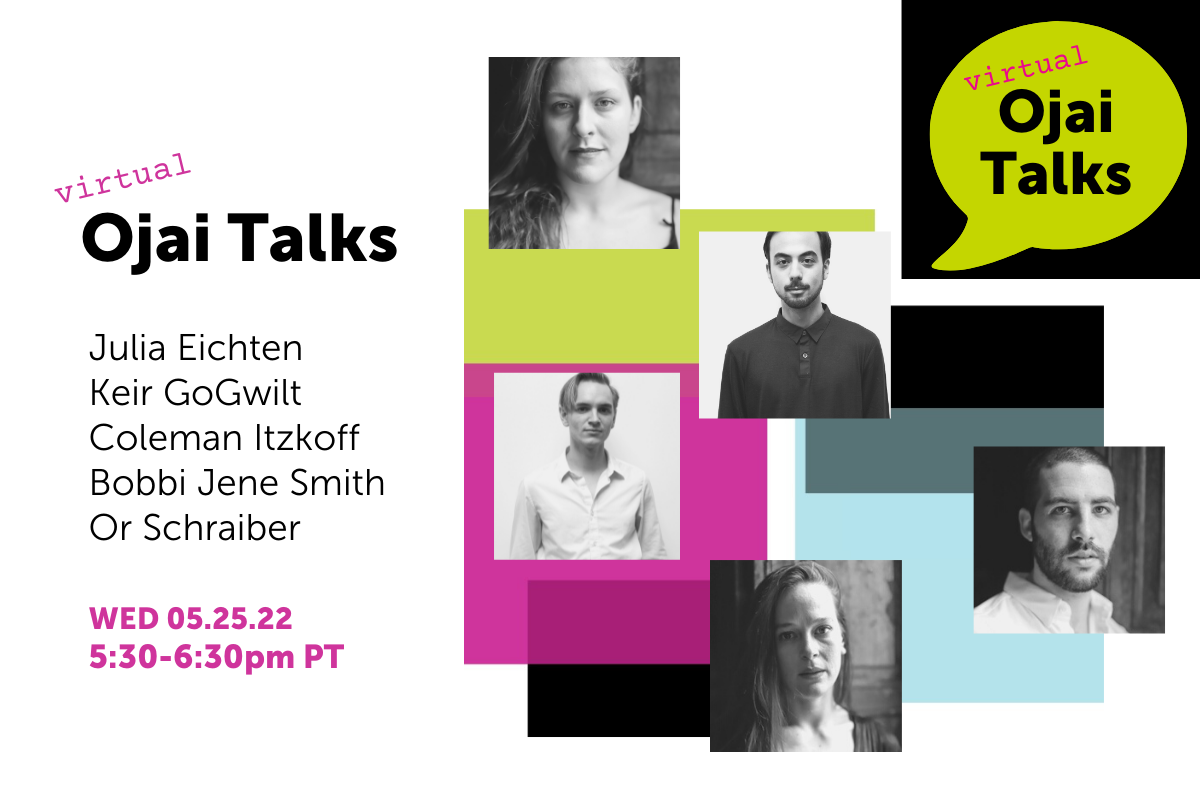 Welcome back to the Festival’s continuing series of Virtual Ojai Talks, where we celebrate the intersection of music, ideas, and the creative process with 2022 Festival artists, composers, innovators, and thinkers.

A new song cycle, the echoing of tenses, commissioned by the Ojai Festival (with a gift in honor of Nancy Sanders) from Anthony Cheung, sets poetry by Asian-American writers interconnected by the larger theme of memory, made complicated by the circumstances of cultural and personal identity. Join us for this illuminating conversation with composer Anthony Cheung and two members of AMOC* – violinist Miranda Cuckson and composer/co-founder Matthew Aucoin.

Messiaen’s HARAWI
WED April 6, 2022 | 5:30-6:30pm
Julia Bullock, Conor Hanick, and Zack Winokur, AMOC members
The Festival will present the world premiere of AMOC’s staging of Messiaen’s song cycle Harawi for soprano and piano. In addition to Julia Bullock and Conor Hanick’s performance, this production breaks open Messiaen’s musical explorations of love and death into a newly theatrical dimension through the choreography of Bobbi Jene Smith and Or Schraiber, directed by Zack Winokur.

The Music of Julius Eastman
Davóne Tines and Doug Balliett, AMOC members
Seth Parker Woods, cello
Episode 3: The legacy of Julius Eastman will come to the 2022 Ojai Music Festival in a multi-dimensional performance piece, reflecting Eastman’s art and the larger context of his life, creativity, and humanity. Showcased in this concert will be AMOC members Davóne Tines and Doug Balliett, along with cellist and frequent AMOC colleague Seth Parker Woods. Join us for another illuminating conversation on the creative process and Eastman’s impact on each of them.

Episode 2: Pianist and AMOC member Conor Hanick joins us for a lively conversation with Ara Guzelimian to talk about his advocacy for performing new works and his recent discovery of pioneering German composer Hans Otte’s The Book of Sounds, which Conor will perform in an epic recital at Ojai in June.

Conor Hanick is regarded as one of his generation’s most inquisitive interpreters of music new and old. A fierce advocate for the music of today, he has premiered over 200 works and collaborated with composers both emerging and iconic. Among them, he has worked with Pierre Boulez, Kaija Saariaho, and Steve Reich, in addition to championing music by leading composers of his own generation, including Caroline Shaw, Matthew Aucoin, Nina Young, Nico Muhly, and Samuel Adams.  Conor appears regularly as a recitalist and chamber musician and in recent seasons has been presented by the Kennedy Center, Carnegie Hall, Caramoor Festival, Park Avenue Armory, and Gilmore Festival. Since 2014 he has been a faculty artist at the Music Academy of the West and in 2018 became the director of its Solo Piano Program.

Episode 1: Co-founders Matthew Aucoin and Zack Winokur of AMOC, 2022 Music Director, talk with Ara Guzelimian on the origin story of this exciting collective of artists

Founded in 2017 by Matthew Aucoin and Zack Winokur, the mission of AMOC (American Modern Opera Company) is to build and share a body of collaborative work. As a group of dancers, singers, musicians, writers, directors, composers, choreographers, and producers united by a core set of values, AMOC artists pool their resources to create new pathways that connect creators and audiences in surprising and visceral ways.