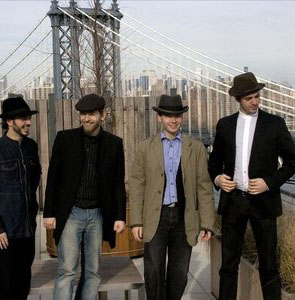 Hailed as “the future of chamber music” (Strings), the game-changing string quartet Brooklyn Rider offers eclectic repertoire in gripping performances that continue to attract legions of fans and draw rave reviews from classical, world, and rock critics alike. NPR credits Brooklyn Rider with “recreating the 300-year-old form of string quartet as a vital and creative 21st-century ensemble”; the Los Angeles Times dubs the group “one of the wonders of contemporary music”; and Vice likens its members to “motocross daredevils who never screw up a stunt.”

Equally at home in clubs and concert halls, the quartet has played venues as varied as Carnegie’s Zankel Hall, the San Francisco Jazz Festival, Le Poisson Rouge, Japan’s Todai-ji, Lincoln Center, Brooklyn’s Littlefield, the Library of Congress, and the South by Southwest Festival. Through visionary programming and global collaborations, Brooklyn Rider’s “down-to-earth demeanor…demystifies contemporary classical music and invites everyone into the tent” (Time Out New York).

In the 2013-14 season, following the release of The Impostor on Deutsche Grammophon/Mercury Classics on which the quartet collaborates with banjo legend Béla Fleck, Brooklyn Rider reunites with the 14-time Grammy Award-winner for a 20-city North American tour. Making stops in Washington DC, Philadelphia, Seattle, Las Vegas, Indianapolis, Birmingham, Toronto, and more, the “banjo quintet” takes to the road this winter with a program of original music by Fleck and other Brooklyn Rider favorites, showcasing repertoire from its recent Mercury Classics album A Walking Fire.  In March, the music of A Walking Fire is also featured in the first of a pair of contrasting programs at the University of Texas at Austin. There, during a weeklong residency, Brooklyn Rider is joined by superstar soprano Dawn Upshaw on a program that will then travel to the University of North Carolina at Chapel Hill.

In recent seasons, the quartet made its UK debut at London’s Barbican Centre with Iranian kamancheh virtuoso Kayhan Kalhor, and performed at the U.S. Open tennis tournament, the Cologne Philharmonie, American Academy in Rome, Malmö Festival in Sweden, the Lincoln Center Festival, the Kimmel Center in Philadelphia, and Texas’s South by Southwest Festival, where it was the only classical group with an official invitation to play. In 2013, the ensemble released A Walking Fire, praised by the Huffington Post as an “intriguing program” on the way to pointing out how Brooklyn Rider has “emerged triumphantly as a headliner.” The quartet also embarked on a second Asian tour and launched its ongoing, cross-disciplinary commissioning project, “The Brooklyn Rider Almanac.”

Brooklyn Rider often appears under the umbrella of outside initiatives begun by all four members of the group individually. In 2003, violinist Johnny Gandelsman created In A Circle, a series of performance events in Lower Manhattan and Brooklyn that explores connections between music and the visual arts. He launched In A Circle Records in 2008 with the release of Brooklyn Rider’s eclectic debut recording, Passport, followed by Dominant Curve in 2010, and Seven Steps in 2012. The first two albums made NPR’s year-end round-ups Best Classical CDs of 2008 and 50 Favorite Albums of 2010, and the third was chosen as an NPR listener favorite. In 2013 In A Circle released violist Nicholas Cords’s solo recording, Recursions.

Brothers Colin and Eric Jacobsen are also co-founders of the New York-based orchestra The Knights, with which all of Brooklyn Rider’s members perform, and which the New York Times calls “an adventurous young orchestra that has established a strong reputation for polished performances and imaginative programming.” The quartet founded Minnesota’s Stillwater Music Festival in 2006 as a place to unveil new repertoire and collaborations, and looks forward to hosting the weeklong chamber festival’s ninth season in August 2014. As an educator, Brooklyn Rider has enjoyed residencies at Williams College, MacPhail Center for the Arts, Dartmouth College, Texas A&M University, Denison University, and UNC Chapel Hill.

Much of Brooklyn Rider’s desire to extend the borders of conventional string quartet programming has come from its members’ longstanding participation in Yo-Yo Ma’s Silk Road Ensemble. With the ensemble, they have performed throughout the world, recorded three albums for Sony Classical, and taken part in educational initiatives, family concerts, museum residencies, and media broadcasts.

A public radio favorite, Brooklyn Rider has been featured on NPR’s Tiny Desk Concerts, On Point, All Songs Considered, Deceptive Cadence, and All Things Considered, WNYC’s Soundcheck, and American Public Media’s Performance Today, as well as on NY1 television in New York City. The ensemble’s recordings are played across North America on stations ranging in focus from classical to world, jazz, pop, and new music.

The quartet’s name is inspired in part by the cross disciplinary vision of Der Blaue Reiter (“The Blue Rider”), the pre World War I Munich-based artistic collective whose members included Vasily Kandinsky, Franz Marc, Arnold Schoenberg, and Alexander Scriabin. In the eclectic spirit of Der Blaue Reiter, the group also draws inspiration from the exploding array of cultures and artistic energy found in the borough of Brooklyn in New York City, a place it calls home.