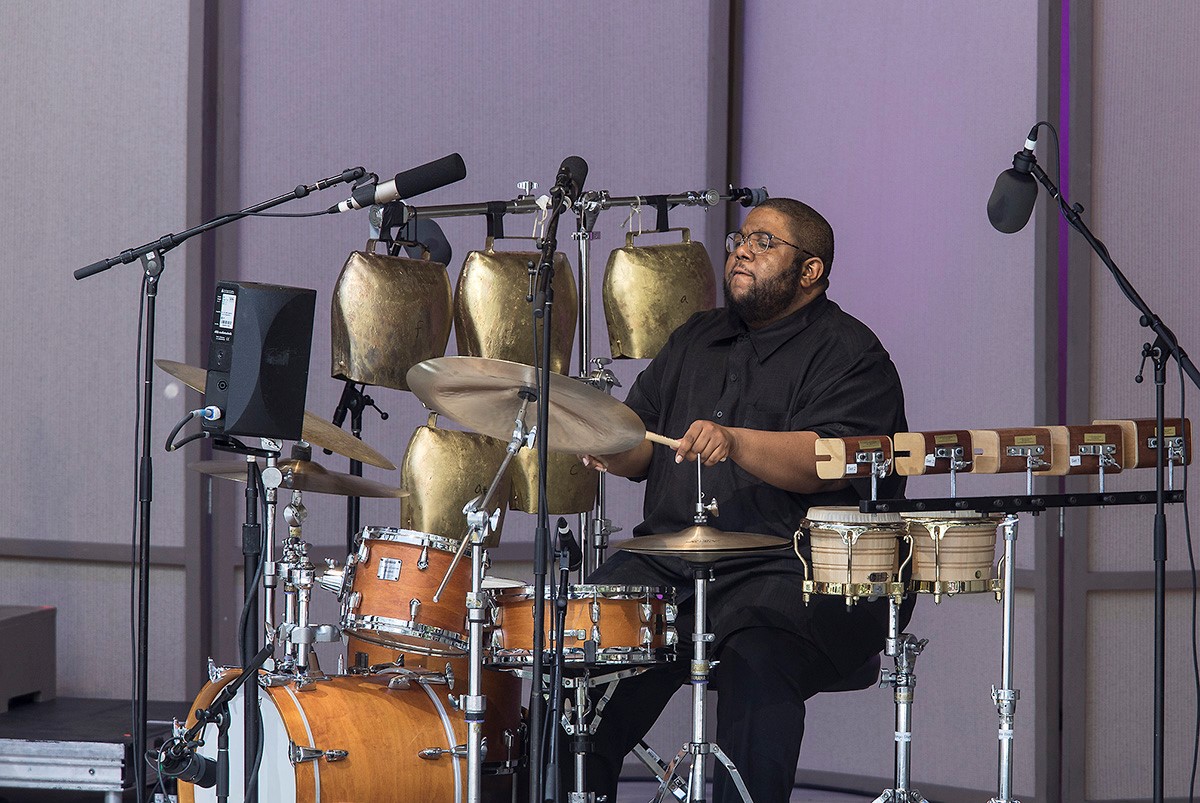 Congratulations to our friend and collaborator Tyshawn Sorey on his appointment as a MacArthur Fellow. Tyshawn’s astonishing creativity has been so evident in Ojai for the last two Festivals – 2016 with Peter Sellars and Julia Bullock, and in 2017 with Vijay Iyer (Sellars and Iyer are themselves MacArthur Fellows). Ojai is an incubator for artists and music, and we can all be proud to see these so honored and recognized with this exciting award. Wonderful and well-deserved news, Tyshawn.” – Thomas W. Morris The MacArthur Foundation recently announced their Class of 2017 recipients popularly referred to as a “genius grant.” This esteemed list included two-time Festival alum Tyshawn Sorey.  A release from The John D. and Catherine T. MacArthur Foundation cited Sorey for “assimilating and transforming ideas from a broad spectrum of musical idioms and defying distinctions between genres, composition, and improvisation in a singular expression of contemporary music.”

A virtuosic percussionist and drum set player who is fluent in piano and trombone, Sorey is an ever-curious explorer of the nature of sound and rhythm, ensemble behavior, and the physicality of live performance. He erodes distinctions among musical genres as well as the line between composition and improvisation and incorporates sophisticated rhythmic and harmonic phrasing, highly prescribed improvisational sound worlds, and real-time experimentation with sound, among many other structural elements. At the same time, he possesses a refined sense of restraint and balance that allows him to maintain his own unique voice while bringing a vast array of musical settings to life. He explores various World and Eastern musical and philosophical concepts on his albums Koan (2009) and Alloy (2014), employing musical languages that range from slowly developing tonally and pantonally based music to free atonal pieces that contain irregular rhythms, lyrical phrasing, and distinctive pacing. Inner Spectrum of Variables (2015) features an extended composition in six movements that merges the harmonic and melodic vocabularies of Western classical, American, and Ethiopian creative expressions, free improvisation, and twentieth-century avant-garde musical traditions. In his song cycle Perle Noire: Meditations for Josephine (2016), Sorey reimagines the legendary Josephine Baker’s works; his original recreations of songs sung by Baker reflect both the context of her contributions to the civil rights movement and contemporary incidences of racial injustice. Sorey challenges expectations of jazz piano trio performance on Verisimilitude (2017), a set of five abstract, enigmatic, and austere pieces in which the delineation between spontaneous and formal composition is even more obscured. In addition to his own work as a composer, conductor, and ensemble leader, Sorey’s prowess as a percussionist and drum set player is well known, and he continues to be in high demand as a sideman for popular creative artists. With his genre-free approach to making music and continuous experimentation, Sorey is rapidly emerging as a singular talent in contemporary musical composition and performance.

The Ojai Music Festival congratulates Tyshawn for joining the ranks of these creative and forward-thinking individuals. Read more here >