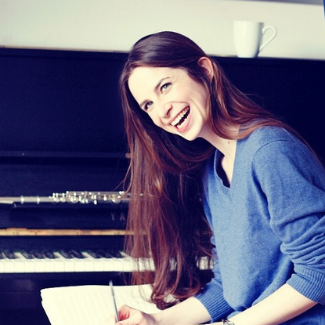 Emi Ferguson can be heard live in concerts and festivals around the world as a soloist and with groups including Camerata Pacifica, AMOC*, the New York New Music Ensemble, the Handel and Haydn Society, and the Manhattan Chamber Players. She has spoken and performed at several TEDX events and has been featured on media outlets including The Discovery Channel, Vox’s “Explained” series on Netflix, Amazon’s The Marvelous Mrs. Maisel, and Juilliard Digital’s TouchPress apps talking about how music relates to our world today.  Her debut album, Amour Cruel, an indie-pop song cycle inspired by the music of the 17th century French court was released by Arezzo Music in September 2017, spending 4 weeks on the Classical, Classical Crossover, and World Music Billboard Charts. Her 2019 album with continuo band RUCKUS, Fly the Coop: Bach Sonatas and Preludes, debuted at #1 on the iTunes classical charts and #2 on the Billboard classical charts, and was called “blindingly impressive…a fizzing, daring display of personality and imagination” by The New York Times. Emi works closely with many composers of our time, developing new works for the flute and can be heard in performances this fall in Ojai, Los Angeles, New Orleans, Boston, Milwaukee and New York. Emi is honored to have shared music as part of the 9/11 memorial over the past decade and was a featured performer alongside Yo-Yo Ma, Paul Simon, and James Taylor at the 10th Anniversary Memorial Ceremony of 9/11 at Ground Zero, where her performance of Amazing Grace was televised worldwide. Her performance that day is now part of the permanent collection at the 911 Museum. Born in Japan and raised in London and Boston, she now resides in New York City. For more information please visit www.emiferguson.com