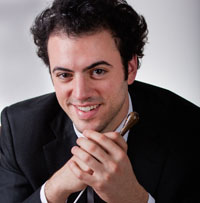 Hailed by the New York Times as “an interpretive dynamo,” conductor and cellist Eric Jacobsen has built a reputation for engaging audiences with innovative and collaborative programming projects. As co-founder and Music Director of adventurous orchestra The Knights and a founding member of genre-defying string quartet Brooklyn Rider, he may take credit for helping to ensure “the future of classical music in America” (Los Angeles Times).

Jacobsen founded The Knights with his brother, violinist Colin Jacobsen, to foster the intimacy and camaraderie of chamber music on the orchestral stage; as the New Yorker reports, “few ensembles are as adept at mixing old music with new as the dynamic young Brooklyn orchestra.” As Music Director, Jacobsen has led the “consistently inventive, infectiously engaged indie ensemble” (New York Times) at New York venues ranging from Carnegie Hall, Lincoln Center, and the 92nd Street Y to Central Park and (Le) Poisson Rouge, besides such international hot spots as the Dresden Musikfestspiele, Cologne Philharmonie, Düsseldorf Tonhalle, and National Gallery of Dublin. Among their recent collaborations are two German tours with cellist Jan Vogler, and a return to the Ravinia Festival for concerts with three of classical music’s brightest stars: cellist Yo-Yo Ma, violinist Itzhak Perlman, and soprano Dawn Upshaw. Upcoming season highlights see Jacobsen conduct Dresden’s Moritzburg Festival Academy with Midori as soloist and the release of an album of Stravinsky’s Dumbarton Oaks Concerto, recorded live in the room where the piece was premiered 75 years earlier.

Under Jacobsen’s baton, The Knights have already issued three albums for Sony Classical: Jan Vogler and The Knights Experience: Live from New York juxtaposes Shostakovich with Jimi Hendrix, while New Worlds celebrates the Americas with works by Copland, Ives, Dvorák, Osvaldo Golijov, and Gabriela Lena Frank. Most recently Mr. Jacobsen and The Knights released an all Beethoven album including the Triple Concert and the Fifth Symphony. On the Ancalagon label, the ensemble released A Second in Silence: a “smartly programmed” (NPR) album pairing Schubert’s “Unfinished” Symphony with the minimalism of Philip Glass, Erik Satie, and Morton Feldman. We Are The Knights, a documentary film produced by Thirteen/WNET, premiered in September 2011.

Also in demand as a guest conductor, Jacobsen led Camerata Bern in the first European performance of Mark O’Connor’s American Seasons, with the composer as soloist. This past season he directed the Detroit Symphony Orchestra and soloist Wu Man in a program of Beethoven, Debussy, and Lou Harrison; performed Schubert, Jennifer Higdon, and Morton Feldman for his Alabama Symphony debut; premiered Dmitri Yanov-Yanovsky’s Sacred Signs in Chicago’s Orchestra Hall with the Silk Road Ensemble and Yo-Yo Ma, and returned to Columbus, Ohio to lead the ProMusica Chamber Orchestra. This coming season Mr. Jacobsen conducts Dresden’s Moritzburg Festival Academy with Midori as soloist; The Greater Bridgeport Symphony, returns to The Alabama Symphony Orchestra, Ravinia Festival, and looks forward to tours both in the US and in Germany with The Knights.

A dedicated chamber musician, Jacobsen is a member of Yo-Yo Ma’s venerated Silk Road Project, participating in residencies and performances at the Art Institute of Chicago, the Hollywood Bowl, and across the U.S., as well as in Azerbaijan, China, Hong Kong, Japan, Malaysia, Abu Dhabi and Switzerland. As a founding member of Brooklyn Rider, dubbed “one of the wonders of contemporary music” (Los Angeles Times), he has taken part in a wealth of world premieres and toured extensively in North America and Europe. His numerous recordings with the two ensembles include Brooklyn Rider’s Seven Steps, which was heralded on its release this year as “an album that should be on everybody’s CD shelf” (Cleveland Classical).

An avid educator, Jacobsen currently serves on the faculty of New York University, conducting its orchestras and teaching both cello and chamber music.