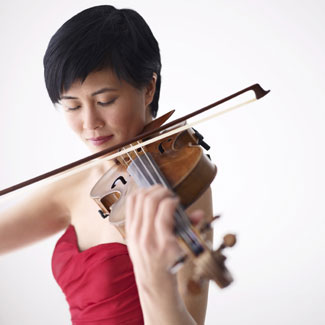 Violinist Jennifer Koh is recognized for her intense, commanding performances, delivered with dazzling virtuosity and technical assurance. With an impassioned musical curiosity, she is forging an artistic path of her own devising, choosing works that both inspire and challenge. She is dedicated to performing the violin repertoire of all eras from traditional to contemporary, believing that the past and present form a continuum. She is also committed to exploring connections in the works she performs, searching for similarities of voice among diverse composers and associations within the works of a single composer. For her forward-thinking approach to classical music, presenting a broad and eclectic range of repertoire and fostering multidisciplinary collaborations with artists of all types and styles, Ms. Koh has been named Musical America’s 2016 Instrumentalist of the Year.

This season, Ms. Koh performs a broad range of concertos that reflects the breadth of her musical interests, including Steven Mackey’s concerto Beautiful Passing with the Baltimore Symphony led by Marin Alsop and Naples Philharmonic led by Eric Jacobsen, Mozart’s First Violin Concerto with the St. Louis Symphony conducted by Nicholas McGegan, Esa-Pekka Salonen’s Violin Concerto with the Cincinnati Symphony led by Santtu-Matias Rouvali, and Sibelius’s Violin Concerto with the New Jersey Symphony Orchestra led by Xian Zhang. Ms. Koh will perform world premieres of violin concertos by Christopher Rountree with the new music collective wild Up as part of Los Angeles Philharmonic’s Green Umbrella “From Noon To Midnight” music marathon, and by Vijay Iyer at the 2017 Ojai Festival. She also performs Mozart’s Violin Concerto No. 3 at Carnegie Hall with the New York String Orchestra led by Jaime Laredo.

Ms. Koh presents a year-long focus on the music of Kaija Saariaho, one of her most notable collaborators. Ms. Koh has premiered numerous works, in performance and on recording, by the Finnish composer including Frises for solo violin and electronics, and Light and Matter and Aure, both with cellist Anssi Karttunen. This season, she performs Ms. Saariaho’s violin concerto, Graal Theatre, with the Curtis 20/21 Ensemble in Philadelphia as part of a collaborative residency that also includes master classes and coachings; the Tampere Philharmonic in Finland; and the Orchestre de Radio France on a program that also features Frises and Light and Matter with Mr. Karttunen. In New York, Ms. Koh performs Ms. Saariaho’s Cloud Trio on a chamber music program with the Variation Trio in its 92nd Street Y debut and Tocar for violin and piano with Shai Wosner as part of a recital for the People’s Symphony Concerts. In the summer of 2016, Ms. Koh and Ms. Saariaho were in residency at the Aspen Music Festival.

Ms. Koh’s foray into curating projects has led her to commission works by today’s foremost composers. Shared Madness comprises short works for solo violin that explore virtuosity for the violin in the 21st century by more than 30 of today’s most celebrated composers, all of whom gifted their music for the project. Shared Madness premiered over two recitals in May 2016 at National Sawdust as part of the New York Philharmonic’s Biennial. Her Bridge to Beethoven recital series, performed with pianist Shai Wosner, explores the impact and significance Beethoven has had on a diverse group of composers and musicians. Pairing Beethoven’s ten sonatas for violin and piano with new works by composers Vijay Iyer, Andrew Norman, and Anthony Cheung over four programs, the project seeks to ignite creative conversations around Beethoven not only as a cornerstone of classical music but as a universal source of inspiration. This season, Ms. Koh perform works from Shared Madness in a recital at the Contemporary Arts Center in Cincinnati, and continues Bridge to Beethoven with Shai Wosner in recital at the Kimmel Center in Philadelphia, and in cities nationwide.

The exploration of Bach’s music and its influence in today’s musical landscape has played an important role in Ms. Koh’s artistic journey. Bach and Beyond, which she launched in 2009 in commemoration of the 325th anniversary of Bach’s birth, is a three recital series that traces the history of the solo violin repertoire from Bach’s Six Sonatas and Partitas to composers ranging from Bartók, Berio, Carter, Salonen, and Ysaÿe with commissions and world premieres by composers John Harbison, Phil Kline, Missy Mazzoli, Kaija Saariaho, and video artist Tal Rosner. Another project that presents works in response to Bach is Two x Four, which explores mentorship and collaboration between teacher and student and shows how performance traditions and composition practices are passed from generation to generation. Two x Four, performed with Ms. Koh’s former teacher, violinist Jaime Laredo, features double violin concerti by Bach, Philip Glass, Anna Clyne, and David Ludwig, the latter of the two being commissioned and premiered as part of the project. Bach & Beyond Parts 1 and 2, and Two X Four with Mr. Laredo and the Curtis 20/21 Ensemble, have been released on recordings by Cedille Records.

Ms. Koh brings the same sense of adventure and brilliant musicianship to her recordings as she does to her live performances. Her latest album, Tchaikovsky: Complete Works for Violin and Orchestra with the Odense Symphony Orchestra conducted by Alexander Vedernikov, released in September 2016, is Ms. Koh’s eleventh recording for the Cedille Records label. Ms. Koh first performed Tchaikovsky’s Violin Concerto conducted by Mr. Vedernikov in the final round of the International Tchaikovsky Competition for Young Musicians in 1992 and went on to win the International Tchaikovsky Competition in Moscow with the concerto in 1994. In addition to her Bach & Beyond and Two x Four albums, her discography on Cedille Records also includes Signs, Games + Messages, a recording of violin and piano works by Janáček, Bartók, and Kurtág with Mr. Wosner; Rhapsodic Musings: 21st Century Works for Solo Violin; the Grammy-nominated String Poetic, featuring the world premiere of Jennifer Higdon’s eponymous work, performed with pianist Reiko Uchida; Schumann’s complete violin sonatas, also with Ms. Uchida; Portraits with the Grant Park Orchestra under conductor Carlos Kalmar with concerti by Szymanowski, Martinů, and Bartók; Violin Fantasies: fantasies for violin and piano by Schubert, Schumann, Schoenberg, and saxophonist Ornette Coleman, again with Ms. Uchida; and Ms. Koh’s first Cedille album, from 2002, Solo Chaconnes, an earlier reading of Bach’s Second Partita coupled with chaconnes by Richard Barth and Max Reger. Ms. Koh is also the featured soloist on a recording of Ms. Higdon’s The Singing Rooms with the Atlanta Symphony Orchestra led by Robert Spano for Telarc.

Ms. Koh is the Artistic Director of arco collaborative, an artist-driven nonprofit that fosters a better understanding of our world through a musical dialogue inspired by ideas and the communities around us. The organization supports artistic collaborations and commissions, transforming the creative process by engaging with specific ideas and perspectives, investing in the future by cultivating artist-citizens in partnership with educational organizations. A committed educator, she has won high praise for her performances in classrooms around the country under her innovative “Music Messenger” outreach program. Ms. Koh is a member of the Board of Directors of the National Foundation for the Advancement for the Arts, a scholarship program for high school students in the arts.

Born in Chicago of Korean parents, Ms. Koh began playing the violin by chance, choosing the instrument in a Suzuki-method program only because spaces for cello and piano had been filled. She made her debut with the Chicago Symphony Orchestra at age 11. Ms. Koh is Musical America’s 2016 Instrumentalist of the Year, a winner of the Concert Artists Guild Competition, and a recipient of an Avery Fisher Career Grant. She has a Bachelor of Arts degree in English literature from Oberlin College and studied at the Curtis Institute, where she worked extensively with Jaime Laredo and Felix Galimir.