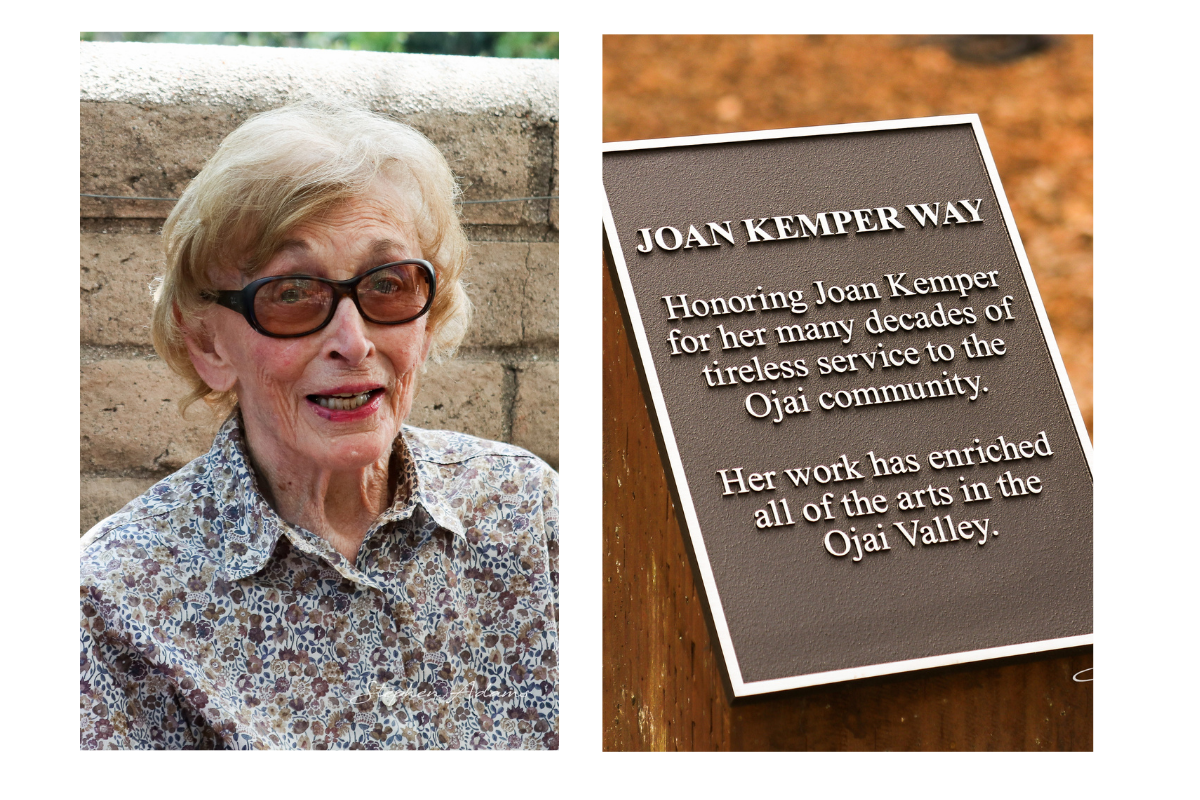 On a characteristically hot and sunny Ojai September day, a small group of people gathered in Libbey Park to honor Joan Kemper, a true community hero. The path connecting the Ojai Art Center with Libbey Park was officially renamed Joan Kemper Way, honoring a woman who has been central to so many community organizations and so many worthy endeavors throughout Ojai. She is one of those treasures who makes the quality of life better not only for those around her but also for so many people she may never meet.

Joan was a relatively recent arrival to Ojai when she stepped in to serve as Executive Director of the Ojai Festival in the early 1990s. I had the huge pleasure of working with her for several years and marveled at her boundless gifts for making things happen. She is one of those remarkable people who has never met a problem she couldn’t solve. The Festival was floundering without leadership at the time she took it over – there was no task to large or small for Joan, who is one of the most persuasive and creative problem solvers I’ve ever met.

In one of my fondest memories, Peter Sellars was directing a fresh re-thinking of Stravinsky’s Histoire du Soldat with Music Director Pierre Boulez conducting in 1992. Peter wanted to capture Stravinsky’s original intent of a certain street-theater atmosphere, updated to the present time. And so he wanted to have a full-size pickup truck on stage at Libbey Bowl to capture that spirit. How to find a loaner pickup truck and get it up on stage? Leave it to Joan to draw upon friends across the community to help with getting the truck, creating a series of safe ramps, and getting it up on stage.

Good things happened whenever Joan is around, particularly throughout the Ojai community. She has a way of rallying people to a common cause, with music and theater being especially close to her heart. She gets you to pitch in and then she makes the whole thing such great fun that you end up thanking her. These days, Joan may slyly say, “you know, I’m basically a hundred years old” – it’s only a slight exaggeration – but her wonderful indefatigable spirit seems to me as lively and inspiring as it was on the day I met her.

I am grateful, like so many others, to travel on Joan Kemper Way! Long may you brighten our lives, Joan.