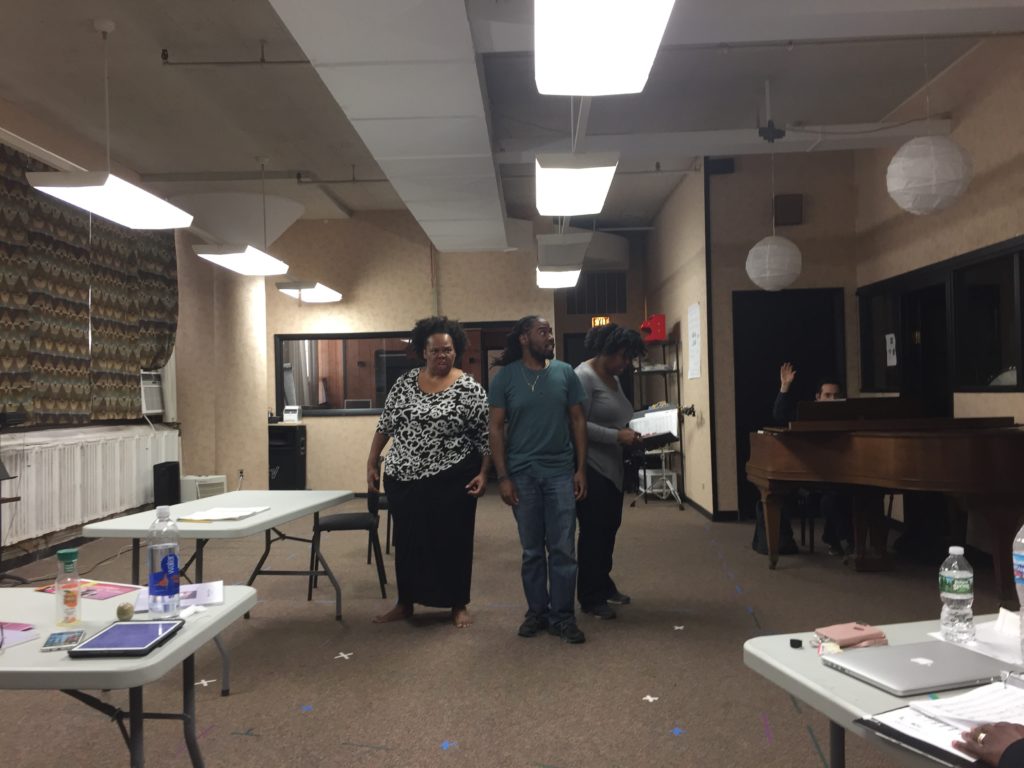 Musical preparations resumed for the 2017 Ojai Music Festival in Chicago over the past two days with staging rehearsals with our three wonderful singers – Joelle Lamarre, Gwendolyn Brown, and Julian Otis – for George Lewis’ Afterword. The opera, which receives its West Coast Premiere in Ojai on Friday June 9, tells the story of the Association for the Advancement of Creative Musicians (the “AACM”) in poetically allegorical form. Rather than assign a large cast of singers to play specific characters in the AACM’s history, George Lewis ingeniously gave three vocalists the task of expressing the ideas that inspired the emergence of the organization. The opera also includes an ensemble of eight musicians from ICE conducted by Steven Schick.

The staging rehearsals were directed by Sean Griffin, our stage director, ably assisted by Narda Alcorn, our production stage manager. Sean, Narda, and the three singers were all involved in the three previous performances of the opera in fall of 2015 in Chicago, Poland, and England, so they have lived with the work.

The Ojai and Berkeley performances will be semi-staged with a simply stylized set. It was remarkable in Chicago to see the story vividly come to life through these three singers who each deeply inhabit the roles. The music is fierce and powerful, befitting the subject. I was overwhelmed with the raw emotion of the story told as if it were being experienced in real time. We are in for a very emotional evening.

The AACM is a common thread throughout this year’s festival. Vijay Iyer traces much of his music through the group and its members. Indeed, many of our artists and composers this year have active relationships with the organization – Wadada Leo Smith, Anthony Braxton, Tyshawn Sorey, Nicole Mitchell, Muhal Richard Abrams, Roscoe Mitchell, and of course George Lewis, who in addition to being a distinguished performer and composer and teacher, wrote the definitive biography of the AACM A Power Stronger than Itself: The AACM and American Experimental Music.

Preceding the performance of Afterword on Friday evening June 9 at 8pm will be a special Ojai Talks moderated by Ara Guzelimian on the Libbey Bowl stage at 7pm. The talk is entitled The AACM: Ongoing Impact. We are honored to have a distinguished panel of AACM founding members Muhal Richard Abrams, Roscoe Mitchell, as well as Tyshawn Sorey and Claire Chase.  The evening will be a historic and moving  opportunity to learn about, and experience through music, this remarkable chapter in the history of American music. On Sunday June 11 at 10am in the Libbey Bowl, Muhal Richard Abrams, Roscoe Mitchell and George Lewis unite as The Trio in a free and open-to-the-community performance. Not to be missed.

The power of these incredible artists and their music came vividly to life in Chicago these past few days. I look forward with great anticipation to two days of rehearsals with the full instrumental forces in New York May 22 and 23. And then onward to Ojai.