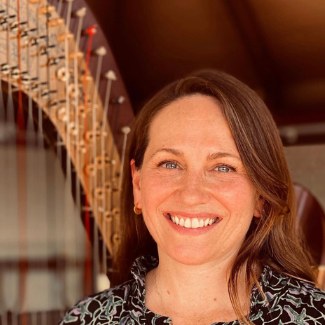 Friday, June 11
Shelley Burgon, harp
11:30am at the Fountain area at Libbey Park
5:00pm at the “Pocket Park” at the Arcade Plaza

Shelley Burgon is a harpist, composer and sound artist who writes and performs ambient
songs for harp, voice and electronics. She has an extensive history as an improvisor and
interpreter of classical new music; performing the works of composers such as Pauline
Oliveros, John Cage, Yoko Ono, James Tenney, Berio and Earle Brown. After many years
of living in NYC where she had the pleasure to perform at renowned institutions such as the
Whitney Museum, MoMA and Issue Project Room Shelley now resides in Ojai, CA. Shelley
has recorded harp for, Bjork, Anthony Braxton, William Tyler, Roberto Lange, Miho Hatori
and for her former band Stars Like Fleas.

Her music has been commissioned by The Merce Cunningham Dance Company for the
Hudson Valley Project at the Dia Museum, Ne(x)tworks, and multimedia artist Katherine
Behar. Film credits include harpist on First Cow, Mission Blue and We Steal Secrets. She will
be releasing her first full length record this year on Thin Wrist Recordings and is working on a
harp meditation series. Visit her website at www.shelleyburgon.com