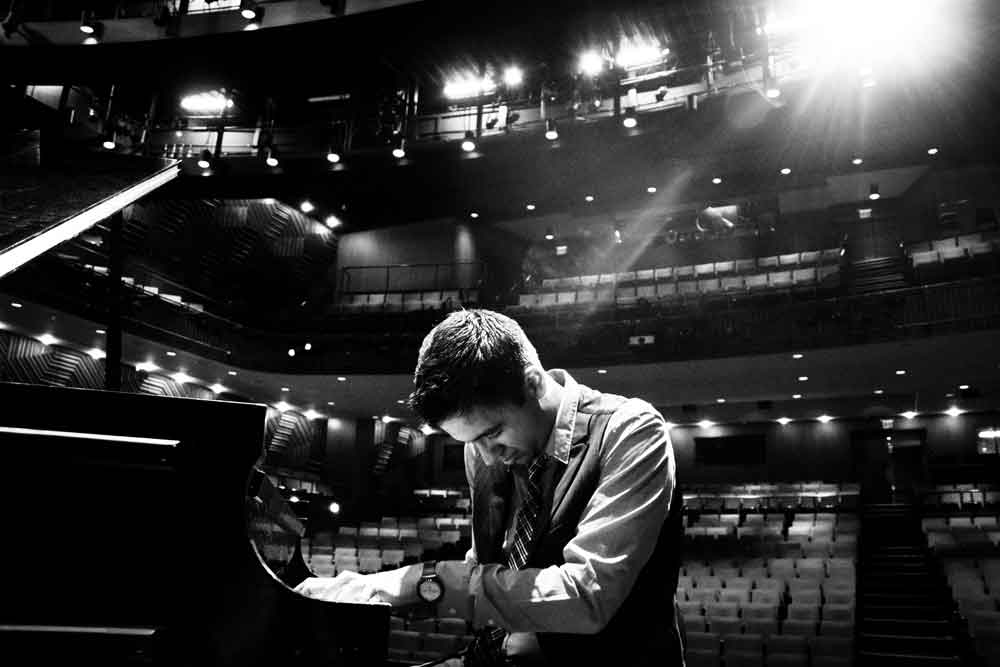 “Musical genre is a twentieth-century concept. Today we can move beyond the dated classification of music into genres like ‘jazz,’ ‘classical,’ ‘experimental,’ and so on; instead there are only communities, and their different ways of making, sharing, and experiencing music. Communities are fluid, porous, and dynamic and can intersect or overlap; you might participate in multiple communities at once. What you will see and hear next year at Ojai is a spectrum of master musicians from disparate communities – composers, performers, improvisers – whose work spans many different systems and approaches. What they have in common, and what binds all of us, is that we listen to each other, and we find ways of making music together.”
– Vijay Iyer, 2017 Music Director.

“Vijay Iyer is one of the most creative artists I know, and his breadth of musicianship, intellect, and curiosity made him an irresistible choice to be the 2017 Music Director. Not only does Vijay possess an extraordinary range of musical collaborators, many of whom will join him in Ojai, but he is devising a program centered on the very creativity of producing music – from composition to performing to improvising,” said Thomas W. Morris. “Joining him will be returning Ojai family, International Contemporary Ensemble (ICE) with conductor, and Ojai’s 2015 Music Director, Steven Schick, Carnatic vocalist Aruna Sairam, and percussionist Tyshawn Sorey. Among the artists who will make their Ojai debuts in 2017 are violinist Jennifer Koh, the Vijay Iyer Trio and Sextet, and composer-performers Wadada Leo Smith and Steve Lehman.”

2017 Festival programming will feature the world premiere of a commissioned violin concerto by Vijay Iyer for violinist Jennifer Koh; the West Coast premiere of George Lewis’ Afterword: The AACM (as) Opera, based on his award-winning book A Power Stronger than Itself; Stravinsky’s Le Sacré du Printemps in a new arrangement for ICE by Cliff Colnot; and Radhe Radhe: Rites of Holi – film by Prashant Bhargava with music by Vijay Iyer, performed with ICE. Additional programming will be announced in the fall.

About Vijay Iyer
The 2017 Festival introduces composer-pianist Vijay Iyer (pronounced “VID-jay EYE-yer”) as Music Director. A Grammy nominee, Iyer was named DownBeat Magazine’s 2015 Artist of the Year and 2014 Pianist of the Year, a 2013 MacArthur Fellow, and a 2012 Doris Duke Performing Artist. He has released over twenty recordings under his own name. The latest, on the ECM label, include A Cosmic Rhythm With Each Stroke (2016), a duo recording with trumpeter Wadada Leo Smith; Mutations, featuring his compositions for piano, string quartet, and electronics; Radhe Radhe: Rites of Holi, a film by Prashant Bhargava, with Iyer’s score performed by the International Contemporary Ensemble (ICE); and Break Stuff, featuring the Vijay Iyer Trio. Iyer is the Franklin D. and Florence Rosenblatt Professor of the Arts in the Department of Music at Harvard University, and the director of the Banff International Workshop in Jazz and Creative Music. His compositions have been commissioned by Arturo O’Farrill, American Composers Orchestra, Bang on a Can All-Stars, Brentano Quartet, Brooklyn Rider, Imani Winds, ICE, Jennifer Koh, Matt Haimovitz, and Yo-Yo Ma’s Silk Road Ensemble. He is a Steinway artist.

Series Passes for 2017 Ojai Music Festival
Advance 2017 series subscriptions are now available for purchase. To order, come to the box office during the Festival weekend, order online at www.Ojaifestival.org, or by calling 805 646 2053