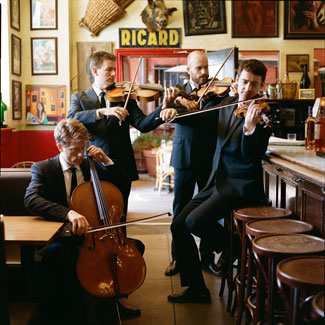 The Calder Quartet, called “outstanding” and “superb” by the New York Times, performs a broad range of repertoire at an exceptional level, always striving to channel and fulfill the composer’s vision. Already the choice of many leading composers to perform their works – including Christopher Rouse, Terry Riley and Thomas Adès – the group’s distinctive approach is exemplified by a musical curiosity brought to everything they perform, whether it’s Beethoven, Mozart, Haydn, or sold-out rock shows with bands like The National or The Airborne Toxic Event. Winners of the 2014 Avery Fisher Career Grant, they are known for the discovery, commissioning, recording and mentoring of some of today’s best emerging composers (over 25 commissioned works to date).

The group continues to work and collaborate with artists across musical genres, spanning the ranges of the classical and contemporary music world, as well as rock, and visual arts; and in venues ranging from art galleries and rock clubs to Carnegie and Walt Disney concert halls. Inspired by innovative American artist Alexander Calder, the Calder Quartet’s desire to bring immediacy and context to the works they perform creates an artfully crafted musical experience.

In 2012-13, the Calder Quartet continued an impressive run of collaborations and commissions with concerts across the globe. In the spring of 2013, the quartet performed Terry Riley’s The Sands with the Cleveland Orchestra. The quartet debuted at Vancouver’s Music on Main/Modulus Festival, opened both the Chamber Series and Parallels Series at Amherst College, and premiered three new works at L.A.’s Getty Museum. The group continued its regular concerts with ArtPower UC San Diego, returned to Australia with an appearance at the Adelaide Festival (with Iva Bittova) and made its London debut at the 2013 Barbican Festival. The group has also maintained an active recording schedule. The quartet with pianist Gloria Cheng recorded works by Messaien and Saariaho for the Harmonia Mundi release entitled The Edge of Light. They also teamed with pianist Anne-Marie McDermott to record Mozart concertos for Bridge Records.

Other recent highlights include a premiere of a new clarinet quintet by Aaron Jay Kernis at La Jolla Music Society SummerFest; and performances at the Laguna Beach Festival alongside Joshua Bell and Edgar Meyer, and at Stanford Lively Arts and Le Poisson Rouge (NYC) with Grammy-winning pianist Gloria Cheng. The quartet debuted at the Edinburgh International Festival (broadcast on BBC-3), and made its Austrian debut at the Esterhazy Palace. They have performed at top halls and festivals across the globe including Carnegie Hall, Washington Performing Arts Society, Santa Fe Chamber Music Festival, Cleveland Museum of Art, Melbourne Festival, Walt Disney Concert Hall, Big Ears Festival in Knoxville, New Haven’s International Festival of Arts and Ideas, and Hollywood Bowl.

The group has long-standing relationships with composers Terry Riley, Christopher Rouse and Thomas Adès. The Calder Quartet first met Riley when they shared a concert as part of the L.A. Philharmonic’s Minimalist Jukebox Festival in 2006. They subsequently released a limited edition vinyl release of Riley’s Trio and Quartet in commemoration of the composers’ 75th birthday. The Calder is the first quartet in two decades to have a work written for them by composer Christopher Rouse. An album of works by Rouse, called Transfiguration, was released in 2010. After featuring the music of Thomas Adès on their first recording in 2008 (along with Mozart and Ravel), the group worked directly with the composer on a performance of Arcadiana as part of the Green Umbrella Series at the Walt Disney Concert Hall. The relationship evolved into collaborating on concerts together at the Stockholm Philharmonic Orchestra’s Konserthuset in 2009, the Melbourne Festival in 2010, and at CAL Performances in 2011. Of the Stockholm performance, the Guardian said, “the Calder Quartet played the most insightful and moving performance of Thomas Adès’s Arcadiana I’ve ever heard.”

In 2011 the Calder Quartet launched a non-profit dedicated to furthering its efforts in commissioning, presenting, recording, and education. The non-profit has co-commissioned works with the Getty Museum, Segerstrom Center for the Arts, and the Barbican Centre; funded the recording of 12 string quartets commissioned for the Calder Quartet by emerging composers; and made possible visits to Inner City Arts and Chinatown’s Castelar Elementary as part of LA’s Best.

The Calder Quartet formed at the University of Southern California’s Thornton School of Music and continued studies at the Colburn Conservatory of Music with Ronald Leonard, and at the Juilliard School, where it received the Artist Diploma in Chamber Music Studies as the Juilliard Graduate Resident String Quartet. The quartet regularly conducts master classes and has been featured in this capacity at the Colburn School (where the quartet was in residence for three years), the Juilliard School, Cleveland Institute of Music, University of Cincinnati College Conservatory and USC Thornton School of Music.