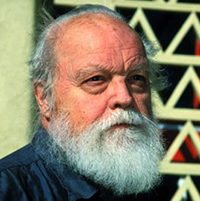 In honor of Lou Harrison’s birthday (May 14), we’d like to share a few pieces of writing kindly sent to us by composer John Luther Adams, for whom Harrison was a long-time mentor and friend. Adams wrote the work ‘for Lou Harrison,’ to be performed at this year’s Festival on Saturday Evening, in 2003-2004. Below are Adams’ notes for the piece, as well as an essay on the work by Peter Garland:

“Lou Harrison was a generous friend and wise mentor to me for almost 30 years. His faith in and support of my music was a decisive influence in my life. I learned more from my time with Lou than from any of my institutional studies. And he was an inspiring model of how to live, without regret or bitterness, as an uncompromising independent composer.

Composed in 2003-2004, for Lou Harrison completes a trilogy of large-scale memorial works that also includes Clouds of Forgetting, Clouds of Unknowing (1991-95) and In the White Silence (1998).

for Lou Harrison encompasses the most lush textures in my music to date, moving in four tempo layers (in the proportions 4/5/6/7) throughout. Rising arpeggios over sustained harmonic clouds alternate with long solo lines over “procession-like” material in nine continuous sections –each grounded in a different five-, six- or seven-tone harmony. The formal structures of the composition recur throughout the score, but the sound of the music is always changing.

for Lou Harrison was not commissioned. I composed this work because I was compelled to do so in response to the passing of one of the most important figures in my life. Amid the daunting realities of today’s world, Lou Harrison and his joyful ecumenical life and music seem more vital and more pertinent than ever.”