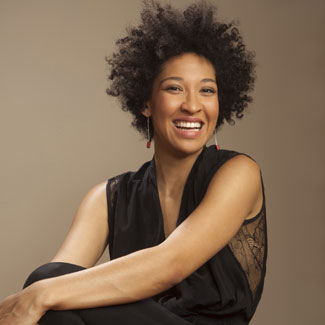 Julia Bullock, equally at home with concert repertoire and opera, has been hailed for her versatile talent. This season, she appeared as soloist with the London Symphony Orchestra and Simon Rattle, the New World Symphony with Christian Reif, the Orchestra of St. Luke’s at Alice Tully Hall, and in recitals at the Metropolitan Museum of Art and the Kennedy Center, to name a few. In November, she sang the lead role in the Berlin Philharmonic’s Orchestra Academy performance of Saariaho’s La Passion de Simone, directed by Peter Sellars, which she now reprises at the Ojai Festival.

Last summer she made her debut with the New York Philharmonic and Alan Gilbert, and in 2013 she made her San Francisco Symphony debut in West Side Story, with Michael Tilson Thomas. Bullock performed the title role in Henry Purcell’s The Indian Queen at the Perm Opera House, the Bolshoi, Teatro Real, and the English National Opera. She has toured South America as Pamina in Peter Brook’s award-winning A Magic Flute. Other opera roles include Susanna in Le Nozze di Figaro, Monica in The Medium, and the title roles in Massenet’s Cendrillon, Janaček’s The Cunning Little Vixen, and Ravel’s L’Enfant et les Sortilèges.

As First Prize Winner of the 2012 Young Concert Artists Auditions,Bullock has been presented in recitals across North America. She is also a winner of the 2014 Naumburg International Vocal Competition, and recipient of a 2015 Leonore Annenberg Arts Fellowship, a 2015 Sphinx Foundation Medal of Excellence, the 2015 Richard F. Gold Grant from the Shoshana Foundation, and Lincoln Center’s 2015 Martin E. Segal Award.

She holds degrees from the Eastman School of Music, Bard Graduate Vocal Arts Program, and in 2015 she graduated with an artist diploma from The Juilliard School.