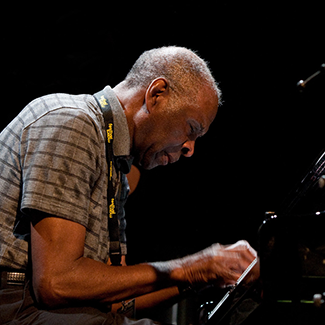 Muhal Richard Abrams has been in the forefront of the contemporary music scene for well over forty years. Muhal is a co-founder of The Association for the Advancement of Creative Musicians (AACM), founder of The AACM School of Music and President of The Association for the Advancement of Creative Musicians, New York City Chapter. Muhal was the first recipient of the grand international jazz award, “The Jazzpar Prize”, which was awarded to him in 1990 by the Danish Jazz Center in Copenhagen, Denmark.. In 1999 Muhal was presented a proclamation by Richard M. Daley, Mayor of the City of Chicago, declaring April 11, 1999 as Muhal Richard Abrams Day in Chicago.

Except for a brief period of study at Chicago Musical College and Governors State University in Chicago, Illinois where he studied electronic music, Mr. Abrams is predominately a self-taught musician who, as a result of many years of observation, analysis, and practice as a performing musician, has developed a highly respected command of a variety of musical styles both as a pianist and composer. The versatile Mr. Abrams and members of The AACM are responsible for some of the most original new music approaches of the last three decades.