From New York: Tom Morris Shares an Inside Look into Rehearsals 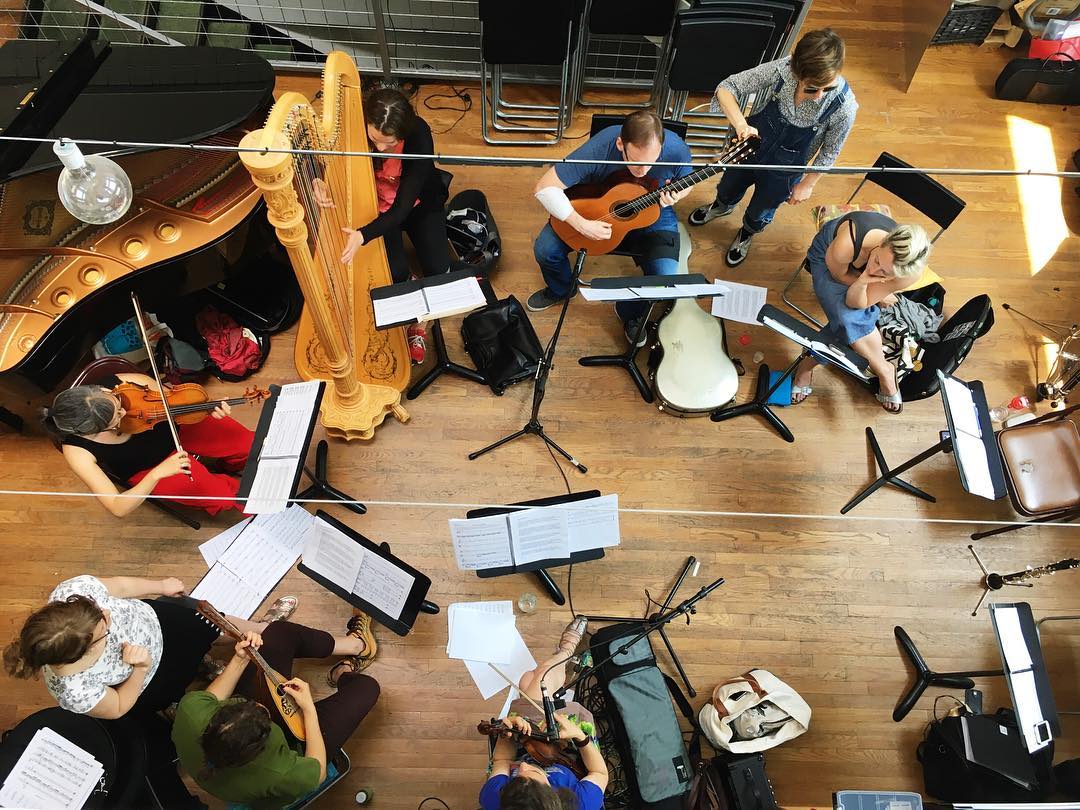 May 27, 2016
I spent the last day at our first rehearsals in New York for Ojai 2016. Most of artists are in New York so it is most efficient to do much of our preparation work there. We will be holding rehearsals there through June 1, and then the artists then come to Ojai June 3 to resume preparations June 4.

Yesterday started with a rehearsal for Josephine Baker A Portrait at ICEhaus, ICE’s home in Brooklyn. Soprano Julia Bullock has long been an advocate of Josephine Baker, the astonishing black American singer who in 1925 emigrated to Paris and became one of the most famous entertainers in the world. For Ojai, Peter Sellars and Julia Bullock have devised a very unique musical portrait of this remarkable artist with new and mind-bending arrangements by composer/drummer/trombonist/pianist Tyshawn Sorey. I first heard of Tyshawn from Vijay Iyer in planning for the 2017 Ojai Festival. Claire Chase suggested last summer that Tyshawn collaborate for the Baker project. The results are simply amazing – fresh, insightful, moving and powerful. The work is scored for Julia Bullock and a small ensemble of ICE payers – violin, flute, bassoon, oboe, and guitar – plus Tyshawn himself 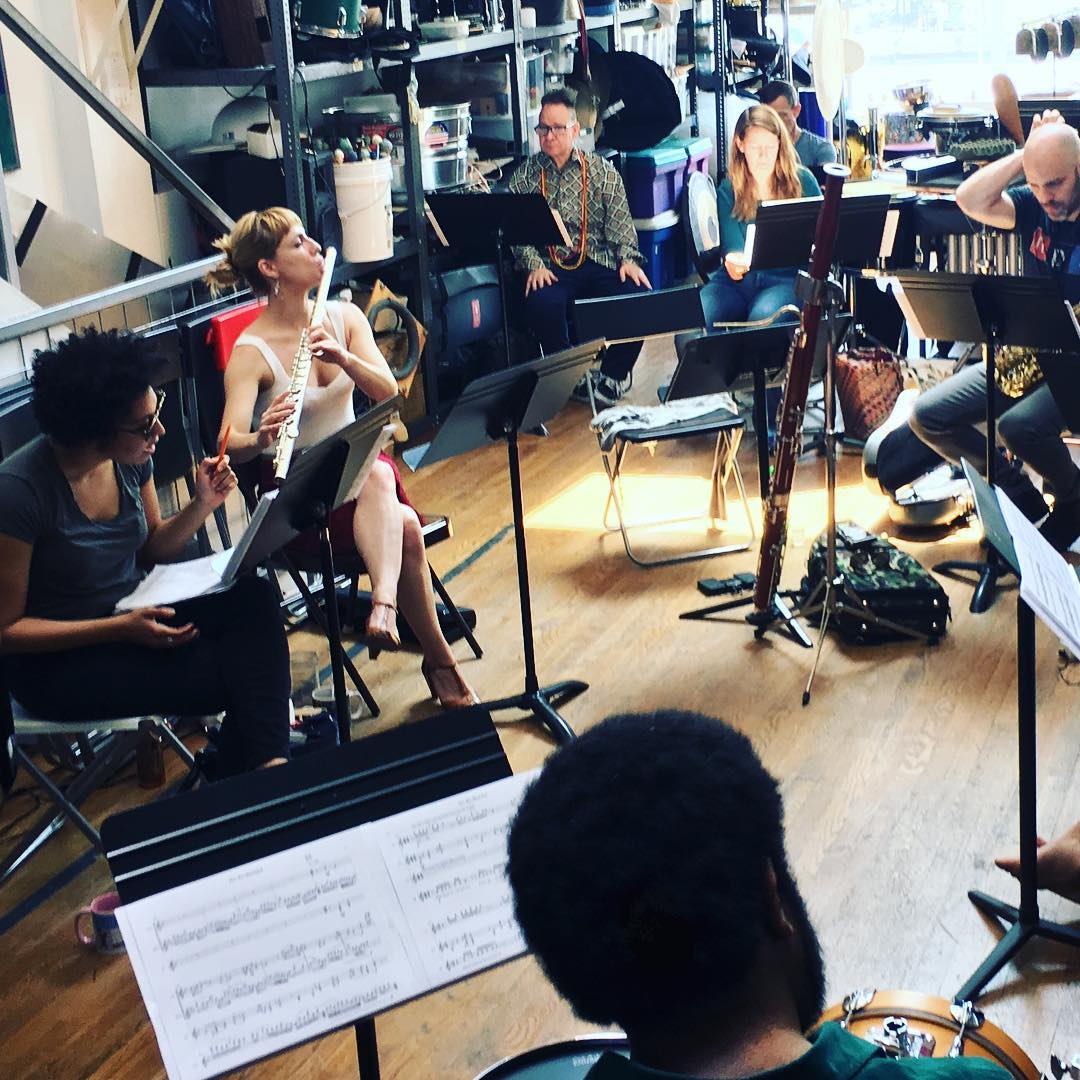 on piano and drums.

This was followed by the arrival of singer/composer/violinist Carla Kihlstedt to rehearse her At Night We Walk in Circles and Are Consumed by Fire. Carla thrilled Ojai audiences in 2009 with her unforgettable performance of Lisa Bielawa’s Kafka Songs for soprano and violin, in which Carla unbelievably performed both parts simultaneously. Carla’s work, a setting of dreams, involves herself as singer with a nine-piece ensemble of ICE, and will be performed Friday afternoon at 3pm. The work is magical.

Finally, I went to the Park Avenue Armory to hear two the first two rehearsals of Claude Vivier’s Kopernikus. This fiendishly difficult work is scored for seven vocalists (all from the remarkable Roomful of Teeth) and seven members of ICE, all masterfully conducted by Eric Dudley, also a member of Roomful of Teeth. As Christopher Hailey has written in the program book, “Kopernikus, more an oratorio than an opera, is a series of scenes depicting the journey of the alto soloist, Agni (the name of the Hindu god of fire), as she encounters, in death, a succession of mythical and historical gures (sung by the other six solo singers), including Lewis Carroll, Merlin, a sorceress, the Queen of the Night, a blind prophet, an old monk, Tristan and Isolde, Mozart, the Master of the Waters, and Copernicus and his mother. “ As Vivier himself writes, “these characters are perhaps the dreams that accompany Agni during her initiation and finally into her dematerialization.” The composer has urged “we not try to read any meaning into what happens but try to feel what’s happening. Not try to understand, but  to enjoy what’s happening. It’s for this reason that it’s written in large part in an invented language of phonetic sounds”. 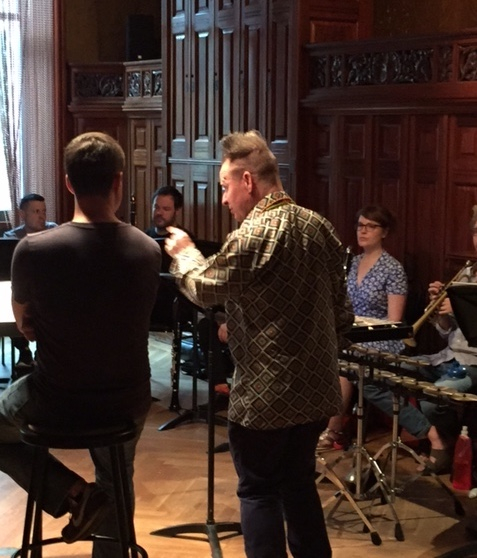 Despite the staggering difficulty and complexity of the music, I was totally unprepared to experience the sheer exhilarating beauty of the music live (I had only previously heard a DVD of a staged performance from Amsterdam), the result of the absolutely incredible virtuosity and commitment of Roomful of Teeth and ICE. Watching Peter Sellars coax, explain, and give meaning to text was a revelation. In planning this festival, Kopernikus was clearly a priority of Peter, who has long believed in the piece, but never done it before. I cannot wait to hear how the many rehearsals develop (there are three more full days of in New York, before three days in Ojai. The work is the final concert in the Libbey Bowl on Sunday June 12 before everyone heads off for the festival finale in Santa Paula.

We are in for some incredible musical experiences week after next!